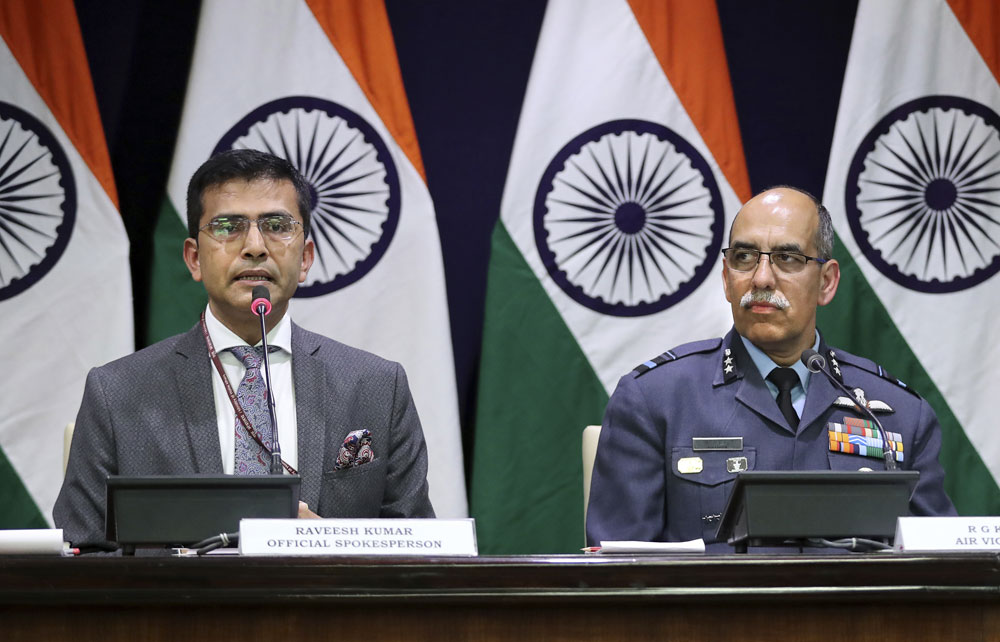 Pakistan on Wednesday captured an Indian Air Force pilot after both countries said they had downed each other’s fighter planes during a daylight aerial operation launched and portrayed by Islamabad as a demonstration of its capability to reciprocate the Indian air strikes on Tuesday.

As the complexion of the cross-border tension changed and war clouds began to take shape on the horizon, an alarmed international community called for de-escalation, fearing an Indian retaliation to what New Delhi has dubbed an “unprovoked act of aggression by Pakistan”.

The White House strongly condemned the intensifying conflict and called on “both sides to take immediate steps to de-escalate the situation”.

“The potential risks associated with further military action by either side are unacceptably high for both countries, their neighbours and the international community,” a US National Security Council official told Reuters on the condition of anonymity.

Pakistan’s Prime Minister Imran Khan went on air to issue his third call for dialogue since the February 14 Pulwama terror attack and described the morning operation as a demonstration of capability that was not intended at causing damage. “If you can come into our country, we can do the same. We simply wanted to show the capability,” Khan said.

New Delhi said what the neighbour had done could not be compared to India’s “pre-emptive” strike that was a counter-terrorism action.

As was the case on Tuesday after India’s strike, the Pakistani response was followed by a day of conflicting narratives from both sides on the nature of the operation and also the number of pilots taken into captivity.

By evening, Pakistan, which had initially said it had two Indian pilots in its custody after bringing down two Indian fighter aircraft, revised the figure to one pilot. India demanded that he be treated well and returned immediately.

Till mid-afternoon, India had denied the capture of the pilot, identified as Wing Commander Abhinandan Varthaman, and the first official confirmation of him being in Pakistani custody came only in the evening after a demarche was issued to Pakistan’s acting high commissioner Syed Haider Shah.

Politically, an element of caution appeared to have crept into the statements by BJP leaders after the Pakistani response and the capture of the IAF pilot. This was in sharp contrast to the mood in the party on Tuesday after the “pre-emptive” strike. As many as 21 Opposition parties expressed “deep anguish over the blatant politicisation of the sacrifices made by our armed forces by leaders of the ruling party”.

New Delhi handed over a dossier to Pakistan with specific details of the Jaish-e-Mohammed’s complicity in the Pulwama attack and the presence of camps run by the terror group and also its leadership in Pakistan. The head of the Pakistan mission was told that “India reserves the right to take firm and decisive action to protect its national security, sovereignty and territorial integrity against any act of aggression or cross-border terrorism”.

According to the only official statement from New Delhi on the Pakistani response — from the foreign office — India said: “Against (Tuesday’s counter-terrorism action), Pakistan has responded this morning by using its Air Force to target military installations on the Indian side.”

At the official briefing, where no questions were taken, foreign office spokesperson Raveesh Kumar said a Pakistan fighter jet had been detected and that the IAF had responded instantly.

“In that aerial engagement, one Pakistan Air Force (PAF) fighter aircraft was shot down by a MiG-21 Bison of the IAF. The Pakistani aircraft was seen by ground forces falling from the sky on the Pakistan side. In this engagement, we have unfortunately lost one MiG-21. The pilot is missing in action,” Kumar said.

He was accompanied by Air Vice-Marshal R.G.K. Kapoor, who did not speak to the media. Neither did he take questions.

Uniformed services personnel were upset with the air vice-marshal’s silence at the media briefing although a pilot was missing. They felt the officer should have spoken, especially because a foreign ministry spokesperson was briefing the media.

Pakistan, however, maintained that its air force undertook strikes across the LoC from within Pakistani airspace and that the targets were non-military, avoiding human loss and collateral damage.

“The sole purpose was to demonstrate our right, will and capability for self-defence. We have no intention of escalation, but are fully prepared to do so if forced into that paradigm,” the Pakistan foreign office said in a statement.

At a briefing, Pakistan’s director-general of Inter Services Public Relations, Maj. Gen. Asif Ghafoor, said that while the PAF locked onto six targets across the LoC, including a military depot, it eventually struck on open ground to ensure there was no collateral damage.

“After we struck, two IAF aircraft crossed into our territory and PAF shot both down. Wreckage of one fighter fell on our side and the other on their side,” he said.

Asked if Pakistan was considering the use of its nuclear warheads, Ghafoor said: “It is insane to talk about it. It is a capability and a weapon of political choice.”

Indicating that it was a decision way above his pay grade, Ghafoor said the ball was in India’s court on whether it wanted an escalation or walk the peace path.

In the aftermath of Pakistan’s retaliation, Prime Minister Narendra Modi and other ministers and the BJP went ahead with their scheduled programmes but none commented on the latest development that forced the shutdown of airports across north India.

The mood in South Block, which houses the defence ministry and the PMO, was sombre, again in stark contrast to Tuesday’s jubilation.

As soon as Pakistan released a video claiming that an Indian pilot had been captured after his jet was brought down, defence ministry and IAF officials closeted themselves in a series of meetings.

An IAF official, however, said there was nothing to be disheartened about the capture of the pilot. “These things happen and this is what we are trained for.”