A former woman colleague had accused him of sexual harassment 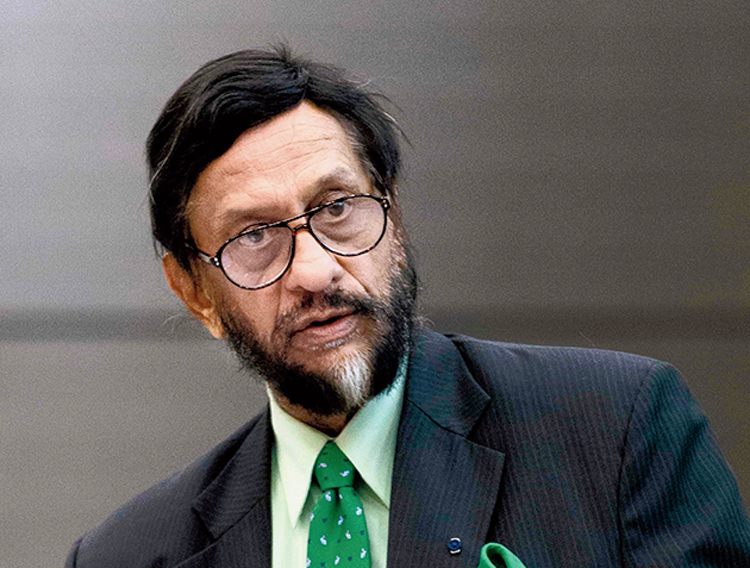 Energy-economist Rajendra Pachauri, who died on Thursday at the age of 79, began his career as an Indian railways engineer, built an academic research institution from scratch and led a UN science agency earning praise from around the world until he was hit by sexual harassment charges.

Pachauri left The Energy and Resources Institute (TERI) New Delhi, the institution he had founded, and resigned from the UN Intergovernmental Panel on Climate Change (IPCC) after a former woman colleague had complained to Delhi police in February 2015, accusing him of sexual harassment.

But TERI wasn’t the only institution he headed where Pachauri faced criticism.

As head of the IPCC, an agency tasked with reviewing climate research, he faced allegations of misleading US lawmakers, allowing the IPCC to exaggerate the threat of global warming on the Himalayan glaciers, and even flying around the world too much.

But Pachauri continued to enjoy respect and support from many scientists and colleagues within and outside TERI who stood by him as he tackled such criticism and battled the sexual harassment charge in Delhi High Court.

Many did so despite the risk of sullying their own reputations. Former colleagues described Pachauri as a shrewd visionary, a master fund-raiser and networker, and a friend in times of distress.

“TERI is what it is because of Dr Pachauri’s untiring perseverance. He played a pivotal role in making it a premier global organisation,” Ajay Mathur, TERI’s director-general who succeeded Pachauri in 2015, said on Thursday.

When Pachauri took over TERI in 1982, it operated from a single room with one other employee — his secretary who wrote out his appointment letter. By 2016, the think-tank had research and outreach activities in 50 countries with revenues from government, corporate and international sources and research funds.

Pachauri started out as a mechanical engineer with the Indian railways in Varanasi in the mid-1960s, helping design diesel locomotives that would soon phase out soot-spewing steam locomotives that still dragged train coaches then.

But wishing to turn to academics and research, he studied industrial engineering and economics in the US, spent a year teaching natural resources economics in a university and then returned to join TERI.

Over the decades, TERI has emerged into a major research think-tank active in multiple areas including energy and environment, industry, biotechnology and policy analysis.

Bill and Hillary Clinton invited him to join their non-profit organisation in an advisory capacity. He drew Hollywood star Arnold Schwarzenegger and former French foreign minister Laurent Fabius among other leaders to annual TERI summits.

Many in TERI recall professional attributes punctuated by personal gestures that appeared to have earned Pachauri the loyalty that withstood the sexual harassment charges he faced.

Rajiv Chhibber, a former TERI employee, recalled the day his year-old son was diagnosed with a blood disorder. Pachauri walked up to him and hugged him in office.

“Don’t worry, Rajiv. If this is what God wanted, we’ll think beyond God,” Chhibber recalled Pachauri saying. He then telephoned doctors he knew at Delhi’s Apollo Hospital where Chhibber had taken his son and urged them to do their best.

But lawyers who specialised in women’s issues asserted that professional and personal credentials are irrelevant in sexual harassment cases. “It is not irreconcilable that a person may be highly proficient at work and a close friend to some people, but may also be guilty of sexual harassment,” lawyer Vrinda Grover had said in 2016.

The IPCC in 2007 under Pachauri’s leadership won the Nobel Peace Prize jointly with Al Gore, former US Vice-President.

However, Pachauri drew criticism at IPCC too. In February 2008, while speaking to US lawmakers, Pachauri said the IPCC while assessing climate change risks and impacts takes into account only peer-reviewed — rigorously scrutinised — research studies.

But in November 2009, an Indian government report challenged an IPCC claim that all Himalayan glaciers would vanish by 2035.

Pachauri initially described the Indian government report as “voodoo science” but had to accept later that IPCC authors had extracted non-peer reviewed and unsubstantiated literature to make the claim about the Himalayas.

He was also picked on as a man who preached energy efficiency but travelled too much. An IPCC document suggests that Pachauri travelled to 108 cities during a 19-month period from January 2007 to July 2008.

But Pachauri defended his itinerary as a necessity. In an interview to a UN newsletter he said: “Unfortunately, I am guilty of a pretty large carbon footprint in terms of travel. That is something that unfortunately I can’t do anything about because I have to spread the message. I have to convince people that this is a serious problem that we have to address.”

Some colleagues stood by him despite differences. Vibha Dhawan, a senior faculty member at TERI University, recalls a sharp disagreement when she wanted to permit her faculty to take up independent consultancy assignments and share earnings 50:50 with the university.

“It is a model the IITs and other institutions follow,” Dhawan recalled. “But he was against the idea. He argued that if we didn’t allow people in TERI to do it, we couldn’t allow it in the university. It was his point of view.”

Such differences notwithstanding, colleagues recalled him treating employees like members of his family, even encouraging them to bring their children to work on Saturdays.

The bond that he had built with some of his colleagues’ children survived the allegations of sexual harassment against him.

In February 2016, a year into those charges, Dhawan recalled, her daughter had to choose between a second Masters degree or a PhD, both in a top US university. “She was a bit confused – then, she said: I know who to ask for advice: Patchy uncle.”

Pachauri was cremated on Friday. He is survived by his wife, a daughter and a son.