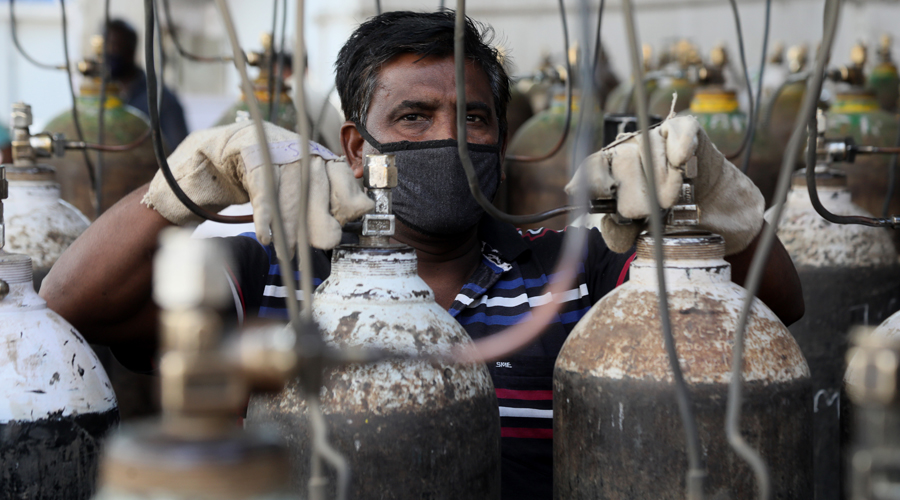 Union Health Minister Mansukh Mandaviya on Wednesday questioned Delhi's government's claim of not having received any letter from the Centre inquiring about deaths due to oxygen shortage during the second Covid-19 wave and tweeted the communication sent by his ministry on July 26 in this regard.

Sharing a snapshot of the mail sent to the Delhi government on Twitter and addressing Deputy Chief Minister Manish Sisodia, Mandaviya said it is not too late and he can send the data by August 13 so that the health ministry can reply to Parliament on the issue.

"Here is the copy of the mail sent by my ministry to the Delhi government on 26th July. It's not too late yet! By August 13 you can send the data so that we can answer the question in Parliament. After reviewing with your officers, please send the necessary data as soon as possible," Mandaviya tweeted.

Sisodia had on Tuesday alleged that the city government had not received any letter from the Centre inquiring about deaths due to oxygen shortage during the second Covid-19 wave.

The Delhi minister, however, said they have decided to share all the details with the central government.

"I read in newspaper reports that the Centre is saying that it has asked state governments to share the number of oxygen-related deaths.

"The Delhi government has not received any letter on oxygen-related deaths. When you (Centre) have not written any letter, how can you say that states are not informing you? We had formed an inquiry committee but you did not allow it (probe) to happen through the Delhi LG," he had said.

The central government at a press briefing on Tuesday said only one state has till now reported "suspected" deaths due to oxygen shortage during the second wave of Covid-19 after the Centre sought the data from them on such fatalities following the raising of the issue in Parliament.

"When the question was raised in Parliament, states were specifically asked this question and as per reports received only one state mentioned suspected death and no state has so far said that there were deaths because of oxygen shortage," Joint Secretary in the Union Health Ministry Lav Agarwal had said while replying to a query.

Last month, opposition parties had hit out at the government for informing the Parliament that no deaths due to oxygen shortage have been specifically reported by states and Union Territories during the second Covid-19 wave.

The Centre recently had sought from states and Union Territories data on deaths in connection with oxygen shortage during the second of Covid-19 earlier this year and the information was to be collated and presented in Parliament before the Monsoon session ends, official sources had said.

According to the sources, 13 states and UTs including Arunachal Pradesh, Assam, Odisha, Uttarakhand, Jammu and Kashmir, Ladakh, Jharkhand, Himachal Pradesh and Punjab have responded to the query by Tuesday.

They said only Punjab has reported four "suspected" deaths due to oxygen shortage.