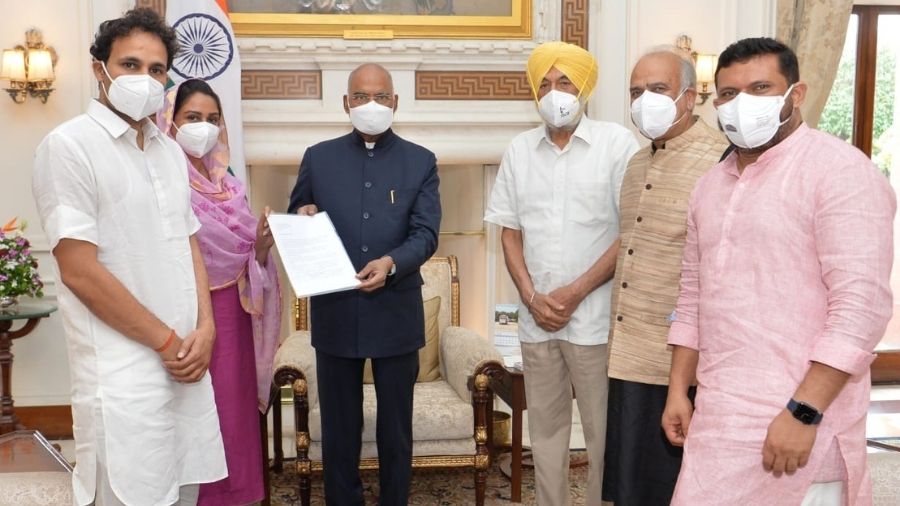 Some Opposition parties, led by the Shiromani Akali Dal (SAD), met President Ram Nath Kovind on Saturday to seek his intervention in asking the government to set up a JPC on farmer deaths and allow a discussion in Parliament on the farmers' issue and the Pegasus snooping controversy.

Leaders of SAD, NCP and JKNC met the president and handed over a letter signed by the representatives of various parties for his intervention.

The Congress, however, was not a signatory to it.

The letter by various parties, including SAD, Shiv Sena, NCP, BSP, JKNC, RLP, CPI and CPI(M), seeks the president's intervention to ensure the formation of a Joint Parliamentary Committee (JPC) to ascertain the details of farmer deaths during their agitation against three agriculture laws of the Centre and allow a discussion on their issues in Parliament.

After meeting the president, SAD leader Harsimrat Kaur Badal said the entire Opposition is demanding from the government for the last two weeks to allow them to speak in Parliament on issues concerning people.

Badal said she herself had approached the Congress and the TMC and wanted these parties to accompany them during the meeting with the president, "but unfortunately, it is before you that no one has reached here. We had sought time from the president".

All opposition parties are giving adjournment motions in Parliament on the farmers' issue and the Pegasus snooping row, she said, alleging that it is the government's duty to enable Parliament to function, but it is stonewalling the Opposition.

"We have come here to tell the president that democracy and democratic traditions are under threat and the voice of parliamentarians is being crushed inside Parliament too. This is a big loss to democracy.

"We have appealed to the president, who is the custodian and conscience keeper of the country, to put pressure on the government and admit the people's issues raised by the opposition parties and allow Parliament to function," the former Union minister told reporters.

She said they may belong to small political parties, but represent people from across the country, from Jammu and Kashmir to Lakshadweep.

"We have urged the president to put pressure on the government to let Parliament function smoothly so that people's issues are addressed," the Akali leader said.

She said farmers are sitting on the roads for the last one year and at Delhi's borders for eight months, and 500 of them have lost their lives.

But when the agriculture minister says no farmer has died during the agitation against the three farm laws, it adds to their anger, Badal said.

"The government says this is an issue concerning only one state, but MPs have come here from different states, from every nook and corner of the country," she added.

"The snooping issue is also an issue of national security. Why is the government not agreeing for a discussion on these issues and running away?

"We have also appealed to the president to form a Joint Select Committee comprising MPs from both the Lok Sabha and the Rajya Sabha to work out a solution for the protesting farmers. How many more farmers does the government want dead? Five hundred farmers have already died during the agitation," Badal said.

The Opposition leaders have demanded that tributes be paid in Parliament to the farmers who have died during the agitation.

"We hope that the president would surely tell the government to allow Parliament to function and let public money not be wasted. At least, listen to the families of those farmers who have died," Badal said.

Masoodi said, "We have also urged the president to restore statehood to Jammu and Kashmir."

Badal said they had urged the Lok Sabha speaker on Friday to form a JPC to find out how many farmers have died during the agitation.

"We have now urged the president to form the JPC. We want that the government should not run away from Parliament as it has a responsibility," she added.

Every party wants a discussion but the government does not, she alleged.

"Simply allow a discussion on both these issues and the House will start functioning and everything will settle down," the SAD leader said.

On the absence of the Congress and the TMC from their meeting with Kovind, she said till the time the Opposition is not united, the ruling Bharatiya Janata Party (BJP) will continue to benefit.