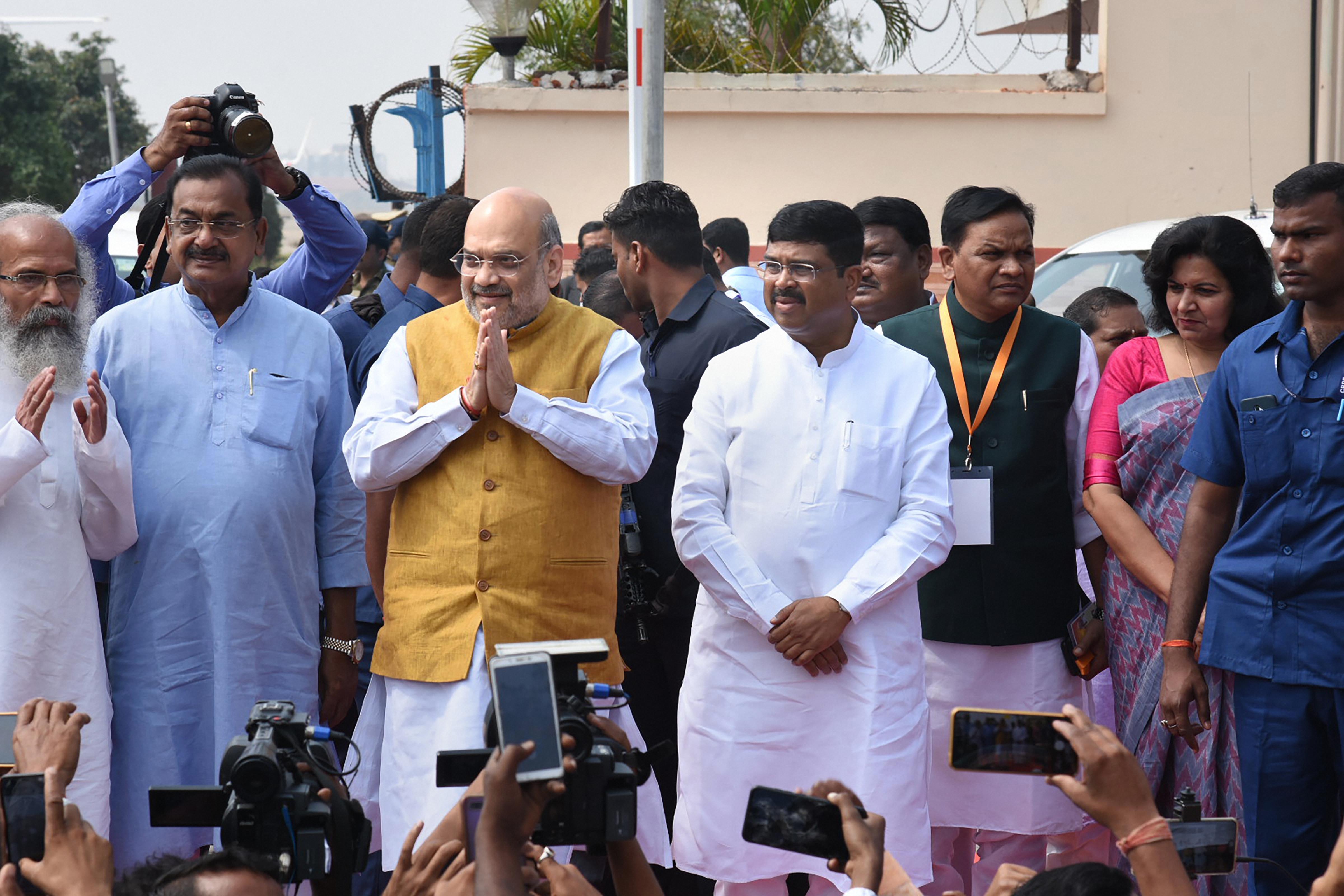 Union home minister Amit Shah is greeted by party workers at airport ahead of his of meeting of the Eastern Zonal Council (EZC) followed by a rally in support of the amended citizenship law, in Bhubaneswar, Friday, February 28, 2020
PTI
PTI   |   Bhubaneswar   |   Published 28.02.20, 12:53 PM

Union home minister Amit Shah on Friday accused Opposition parties of inciting communal riots over the CAA by spreading 'misinformation' that Muslims will lose their citizenship because of the new law.

He also extolled Prime Minister Narendra Modi for addressing important issues relating to 'national security and sensibilities,' including abrogation of provisions of Article 370, CAA and the Ram Janmabhoomi-Babri Masjid dispute.

'Opposition parties are spreading misinformation that Muslims will lose their Indian citizenship because of the CAA. They are instigating people and fomenting riots,' he told a pro-CAA BJP rally in Bhubaneswar.

'I have said this before and repeating it now that nobody, no Indian Muslim will lose their citizenship because of the CAA. This law is for granting citizenship to religious minorities that have been persecuted in Pakistan, Afghanistan and Bangladesh. It's not intended to take away anyone's citizenship'.

Calling the Citizenship (Amendment) Act a 'historic step', Shah alleged that the Congress, Communists, SP, BSP and 'Mamata didi' were spreading lies about it.

Asking people not to be misled over the Opposition's attempts at creating bhranti (confusion) about the new law, he said the Modi government had only fulfilled the dreams of leaders like Mahatma Gandhi, Sardar Patel, Maulana Azad and others who favoured Indian citizenship for persecuted minorities from the three countries.

'Shouldn't they get Indian citizenship? Shouldn't their human rights be protected?' Shah asked the audience which responded with a resounding 'yes'.

He said people should come out and ask those fomenting trouble to explain which clause of the Citizensip (Amendment) Act talked about snatching citizenship.

'Because of Article 370 Jammu and Kashmir appeared alienated from 'Bharat'. With its abrogation, Kashmir is now the crown of Mother India,' he said.

The home minister also accused the Congress of stalling resolution of Ram Janmabhoomi-Babri Masjid dispute in the Supreme Court for decades.

'After the BJP returned to power for a second term with 303 seats, the path was paved for building a grand Ram temple in Ayodhya that would touch the sky,' he said.

Shah thanked the people of Odisha for their support to the BJP, which replaced Congress as the main Opposition party in the state in the Assembly elections.

Talking about the rise of the BJP in the eastern state, the home minister said the party reaped a rich electoral harvest even in the Lok Sabha polls with eight of its candidates emerging victorious.

The Union minister said funds allocated to Odisha under 'Sonia-Manmohan' government stood at little over 79,000 crore in accordance with the recommendations of the 13th Finance Commission.

Between 2014-19, when the BJP was in power, the allocation went up to a staggering 2.11 lakh crore under the 14th Finance Commission, he said.

'The Modi government opened the door to development of not only Odisha but the entire eastern region,' he asserted.