Advertisement
Home / India / One of Cuban Five: soldier, spy and now a politician

One of Cuban Five: soldier, spy and now a politician

'If big business funds you, who are you going to serve after getting elected?' 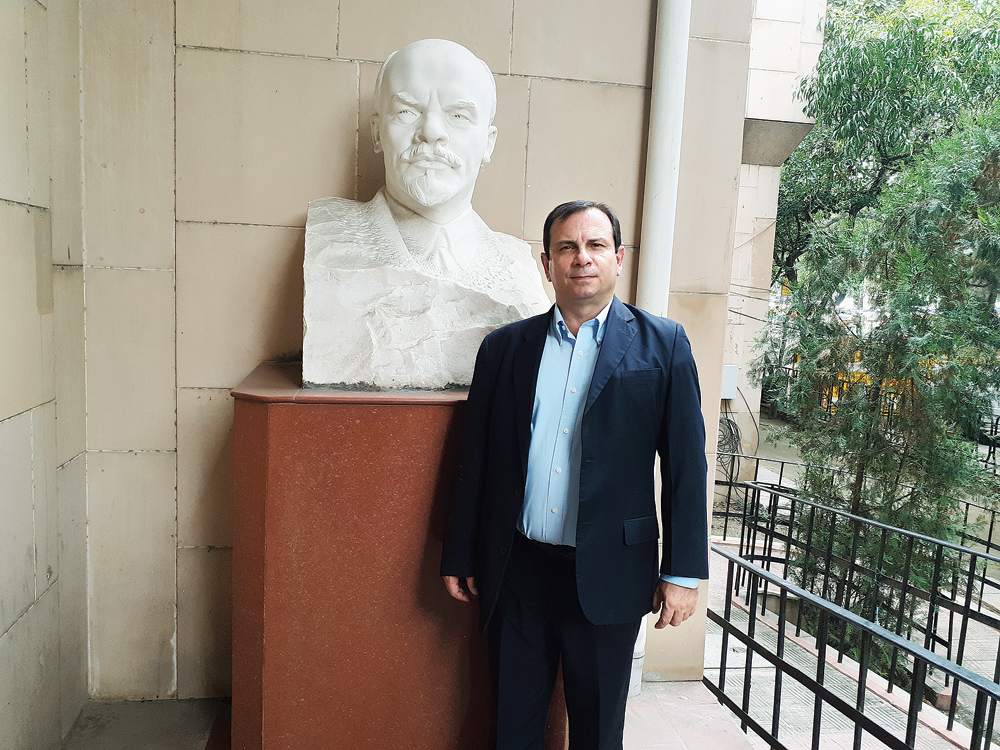 From 1998 to 2014, Left groups across the world usually greeted visiting American delegations with slogans demanding the release of the Cuban Five.

The five spies had infiltrated anti-communist militias of Cuban exiles in Florida and were arrested for espionage by the Federal Bureau of Investigation in 1998.

The last of the five was released in December 2014 in exchange for a Cuban national in jail for spying for the US. One of them, Fernando González Llort, released in February 2014, went on to become a member of Cuba’s parliament last year. He is also president of the Institute of Friendship with the Peoples (abbreviated in Spanish as ICAP) — the island nation’s international solidarity front.

Speaking to reporters here on Wednesday, González Llort, on a solidarity tour with Che Guevara’s daughter Aleida to mark 60 years of the Cuban revolution, said US President Donald Trump’s activation of Title III of the Cuban Liberty and Democratic Solidarity Act, 1996, in addition to the existing economic blockade, was “asphyxiating the Cuban economy”, especially its famed health sector.

Title III allows US citizens with claims to confiscated property in Cuba to file cases in US courts against companies working on that property. Luxury shipping firm Carnival Cruise and French alcohol major Pernod Ricard are facing litigation. Cuba fears that this will be the last straw that may drive away other firms that choose to trade with it despite credit restrictions by international banks.

“Cuba is internationally recognised for its advancements in biotech and pharma sectors. We can collaborate with India. Indian businesses can also invest in tourism and we can provide resorts and places for the increasing number of Indian tourists.… Through collaboration, Cuba has more or less achieved the basket of medicines it needs,” he added.

Fresh out of university, González Llort served as lieutenant in a tank regiment of the Cuban Revolutionary Armed Forces in Angola from 1987-89, and was decorated twice. On returning, he joined his country’s counter-terrorism efforts, moving to Miami in 1993 under the alias Rubén Campa. He spent almost 16 years in prison, including more than a year in solitary confinement.

He told The Telegraph: “In solitary confinement, I tried to distance myself from the situation, reminding myself that this is not about me, and see my situation in the historic perspective of the US’s attempts to destabilise Cuba from the very beginning. When I came home, I bought a cellphone but had no clue how to use it. I had to learn how to use a computer.

“In jail, you deal with four to five elements. When you are free, there is traffic, there is the possibility of walking free on the roads. It took time to adapt.”

He added: “I believe the people of the US are noble people… ready to help others in times of difficulty. When my family would visit me in jail, which was very limited, US citizens kept them in their homes and arranged for transport to visit the jail…. Cubans in the US are mainly there for economic reasons.”

González Llort said: “A small minority of Cubans there, who are well off and are politically connected — mostly those who left after the revolution in 1959 —have an adverse outlook towards Cuba…. Even in prison, we got along famously with other Cubans there.”

First a soldier, then a spy and now a politician-diplomat, he remains critical of US politics. “The US makes the world believe they are the best democracy. I don’t think that you should need to spend so much money at every level of a democracy from mayor to President. Who are you going to serve once elected, when you need huge amounts of money from big businesses?”

Speaking about Cuba’s new constitution that gives sanctity to private enterprise, gay rights and devolution of powers to municipalities, González Llort pointed out that the maximum age for contesting for President has been capped at 60, with a two-term limit.

Responding to expressions of disbelief from journalists, he replied: “This was highly debated.… The President needs to be physically and mentally fit.”

Fidel Castro established a one-party Republic in Cuba after overthrowing the US-backed military dictatorship of Fulgencio Batista in 1959. Castro was the longest ruling non-royal ruler of a country. He was as Prime Minister from 1959 to 1976 and then as President from 1976 to 2008, retiring at 82. He died in 2016.