Advertisement
Home / India / No clarity on end of Kashmir clampdown

No clarity on end of Kashmir clampdown 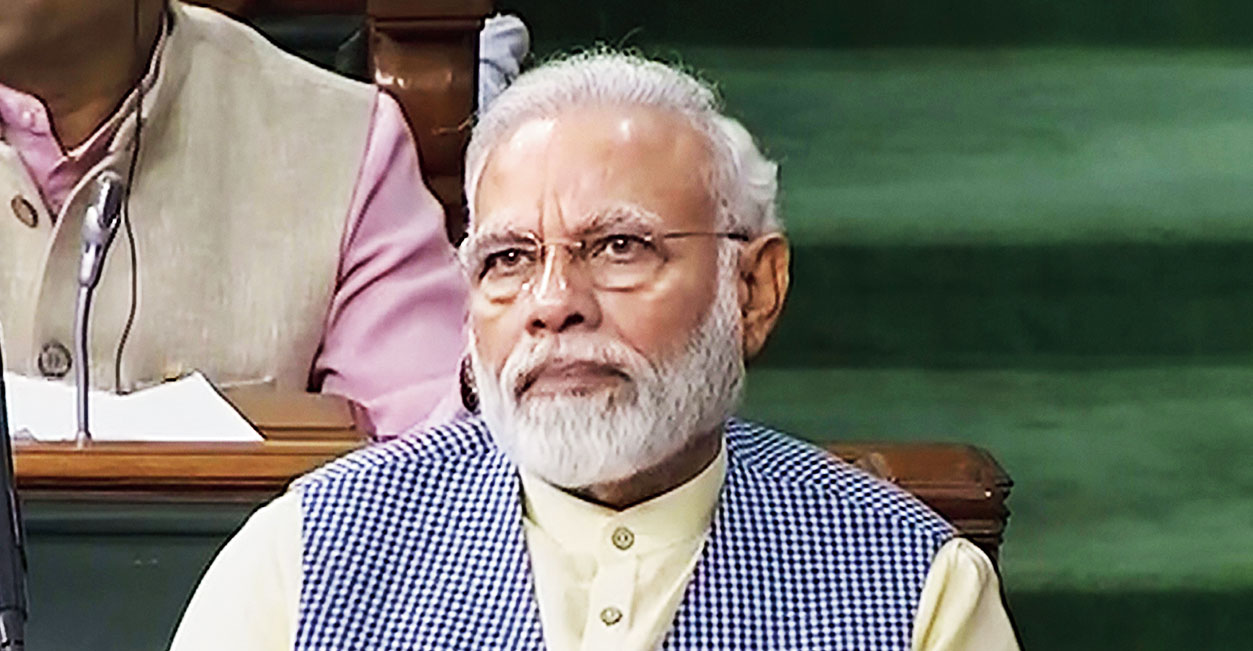 The Narendra Modi government’s one-stroke decision to take away Jammu and Kashmir’s special status and statehood received the Lok Sabha’s approval on Tuesday, as the Treasury benches used their brute majority to corner the Opposition amid loud celebratory slogans.

The government passed with two-thirds majority the statutory resolution to abrogate the provision of Article 370 that gave special status to Jammu and Kashmir and also a bill to split the state into two Union Territories.

The resolution was adopted by the Lok Sabha with 351 members voting in its favour and 72 against it, while one member abstained. The bill to create two Union Territories — Jammu and Kashmir and Ladakh — was passed by an even bigger majority of 366 votes in favour and 66 against.

The government then chose to adjourn the Lok Sabha sine die, a day before the extended session was to end, seeking not to dilute its “historic” achievement that had been at the core of its ideology for decades.

Prime Minister Modi is scheduled to address the nation on Wednesday over the Kashmir-related decisions.

The ruling side began celebrating even before the twin proposals were passed by the Lok Sabha. After the Treasury and Opposition benches sparred through the day, BJP members rose to give Modi a standing ovation when he came to the Lok Sabha late in the evening.

Loud slogans of “Bharat Mata ki jai” and “Vande Mataram” refused to stop as the Opposition, with its meagre strength in the House, seemed cornered.

The BJP members also chanted “Jahan hue balidan Mookerjee, woh Kashmir hamara hai (The place where Syama Prasad Mookerjee made his sacrifice, that Kashmir is ours)”. So loud were the slogans that they appeared to be the chants of a victorious army. 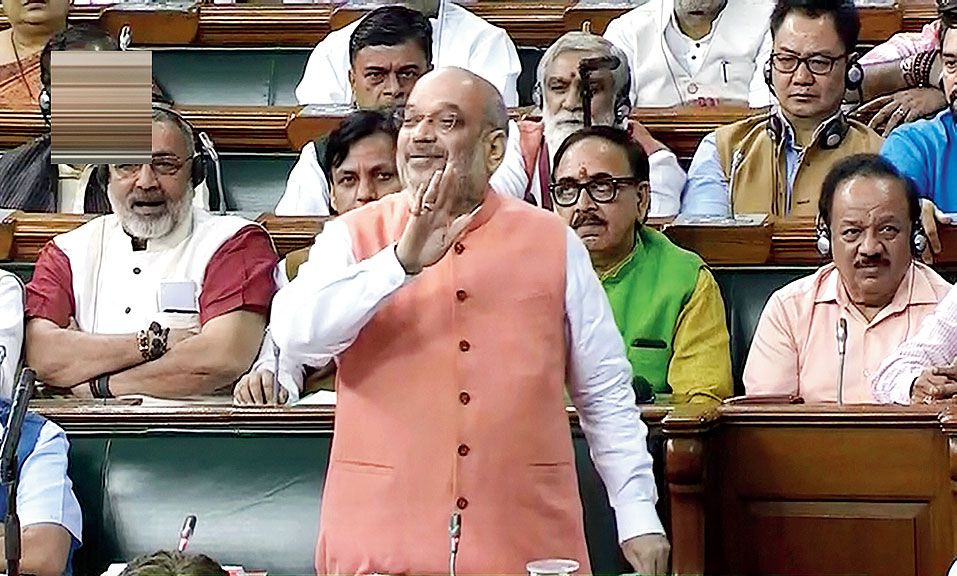 Amit Shah speaks in the Lok Sabha on Tuesday.
(PTI)

Barring the Congress, which has 52 members in the 543-member Lok Sabha, the DMK, which has 23 MPs, and the Left parties that have five, the other Opposition parties such as the Trinamul Congress and the NCP staged walkouts. As had happened in the Rajya Sabha, the unattached regional parties such as the BSP, BJD, TRS and the YSR Congress voted in favour of the proposals.

Modi stepped into the Lok Sabha when law minister Ravi Shankar Prasad was addressing the House before home minister Amit Shah took over. All the BJP members rose together to hail Modi with slogans.

When some Opposition members tried to object to the manner in which the slogans were being raised, Shah intervened. “You have a problem with slogans raised for the Prime Minister. Such slogans will be raised in every village of this country,” an angry Shah said. Slogans were raised when Shah spoke too.

Shah, who is being credited with the “bold” decisions on Jammu and Kashmir along with Modi, rubbished all the allegations levelled by the Opposition and asserted that he was not committing a “historic blunder”, but “correcting a historic blunder”.

India’s first Prime Minister, Jawaharlal Nehru, was painted as a villain of the “historic blunder” by Shah and other BJP speakers. Shah held Nehru responsible for taking the Kashmir issue to the United Nations and also for Pakistan’s control over a part of Kashmir. He accused Nehru of not allowing his home minister, Vallabhbhai Patel, to handle the accession of Jammu and Kashmir.

The Congress and some other Opposition parties tried to put up a resistance by alleging a “black day” for the country and the Constitution but the Treasury benches bore them down with their brute majority.

Congress MP Shashi Tharoor compared the Kashmir decisions with demonetisation and said this too would prove to be a “disaster”.

“We all remember the last time the Prime Minister unleashed a decision on the nation, which was also initially applauded for his decisiveness, just like today,” Tharoor said. “That was the disaster of demonetisation. The nation is still dealing with the devastating consequences of that action.”

“Black day is not today but it was then when you imposed Emergency and turned all of India into a Union Territory. So don’t preach us,” Shah replied to the Opposition’s charges.

The home minister claimed that Article 370 was a stumbling block in the integration of Jammu and Kashmir to India and that the Modi government was correcting the mistake after 70 years.

Shah justified the clampdown on Kashmir, claiming that it was only a precautionary measure to prevent mischievous people from spreading rumours and creating trouble. He justified this by accusing the Opposition of imposing curfews for longer periods, referring to the early nineties. He didn’t provide a clear answer on when the clampdown would be lifted.

On the Opposition’s allegation that the government did not hold any discussions with the people of Kashmiri and its political leaders, Shah said such gestures were meaningless as 70 years of talks hadn’t yielded anything. “Whom do we talk to? Talk to those who take inspiration from Pakistan? We don’t want to talk to them but we are ready to speak to the people of Kashmir,” he said.

Asserting that the decision to scrap Article 370 would slowly but surely be welcomed by the people of the Valley, Shah said: “In five years, the people of Kashmir will see so much development that they will realise how three families had been bluffing them for years by dangling Article 370.”

He accused the Opposition, particularly the Congress, of opposing the government’s “historic” decision only because of “vote-bank” politics.

Shah claimed that those opposing the Jammu and Kashmir reorganisation bill hadn’t provided one good reason why the provision of Article 370 that provided special status to the state should not be scrapped. “Many of these members want Article 370 to go but they can’t say so because of vote-bank politics,” he said.