Samyukta Kisan Morcha condemns govt action, which has got the agency to file cases against those supporting farmers 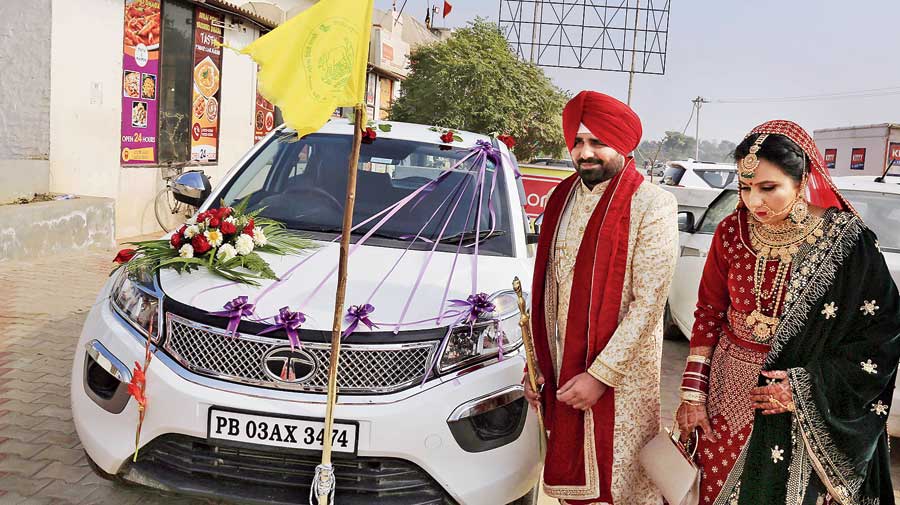 The protesting farmers on Sunday confirmed they would conduct a “kisan parade” in Delhi on Republic Day and invoked Mahatma Gandhi’s principle of peaceful protest, upset but outwardly unfazed by the government’s use of the National Investigation Agency to cut off support for them.

The Samyukta Kisan Morcha condemned the “repression” by the government, which has got the NIA to file cases against those supporting the farmers by providing buses, organising langars or paying compensation to the kin of the dead.

Darshan Pal of the Krantikari Kisan Union, a constituent of the SKM, said the farmer unions would challenge the NIA action in court.

The farmers are particularly upset that the NIA action is continuing despite the union leaders having raised the subject at their last meeting with the government on Friday.

“Agriculture minister Narendra Singh Tomar had said he would look into it, but still the harassment continues,” Pal said.

Ranjit Singh Raju of the Grameen Kisan Mazdoor Samiti, Ganganagar, said that instead of harassing people in general, the government should arrest anyone with Khalistani links.

Some of the union leaders think the government is using the NIA for a fishing expedition. They maintain that the banned separatist group Sikhs for Justice (SFJ), which has offered to pay $250,000 to anyone who hoists the Khalistani flag at India Gate, is an Indian deep-state asset.

Amid the farmers’ complaint about the mainstream media painting them in a poor light, CNNNews18 — a Reliance-controlled media house — has withdrawn a news report that named Canadian talk show host Joginder Bassi as a foreign funder of the farmers’ protest with Khalistani links. The channel had claimed the story was based on an “intelligence report”.

While the Punjabi diaspora in Canada had a hearty laugh, it became an embarrassment for the government after photographs emerged of Bassi –said to be a strong voice against Khalistan — with Prime Minister Narendra Modi.

Another photograph has surfaced showing Modi with Punjabi actor Deep Sidhu, a supporter of the farmers’ agitation.

Sidhu was an aide to actor-turned-BJP parliamentarian Sunny Deol during the last Lok Sabha elections, but Deol distanced himself from Sidhu after he backed the agitation. Sidhu has received NIA summons in a case against the SFJ.

Kakkaji likened the “repression” to what the British had done during the freedom struggle.

“In this entire movement, Gandhi is our guiding light. The British would carry out repression and lathi-charges and send people to jail but Gandhiji would still talk to them and hold no grudge. We too are dealing with this repression and accepting the suffering,” he said.

“It’s our tapasya and sadhna (penance and prayer). We are on the path of Gandhism. They should evaluate what path they are on. We have said over and over again that ‘Hamla chahe jaisa bhi ho, haath hamara nahi uthega (However the attack comes, we shall not raise our hand)’. The people of India will give them a reply.”

While the SKM has repeatedly asserted that the kisan parade would not disrupt the main Republic Day parade, farmer union leaders said the matter bore repetition keeping in mind the canards being spread by the government’s supporters.

The kisan parade will be carried out along Delhi’s Outer Ring Road, and only the national flag and the flags of the various farmer unions will be used.

Yogendra Yadav of the Jai Kisan Andolan said the farmers’ ability to carry out such a large movement peacefully was their most powerful weapon.

“No political party will be allowed to use its flag in the parade, and there will be no provocative sloganeering,” he said.

“We have no plans to lay siege to any national monument or building. We hope that Delhi and Haryana police would not create hurdles on our way.”

Asked what they might do if the Supreme Court accepted the Delhi police plea not to permit the parade, the farmer leaders said they would wait for the verdict before commenting. But they maintained their parade was on course.

“Why would the Supreme Court stop a parade of farmers under the national flag? Republic Day belongs to the people, and we are joining in that celebration,” Yadav said.

Yudhvir Singh of the Bharatiya Kisan Union said: “Our parade is not a protest but a celebration.”

With some farmers refitting their tractors to make them more powerful, union leaders have urged the protesters not to try and turn their tractors into tanks.

“We are asking all the farmers to use their usual tractors, besides having tableaux from every state highlighting not just the farm laws and farming issues but also issues like brotherhood and national integration,” a union leader said.

The protesting farmers at the Ghazipur border on Sunday.
Prem Singh
RTI blow

A Niti Aayog reply to an RTI plea has raised questions whether junior food and public distribution minister Raosaheb Danve Ministry had misled the Lok Sabha during the debate on the farm laws.

Danve had said the high-powered committee of chief ministers set up by the Prime Minister had approved the amendments to the Essential Commodities Act in keeping with a decision by the Niti Aayog’s governing council.

The Niti Aayog told transparency advocate Anjali Bhardwaj in response to an RTI request for access to the report of the committee that it had to be first placed before the governing council.

This, she said, indicates “that the farm ordinances were promulgated and introduced in Parliament without the report of the high-powered committee of chief ministers being appraised by the governing council”.