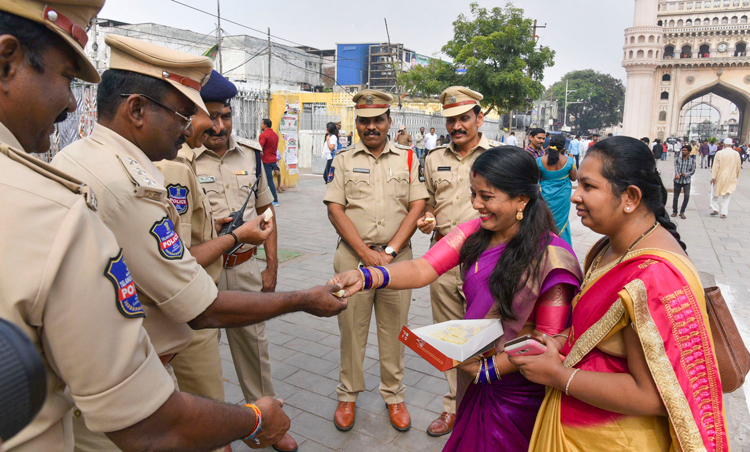 A seven-member National Human Rights Commission (NHRC) team on Saturday visited the site were the men arrested on charge of the gang-rape and murder of a veterinarian were killed in an alleged encounter, while Telangana police said that the four accused have been booked for “attacking” the cops who had accompanied them.

Amid a raging debate on the police action, the widow of one of the accused squatted on a road along with some others at her village in Narayanpet district, alleging that injustice has been done to her.

“How many are there in jail for having made mistakes...They should also be shot dead... We will not bury the bodies till then,” said Renuka, the pregnant wife of Chennakeshavulu who was killed by the police in the alleged encounter on Friday.

The NHRC team visited Chattanpalli village, about 50km from here, where the alleged encounter took place. A short distance away, the victim's charred body was found after she was allegedly gang-raped, smothered and set afire on the night of November 27. Officials said the team examined the bodies of the accused kept at a government hospital in Mahabubnagar after the post-mortem was conducted and videographed.

The apex human rights body had taken cognisance of the encounter killings, saying it was a matter of concern and needed to be investigated carefully. “Accordingly, it has asked its director-general (investigations) to immediately send a team for a fact-finding, on-the-spot investigation into the matter,” it had said.

Telangana High Court had on Friday asked the state government to preserve the bodies of the four accused till 8pm on December 9 after a representation was received in the office of the Chief Justice, requesting judicial intervention into the incident, alleging it was an extra-judicial killing.

The high court had also directed that the video of the post-mortem be handed over to the registrar-general of the high court.

Even as the NHRC started its fact-finding probe, the police said they had registered a case on Friday against the four accused in the rape-and-murder case under IPC Sections 307 (attempt to murder) and 176 (omission to give notice or information to public servant by person legally bound to give it) and relevant sections of the Indian Arms Act.

Based on a complaint filed by the officer in charge of the police team that accompanied the four accused, the FIR was registered, a officer told PTI.

The Cyberabad police had said its personnel had resorted to “retaliatory” firing after two of the accused opened fire at them by snatching their weapons besides attacking them with stones and sticks, resulting in injuries to two policemen.

The police had taken the men to the scene of crime to recover the victim’s phone. For the second day, groups of people publicly raised slogans here hailing police and chief minister K. Chandrasekhar Rao. The father of the victim said the accused, who behaved in a way worse than demons with his daughter, deserved to be punished the way police acted. He again thanked the police and the chief minister for the police action.

Congress Legislature Party (CLP) leader M. Bhatti Vikramarka led a delegation of party leaders to governor Tamilisai Soundararajan on Saturday and complained about the police allegedly not accepting the complaint from the victim’s family members when she went missing, citing jurisdiction.

“The situation in the state is such that the police don’t accept cases unless those belonging to the (ruling) TRS or its functionaries recommend it over phone,” Vikramarka alleged. He demanded that liquor sale be done only in a regulated and controlled manner and not as a source of revenue for the government. The four men, all lorry workers, aged between 20 and 26 years, were arrested on November 29. There was intense demand for speedy punishment to the rape accused after the brutal gang-rape and murder came to light.

However, political leaders and other prominent people have been speaking in different voices over the police action, with some saying that it will send a stern message to culprits, while others questioned the police claim and condemned the “extra-judicial killings”.

Many also claimed that the incident reflected the failure of the criminal justice system which is plagued by delays. Senior Congress leader Kapil Sibal on Saturday hit out at those hailing the Telangana encounter, saying the “savage Taliban-style justice” will make courts irrelevant. “To the cheerleaders of: Telangana Encounter. Blood lust vs due process. The savage Taliban-style justice vs the civilised...will make courts irrelevant,” Sibal said in a tweet. The state government has ordered setting up of a special court (fast track) to expedite the trial. Speaking at an event in Jodhpur, Union law minister Ravi Shankar Prasad urged the Chief Justice of India and other senior judges to ensure that there is a mechanism to monitor quick disposal of rape cases, saying that the women of the country are under pain and distress and crying for justice.

“I would urge the CJI and other senior judges that now there must be a mechanism to monitor the disposal of these cases so that India’s stature as a proud country governed by rule of law must be restored at the earliest,” Prasad said, and assured government funding for it.

“The women of the country are under pain and distress. They are crying for justice,” he said.

The minister said there were 704 fast-track courts for heinous offences and others and the government was in the process of setting up 1,123 dedicated courts for POCSO and rape offences.

“In the law relating to women violence, we have already laid down capital punishment and other severe punishment including completion of trial in two months,” he added.