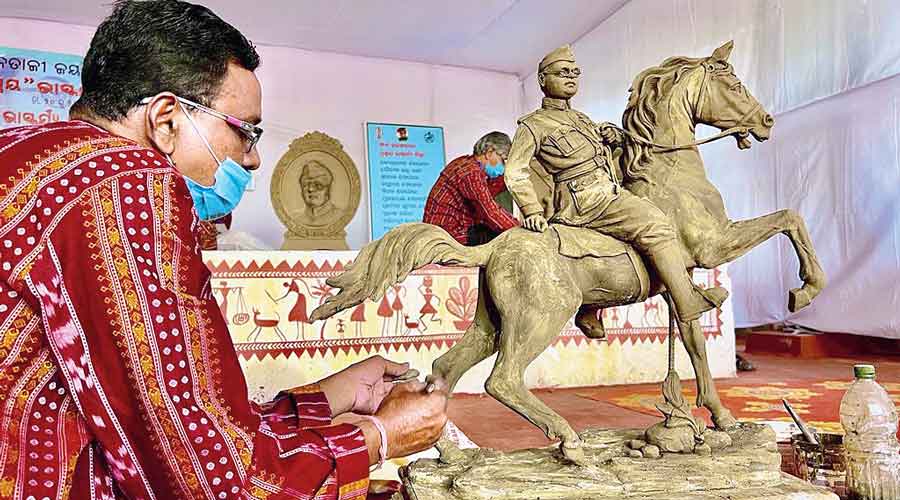 Kedar Nath Behera, an artisan from Cuttack, is unaware of Prime Minister Narendra Modi’s tweet that a hologram statue of Netaji Subhas Chandra Bose would be unveiled on January 23 on his birth anniversary at the India Gate.

But Behera is excited that the 3-feet long statue of Netaji made by him would be displayed for public viewing at his ancestral home in Cuttack on that day. Netaji was born in the city on January 23, 1897.

His ancestral home, Janakinath Bhawan at Odia Bazar in Cuttack has already been converted into a museum with 12 galleries showcasing different artefacts and goods used during Netaji’s time. The Netaji Birth Place Museum is a big tourist attraction.

The 65-year-old artisan from Cuttack and 14 others have finished 15 idols based on the life of Netaji.

“It’s about how your work is being appreciated by the public. Height does not differentiate between a bad or good idol,” Behera told The Telegraph.

He said: “All the idols are made of soil, straw, wood and in some cases, we have used some iron pieces.  All these would be put on display for the public on January 23.”

Another artisan Kailash Chandra Rana, 64, said: “If the idol is put in a glass box it would remain there for at least 50 years.  The museum authority has planned to showcase all the idols in a separate gallery in the museum.”

President, Odisha Lalit Kala Academy, Sudarshan Patnaik, the eminent sand sculptor, said: “As the nation is celebrating the 125th birth anniversary of Netaji, we decided to do something different involving the artists from Cuttack.  We had organised a camp for 15 eminent artisans of the city for three days starting from Thursday.”

Jalendra Prasad Ray, the museum in charge said: “One will be able to see rare photographs, letters that he wrote to his family members during his stay in various jails, Netaji’s INA uniform and various artefacts. The museum, a two-storey house, also contains the table and chair Netaji used and his bookshelves. A gallery also throws light on the spiritual aspect of Netaji.”