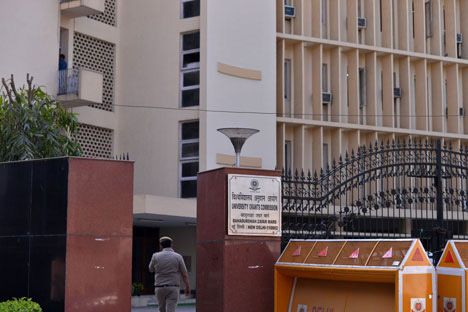 About 5 lakh candidates take the University Grants Commission-conducted NET and about 30,000 clear it, becoming eligible to teach in colleges. The JRF largely attracts the cream among them.
Prem Singh
Basant Kumar Mohanty   |   New Delhi   |   Published 28.12.18, 10:48 PM

Dalit students will now secure the special research fellowship meant for the community only if they clear the stringent hurdle of qualifying for the Junior Research Fellowship through the National Eligibility Test, the NDA government has decided.

Many students and BJP Lok Sabha member Udit Raj have criticised the move saying it would reduce research opportunities for Dalit students.

The 8,000 Junior Research Fellowships (JRFs) awarded every year already have a 15 per cent Scheduled Caste quota covering 1,200 seats, whereas the Rajiv Gandhi National Fellowship for Dalit students went to those who skipped or failed the National Eligibility Test (NET).

About 5 lakh candidates take the University Grants Commission-conducted NET and about 30,000 clear it, becoming eligible to teach in colleges. The JRF largely attracts the cream among them.

So far, to get the special fellowship, Dalit students did not need to take the NET: they only needed to pass their postgraduate exam and impress any particular university with their research proposals.

But the social justice and empowerment ministry, which funds the Dalit fellowship, notified new guidelines in October saying: “SC candidates who have qualified NET-JRF of UGC… should enrol for the course….”

“The new guidelines are unjust and a move to exclude Dalit students from higher education,” BJP parliamentarian Raj said on Friday at a news conference held by the Delhi University Teachers Association to protest the “attack on reservation in educational institutions”.

The National SC, ST, OBC Student and Youth Front, a Delhi-based group, has written to the University Grants Commission chairperson against changing the eligibility criterion for the Dalit fellowship.

“Dalit students clearing the NET-JRF are already entitled to the JRF, but now they will be covered by this special fellowship while those from outside the JRF, who received the special fellowship every year, will lose out,” said Jit Hazarika, a research scholar from the Tata Institute of Social Sciences, Mumbai.

Another student, associated with the Ambedkar Periyar Study Circle in IIT Madras, said: “This measure will deny research scholarships to downtrodden people, preventing them from studying the social processes or questioning Brahminical hegemony.”

He said most Dalit students cannot afford coaching and, left out of the JRF, were using the special fellowship to research topics on social discrimination and social disparity, among others.

On Friday, college students from across the country gathered in Delhi to form a forum, Young India, to fight the decline in central government funding for higher education, the attack on the autonomy of institutions and policies affecting social justice.