Chandran, a professional player of the traditional temple instrument thimila who regularly performs at Hindu shrines during festivals and rituals, happens to be a Dalit 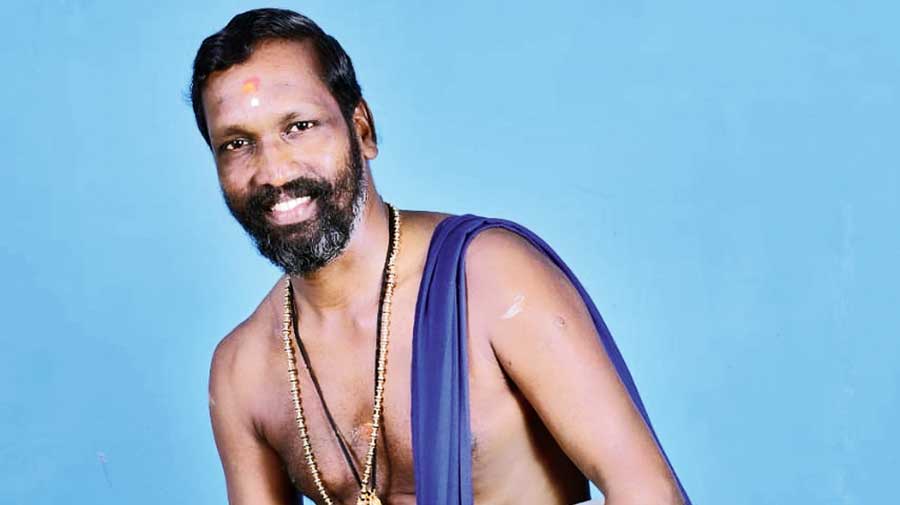 A renowned Kerala temple that refused entry to then President Giani Zail Singh and celebrated singer K.J. Yesudas because they were non-Hindus is now embroiled in controversy over its ban on musicians from outside certain approved castes from performing within its perimeter.

“Temple percussionist” Kalamandalam Chandran Peringode has castigated the famous Guruvayur Sri Krishna Temple near Kozhikode for refusing to let him perform on its premises.

Chandran, a professional player of the traditional temple instrument thimila who regularly performs at Hindu shrines during festivals and rituals, happens to be a Dalit.

The controversy comes two years after a bitter legal and political battle over the centuries-old ban on women of childbearing age at another famous Kerala temple, the hilltop Sabarimala shrine 180km south of Guruvayur.

“Only musicians from castes that come under the ‘ambalavasi’ category are allowed to perform inside the perimeter of the Guruvayur temple,” Chandran told The Telegraph on Saturday.

The designation “ambalavasi” — literally “those who reside within temples” — covers certain non-Brahmin higher castes that traditionally engage in non-priestly activities, such as playing music, at temples.

“I have performed several times at the Guruvayur temple but always outside the boundary walls. My question is, if I’m capable enough as a temple percussionist, why not allow me to play inside?” Chandran said.

Chandran had been the leader of a 301-member panchayavadyam — a percussion ensemble with five kinds of instruments — that made it to the Limca Book of Records in 2012 by playing non-stop for 3 hours and 45 minutes.

He said he had written several complaints to the temple administration “but they never even acknowledged my complaints, let alone act on them”.

The “ambalavasi” rule is not widely known, nor has it historically triggered much controversy — unlike the temple’s ban on non-Hindus or other shrines’ discriminatory practices against the lower castes or women.

While Chandran first raised the subject in 2018, he was unable to garner much support. This time he is backed by an NGO, Anadhija.

The temple, where a strategically placed signboard reads “No entry for non-Hindus”, has often attracted controversy.

In the 1980s, it had denied permission for a visit by President Zail Singh because he was not a Hindu. Yesudas, a Christian, was refused entry multiple times despite several of his devotional songs to Krishna having been embraced without reserve by temples and devotees.

In January 2008, the temple had conducted a “purification” after a Briton entered its premises. The priests went ahead with the ritual despite the visitor producing a certificate that said he had converted to Hinduism at the Arya Samaj in Thiruvananthapuram.

The priests argued that they accepted conversion certificates only from the Arya Samaj in neighbouring Kozhikode.

During the “temple entry agitation” by lower caste Hindus in the early 1930s, devotees had thrashed communist leader P. Krishna Pillai and left him bleeding from the head for daring to ring the Guruvayur temple’s bell — a preserve of Brahmins.

K.B. Mohandas, chairperson of the temple’s government-appointed management panel — the Guruvayur Devaswom Board — denied receiving any complaints from Chandran.

“Ideally, he should have come to us with his complaint rather than go to the media,” Mohandas, a lawyer, said.

He claimed ignorance about any caste discrimination against musicians at the temple.

“I’m not certain about such a practice. But I need to point out how the high priests are always Namboothiri Brahmins from a few families,” he said, apparently playing down Chandran’s complaint.

“I’m not for creating any friction between caste groups. But I assure them that the administration will allow individual rights as enshrined in the Constitution.”

Anadhija president V.A. Krishnan said the group was “planning to go to court as this is a denial of a citizen’s constitutional right”.

He said his group’s research showed that there was no scriptural basis to the ban imposed by the temple, but added that such discrimination was rampant in the state.