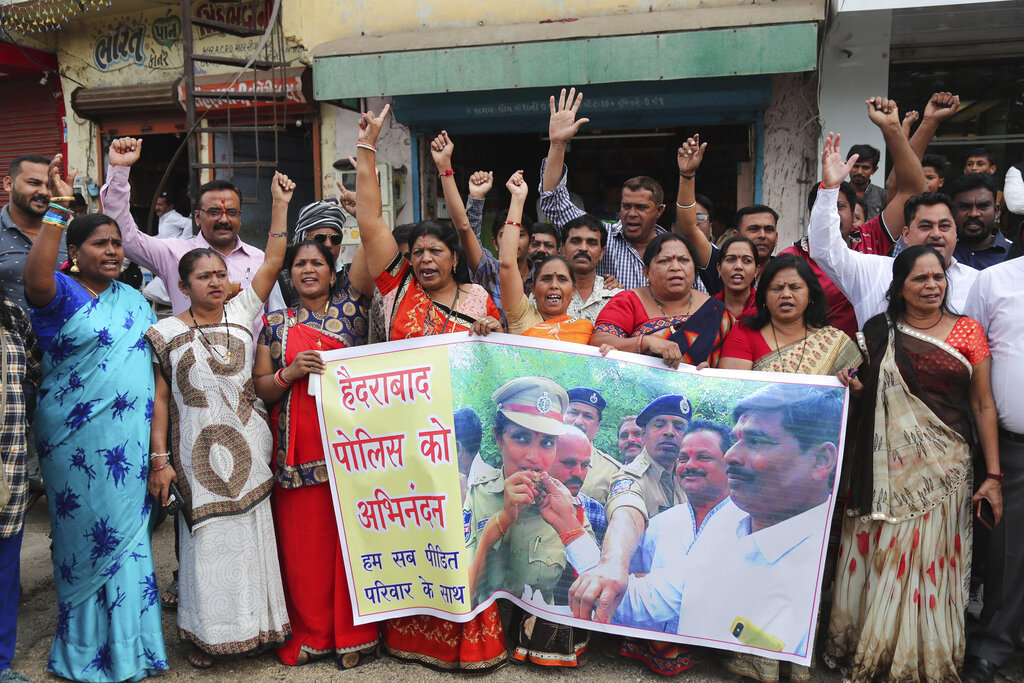 Indians shout slogans in favor of police to celebrate killing of four men suspected of raping and killing a woman in Shadnagar in southern state of Telangana, in Ahmadabad, on Friday, Dec. 6, 2019.
AP
Pheroze L. Vincent   |   New Delhi   |   Published 06.12.19, 09:00 PM

Kumar, a Congress leader and a senior advocate of the Supreme Court, spoke up on a day several politicians, including his party colleagues, celebrated the alleged encounter deaths. Kumar was law minister when the definition of rape was expanded legally after the 2012 Delhi gang-rape and murder. The following are excepts from a conversation with Kumar:

“Despite the legitimate outrage against the brutal rape and killing of the Telangana veterinary doctor, today’s killings give rise to disturbing concerns regarding not only the state of lawlessness in the country, but also about the alleged extra-judicial killings in custody, of which the National Human Rights Commission has taken note.

“The alleged encounter killings in Telangana question the premises of a Constitutional State, as far as Telangana is concerned. Can we afford the tag of a lawless State is the larger question.

“Coming as the killings do in the wake of repeated cases of torture and custodial deaths, difficult but necessary questions about the abuse of power by the armed constabulary of the State cannot be brushed aside any longer. Consistent with the libertarian and dignitarian conscience of the republic, we need to put in place foolproof mechanisms to ensure that the exercise of power by the guardians of people’s liberties is tamed by constitutional discipline.

“In the context of the pervasive climate of fear that has gripped the nation, the central government needs to remind itself that we are a constitutional democracy and cannot pretend to be a muscular state which owes no apology to constitutional constraints.

“In the new India promised to us by the BJP regime, fear seems to prevail over freedom and, muscularity over constitutionality. A nation which values freedom above all else cannot and must not countenance the arrogance and abuse of State power in any form and for any reason whatsoever.

“The unprecedented number of cases against political adversaries smack of political persecution rather than lawful prosecution. The detention of individuals, who are political opponents, for long periods without trial is a case of delayed justice leading to denial of justice. The higher judiciary as the custodian of individual liberties has at times failed to live up to its role as sentinel on the qui vive (lookout) in defence of freedom and individual liberty.

“The Telangana killings have invited spontaneous criticism because of what appears prima facie to be a response to populist demands for swift justice. The qualitative distinction of our constitutional democracy lies in the fact that we have eschewed the lamppost of lynch mob justice in favour of a fair and just due process in bringing criminals to justice.

Ashwani Kumar added: “The happenings in Telangana put a question mark on this fundamental constitutional premise. That’s why the NHRC has taken suo motu notice of the killings.

“It is true that there have been cases of extra-judicial killings in the past as well, but at some point of time the nation as a whole must stand up to vindicate national conscience.

“As far as the demand for stringent criminal law is concerned, we have very stringent criminal laws aimed at retributive justice for heinous crimes. However, experience has shown that stringent laws unjustly and unfairly applied and criminal trials conducted under public pressure have not yielded justice. This aspect was emphasised when amendments to criminal law were made in the aftermath of the Nirbhaya tragedy, when I was law minister.

“I believe political parties, in order to ensure their credibility, must rise above the exigencies of electoral politics and unite to work as a bulwark against the brazen abuse of power and encroachment of fundamental freedoms of citizens. The defence of democracy and the Constitution is the single most important imperative around which the Opposition must unite despite a fractured polity.

“The cry for freedom is an ‘unending frenzy’ in our country. We must remember that the Congress under its most popular leader, Shrimati Indira Gandhi, had to face defeat after the Emergency. Freedom and human dignity are integral to each other. Indians cannot suffer the loss of freedom in silence.

“We must assert ourselves collectively to defend our core values.”