Centre not lending anybody even a single paisa from the state exchequer: Professor Ratan Khasnabis 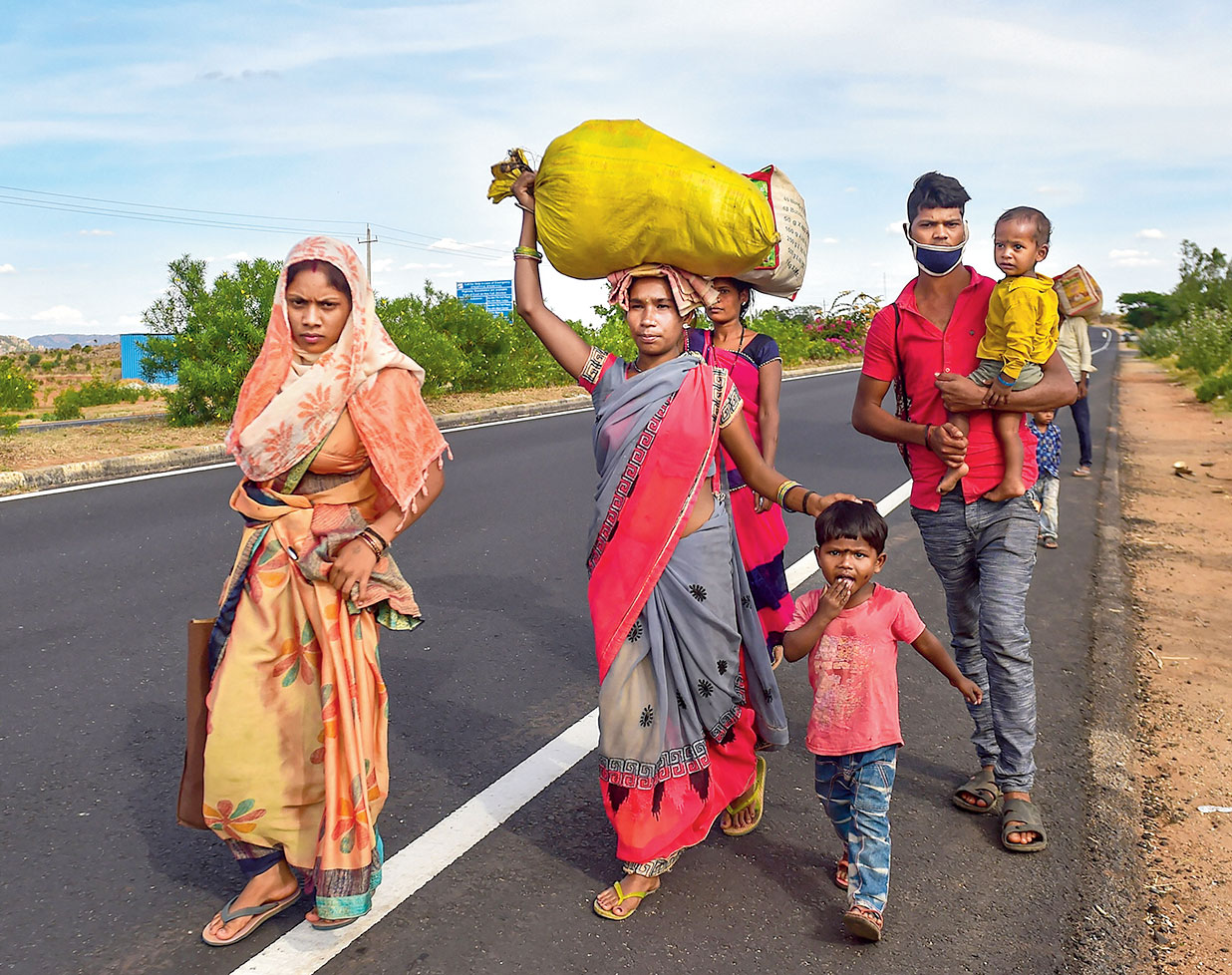 A migrant family from Chhattisgarh walks on the national highway at Devanahalli near Bangalore on May 15 as they make their way back home during the lockdown.
(PTI)
Subhoranjan Dasgupta   |   Published 14.06.20, 10:20 PM

The impact of the coronavirus on the economy is best captured in the faces and figures of the penniless and exhausted stragglers walking hundreds of miles to reach their homes. Ratan Khasnabis, professor of economics, analyses the overall impact in this dialogue with Subhoranjan Dasgupta, professor of human science.

Q: Let us begin with the sharp and acerbic controversy that has greeted the Rs 20-lakh-crore package. Do you find it worthwhile or do you think that the Narendra Modi government has taken the country for a ride? Rahul Gandhi has already admonished the government for behaving like a moneylender.…

Khasnabis: I think Rahul Gandhi failed to comprehend the real implication of the Modi package. Even the worst moneylender, when he advances money, depends on monetary resources under his control for this purpose. The Modi government is not lending anybody even a single paisa from the state exchequer.

It is forcing the commercial banks and the RBI to infuse liquidity in the monetary system without caring for the prudential norms which are in vogue in the banking business. One may add that the central government is doing this primarily for serving big business.

The RBI reserve for Targeted Long-term Repo Operations of the order of 2.5 lakh crores has already been diverted to the corporate bond market at a low (repo) rate of interest, and big players have been given the opportunity to access this cheap capital in order to substitute for past high-cost debts.… The asset reconstruction companies which badly needed these funds for restructuring their stressed assets are the worst sufferers.

Q: The Indian economy was already in the doldrums even before the coronavirus struck. Now, the World Bank has given a grim picture. Could you enumerate the negative impact of the pandemic on the Indian economy?

Khasnabis: Disastrous and devastating. The extent of the damage caused by the lockdown, according to the SBI research group, is “humongous”. It estimated that the total loss to states due to Covid-19 is Rs 30.03 lakh crore. The Covid-induced lockdown is mostly an urban phenomenon; productive activities were stopped in red and orange zones. Ninety per cent of losses were in the urban segments of these zones.

In aggregate demand, the impact of the Covid-induced lockdown was mostly borne by private consumption demand, which declined severely due to job losses.

According to CMIE (the Centre for Monitoring Indian Economy), more than 12 crore jobs were lost due to the lockdown. The consumption loss should therefore be at least 1/3 of the average consumption, which is about 60 per cent of the GDP.

Investment, which is about 30 per cent of the GDP, should be near-zero during the lockdown as fresh investment will largely be discouraged during this period.

Other things, including government spending, remaining the same (there is a big question mark here because the government revenue will decline and the government might decide to cut expenses due to its fiscal conservatism), the economy is bound to contract severely.

Q: Nobel laureate Abhijit Vinayak Banerjee has recommended the printing of currency notes and distributing them among the poorest. He has said “we can think of inflation later”. Do you find this prescription reasonable?

Khasnabis: I do not understand why such a hue and cry is being raised against Prof. Banerjee’s prescription to print money. Printing money against new government bonds would widen the monetary base (bank reserve maintained as liability of the RBI + paper currency) of the economy and this is exactly what is needed in a demand-constrained situation. It will inject fresh demand in the economy and thereby deflation will be arrested.

Inflation is no issue when demand is crashing. So also with respect to current account balance and India’s sovereign rating. These are not important issues now. Prof. Banerjee’s proposal that this money should go to the bottom 60 per cent of Indians also sounds logical.

Q: On the contrary, China has leapt up again. The lockdown in Wuhan was lifted quite some time ago and it is busy exporting masks and PPE (personal protection equipment). The giant joint ventures in Shanghai are buzzing with activity. To what extent is China affected or will it be at all affected?

Khasnabis: Surprisingly, China could contain Covid-19 within a few weeks. More surprising is the fact that, unlike what happened in the US, big cities in China, such as Beijing, Shanghai or Canton, remained largely unaffected. This is because China could successfully utilise their experience during the SARS pandemic and placed Wuhan, the place where Covid-19 was first recorded, under complete lockdown for 10 weeks.

The lockdown was successful because the Chinese Communist Party could mobilise the people to fight this pandemic. In fact, the success story of Vietnam, Cuba or even that of Kerala is largely explained by the power of mobilising the people against the pandemic.

The damage to the Chinese economy will be less due to Covid-19 inside China but more due to Covid-19 outside China, particularly in its export zones including Europe and the US. The Chinese leaders have hinted that they would take care of this export loss by developing the internal market further, as they did during the 2008 global crisis. In fact, there are indications that China would emerge as the No. 1 global power in the near future.

The US has understood it, which is why it has given a call to form a ring and block around China in the eastern Pacific region.

Q: One does not fail to mark the strong tinge of irony in this context. Wuhan is considered the birthplace of the coronavirus and now China appears as a redeemer supplying masks, medicines, ingredients and PPE….

Khasnabis: The Communist Party secretary of Wuhan was removed because he had failed to comprehend the real import of Covid-19 at its early stage. This points out how serious the CPC leadership is with respect to Covid-19. Compare this with the way the US administration is handling this pandemic and you will understand why Wuhan is now supplying corona kits to the US and other countries of the world.

Q: After noting the ravage in some countries like the US and Britain, could we claim that countries which have a stable and steady public healthcare network have fared better? Examples: Germany, Canada, Australia. Does this also imply that private healthcare sponsored by globalisation is not the panacea?

Khasnabis: It goes without saying that the countries which have a stable and steady healthcare network have fared better. It had to be so because it did not adhere to the neoliberal logic that health care should also be treated in terms of private cost and private return.

Q: Years after when we shall recollect this catastrophe, which image or picture will haunt our minds?

Khasnabis: The answer to your question is very simple. We shall recall the terrible sight of migrant labourers struggling their way on foot, with children and family, to their home. Without food, without water, without shelter.