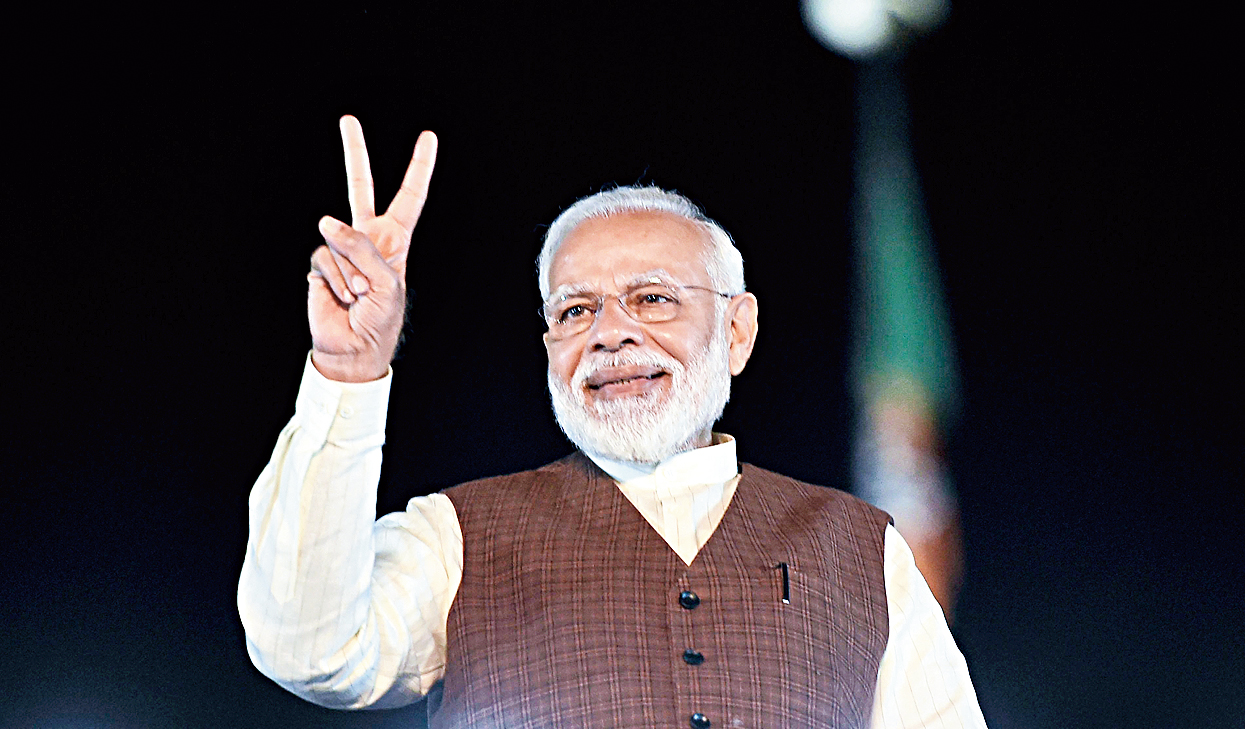 Prime Minister Narendra Modi on Friday hailed a “historic turnout of 98%” in the Block Development Council elections held a day earlier in Jammu and Kashmir, describing it as “news that would make every Indian proud”.

He tied it to the August 5 scrapping of Jammu and Kashmir’s special status.

“It would make India’s Parliament proud that due to their historic decision in August this year, the people of J&K have been able to exercise their democratic right with exceptional enthusiasm, as seen in the historic turnout of 98% that too without violence or disturbance,” the Prime Minister tweeted.

Yet the polls he was referring to were not a direct election but an indirect one, where the voters are themselves elected representatives — like the Rajya Sabha or Presidential elections where participation tends to be close to 100 per cent.

The councils are the second tier of the panchayati raj system, equivalent to panchayat samitis in states like Bengal.

On Thursday, their chairpersons were elected by the directly elected representatives of the lowest tier — the panches and sarpanches from the panchayats — an electorate of 26,029 of which some 98.3 per cent voted.

However, when the panchayats were elected in a direct vote last December, the Valley recorded a 41.3 per cent turnout and the state 74 per cent overall. Some 65 per cent of the halqas or clusters of villages in the Kashmir valley either had only a single candidate or remained vacant because none contested.

Thursday’s electorate of 26,029 was therefore smaller than what it would have been had all the panchayats been contested and filled.

The Prime Minister’s tweet suggests that he is celebrating as “historic” the turnout of those who were voted in before the “historic decision in August this year” when the special status was withdrawn and a clampdown imposed.

“News that would make every Indian proud! For the first time since 1947, Block Development Council elections were held in Jammu, Kashmir, Leh and Ladakh on the 24th. The polls witnessed a historic turnout of 98%. There were over 1080 candidates in the fray in 310 blocks,” Modi tweeted.

Jammu and Kashmir has 316 blocks, of which two could not conduct voting because none of the panchayats under them had a single representative, reflecting the large-scale panchayat vote boycott in the Valley in December.

In four councils whose chairpersons’ posts are reserved for women, none contested.

In three other councils, all the nominations were rejected. So, 307 council chairpersons were elected in all.

In 27 of these councils, there was just a single candidate, and hence there was no contest. Of these, 24 were from the Kashmir valley. The turnout was taken to be 100 per cent in these 27 councils while calculating the figure of 98.3 per cent, sources said.

Most national and state parties — including the Congress, National Conference, People’s Democratic Party, CPM and others --- boycotted the council polls, except for the Congress contesting and winning a single seat in Pulwama. The panches and sarpanches loyal to the national parties, however, seem to have voted.

The BJP won 81 posts but claimed that many of the 217 successful Independents were its proxy candidates who did not use the party symbol fearing a backlash. The Congress won in Pulwama while the Panthers Party won the remaining 8.

Panchayat bodies, which tend to be flush with funds, are closely contested in most states and even witness clashes. However, the National Conference and the People’s Democratic Party had boycotted the December panchayat polls in Jammu and Kashmir.

Union minister of state Jitendra Singh, who is from Jammu and is posted in the Prime Minister’s Office, had earlier this month questioned the mandate of politicians elected from the Valley.

“You are there in Parliament and the J&K Assembly by winning elections through 10 per cent voter turnout, and you talk of jamhooriyat (democracy)?” he had said in a lecture at JNU.