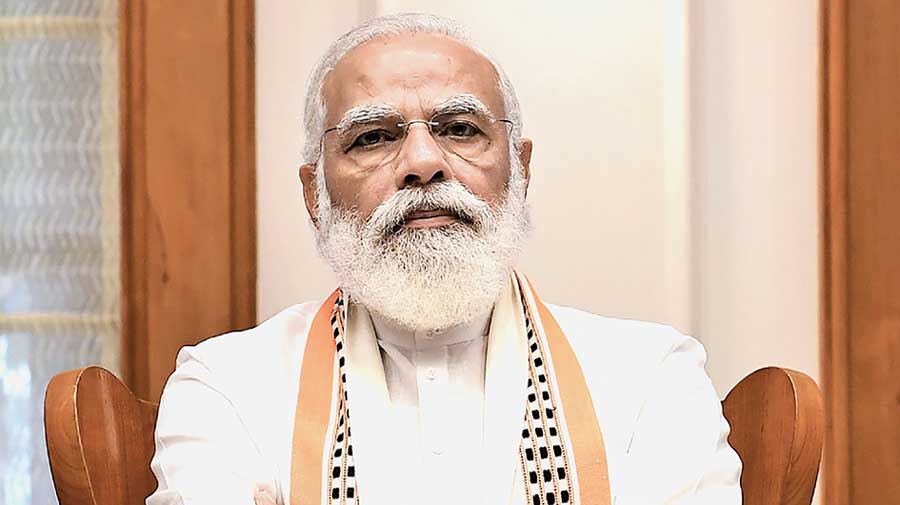 No one can fault Prime Minister Narendra Modi for his choice of metaphors and sense of timing.

When the economy has gone to the dogs and the government is in the doghouse over Covid-19 and the China border crisis, Modi used the better part of his monthly Mann ki Baat radio address on Sunday to champion the cause of rearing swadeshi dog breeds that have “astounding beauty and quality”.

The avowed objective was the dogged pursuit of Atmanirbhar Bharat (self-reliant India), under which no “domain” should be left “untouched” by its “influence”.

The Rajapalayam breed
Sourced by The Telegraph

“Friends, I have also been told that Indian breed dogs are also very good and capable. Among the Indian breeds, Mudhol Hound and Himachali Hound are of excellent pedigree. Rajapalayam, Kanni, Chippiparai and Kombai are fabulous Indian breeds. They cost less to raise and are better adapted to the Indian environment and surroundings,” Modi said, according to the English translation of Mann ki Baat.

Modi’s affection for man’s best friend is well documented. In 2013, asked whether he regretted the Gujarat violence of 2002 (over 1,000 people were killed in riots), Modi, then Gujarat chief minister, had told the Reuters news agency: “Someone else is driving a car and we’re sitting behind, even then if a puppy comes under the wheel, will it be painful or not? Of course it is. If I’m a chief minister or not, I’m a human being. If something bad happens anywhere, it is natural to be sad.”

In Sunday’s Mann ki Baat, the Prime Minister could not stop talking about dogs. “Now, our security agencies are also inducting these Indian breed dogs as part of their security squad. In the recent past, Mudhol Hound dogs have been trained and inducted in the dog squad of the army, CISF and NSG; Kombai dogs have been included by the CRPF. Research on the Indian breed dogs is also being done by the Indian Council of Agriculture Research with the aim to make them better and more beneficial,” Modi said.

The Prime Minister urged people to “search for these breeds on the Internet and know more about them”.

“The beauty and qualities of these breeds will leave you astounded! The next time you think of raising a pet dog, consider bringing home one of these Indian breeds. At a time when Atmanirbhar Bharat is becoming a mantra of the people, how can any domain be left untouched by its influence?” the Prime Minister said.

Modi also spoke at length about the toy industry and urged people to be “vocal about local toys”. He said India had the potential to become a toy hub and called upon start-ups to take up the challenge of converting the country into one.

The Prime Minister brought up the issue of toys while highlighting the plight of children, who have been forced to stay indoors because of the pandemic.

Modi called upon start-ups to “team up for toys”, saying the country had the potential to become the toy hub of the world.

The Prime Minister did refer to Covid-19, lauding people for showing “discipline” and “responsibility” while celebrating festivals during the pandemic. At the end of the address, he urged people to remain vigilant by wearing masks and maintaining physical distancing.

Narendra Modi’s Mann Ki Baat video uploaded by the BJP’s official YouTube channel has been greeted with 1.80 lakh dislikes and 17,000 likes till 1.15am on Monday.

Such an overwhelming negative response to an official social media upload of the Prime Minister is rare.

Some believe this could be a fallout of the Centre’s decision to go ahead with the JEE-NEET exams amid the pandemic.