Modi and Shah step back, RSS steps in 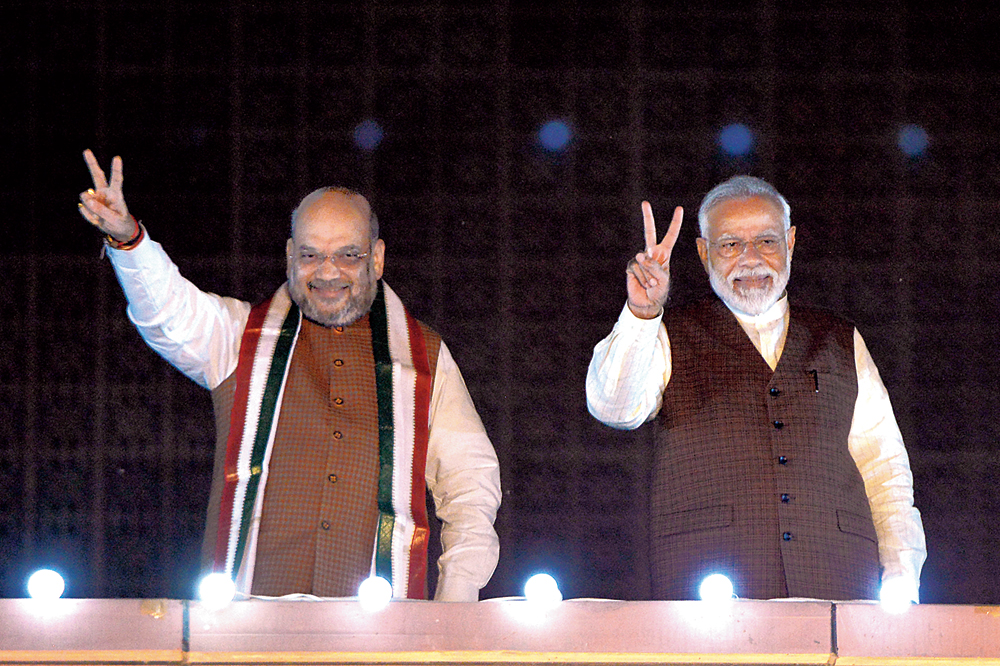 Amit Shah with Narendra Modi at the BJP headquarters in New Delhi after the announcement of Maharashtra and Haryana poll results on October 24
Picture by Prem Singh
J.P. Yadav   |   New Delhi   |   Published 07.11.19, 09:10 PM

Prime Minister Narendra Modi and his master strategist Amit Shah appear to have withdrawn themselves from the Maharashtra standoff, prompting the Rashtriya Swayamsevak Sangh to try and play deal-maker in the country’s second-largest state.

While Delhi’s political circles are yet to fathom why Modi and party chief Shah have stepped back, the BJP’s ideological parent appears to have stepped in to avoid a split in the wider Hindutva family.

The Shiv Sena has been the BJP’s oldest ally but now fears being politically devoured by the junior turned senior partner.

“Unlike Haryana, Amit Shah seems to have left it to the state unit in Maharashtra to talk to the Shiv Sena. It’s perplexing,” a BJP leader in Delhi said.

Shah had worked out a deal with JJP leader Dushyant Chautala in Haryana, offering him the post of deputy chief minister, but he was not willing to accept the bullying attitude of the Sena leadership, the BJP leader claimed.

Other party leaders, however, hinted at a deeper political complexity behind the Union home minister’s confounding silence on the Maharashtra tangle. It is in this backdrop that the RSS appears to have stepped in.

The political importance of the RSS has been widely known, despite its claims of being apolitical, but the Maharashtra crisis has unwittingly fore-grounded its role.

Fadnavis’s rush to Nagpur came after he had met Shah and Nitin Gadkari, the Nagpur MP and Union minister for road transport and highways, in Delhi a day earlier on Monday.

The meetings were seen as a desperate move to seek the help of the two leaders in clinching a deal with the Sena to form the government in Maharashtra.

Fadnavis’s meeting with the RSS chief also came in the backdrop of a letter that Sena leader Kishore Tiwary, who had quit the BJP ahead of last month’s Assembly polls, wrote to Bhagwat urging him to intervene in ending the stalemate by deploying Gadkari.

Gadkari will resolve the crisis in two hours, Tiwary wrote in the letter.

Finally on Thursday, a day before the current session of the Maharashtra Assembly expires, Gadkari dashed to Nagpur, his hometown, and held a meeting with Bhagwat, although he denied that the RSS had any role to play in ending the face-off between the allies, who together have enough seats to form the government but are bickering on sharing the chief minister’s post.

“RSS chief Mohan Bhagwat or the Sangh have no relation to all this (jockeying over government formation). It would be inappropriate to link the RSS chief. The stalemate would be resolved by the BJP,” Gadkari said in reply to a question.

Gadkari’s claim was hardly convincing given the developments over the past few days that clearly showed the RSS chief was engaged in negotiating a truce.

The chief of the RSS is revered by the wider Sangh parivar, so BJP managers feel that if Bhagwat intervenes and speaks to Sena boss Uddhav Thackeray, the crisis can be resolved.

So far, the RSS chief too doesn’t seem to have succeeded in getting the Sena to relent. “If Mohan Bhagwatji can get us the chief minister’s post, then we will listen to him,” Sena leader Sanjay Raut told The Telegraph on Wednesday.