The Supreme Court on Tuesday said the mere possibility that the Aadhaar law might be misused could not be a ground for striking it down. 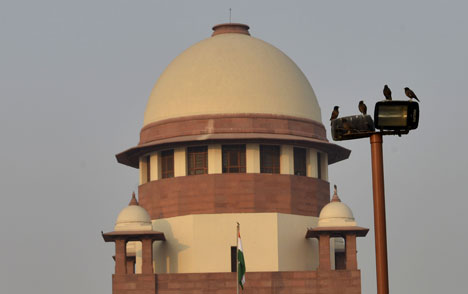 New Delhi: The Supreme Court on Tuesday said the mere possibility that the Aadhaar law might be misused could not be a ground for striking it down.

It had to be proved first that the provision seriously violated a citizen's fundamental rights and was "a colourable legislation" open to abuse, the court said, as arguments for and against the law continued before a five-judge constitution bench.

"There is a long line of judgments of this court that the mere possibility of misuse of a law will not lead to striking down of a legislation, unless you are able to demonstrate that the Aadhaar law is a colourable legislation," Justice D.Y. Chandrachud, one of the judges on the bench, told senior advocate Kapil Sibal.

"The power of misuse is no ground to declare a law unconstitutional. You must understand that striking down a law is a problem for us," the judge added.

Sibal was appearing for a batch of petitioners who had challenged the BJP-led NDA government's decision to make Aadhaar enrolment mandatory for people and a condition for accessing various government services and welfare schemes.

The veteran lawyer said the biometric identifier programme - being aggressively promoted by the government - had "serious consequences for this country, as it would affect future generations".

"This is a great moment in the history of the Supreme Court, which will decide a matter of far-reaching consequences. If your Lordships uphold the law, then, for every child born, Aadhaar will become mandatory and will be used even after the child becomes an adult," Sibal told the bench that also included Chief Justice Dipak Misra and Justices A.K. Sikri, A.M. Khanwilkar and Ashok Bhushan.

The court, Sibal pleaded, must look at the Aadhaar law with a different perspective despite the earlier judgments on possible misuse.

The court pointed out that Section 7 of the Aadhaar Act listed the purposes it could be used for.

Sibal said Section 57 mentioned "other services", which would mean unspecified services too.

Although the state, the senior counsel argued, might not itself misuse personal data, such details were prone to misuse by private players.

"Once the data is available in the public domain, it can be misused by private players. Once you make the data public, it can't be retrieved... it is such a serious issue which will affect future generations," Sibal contended.

"Information is power and if the power is given to the state, it will use it as never before. There is no safe technology in the world (to prevent its misuse). Aadhaar is nothing but right to information for the state," Sibal said.

"Neither the court nor experts know what will happen to digital technology in the future. Aadhaar can't identify whether a person is a terrorist or money launderer, unless you have information of the crime," the lawyer added.

The arguments would continue on Wednesday.