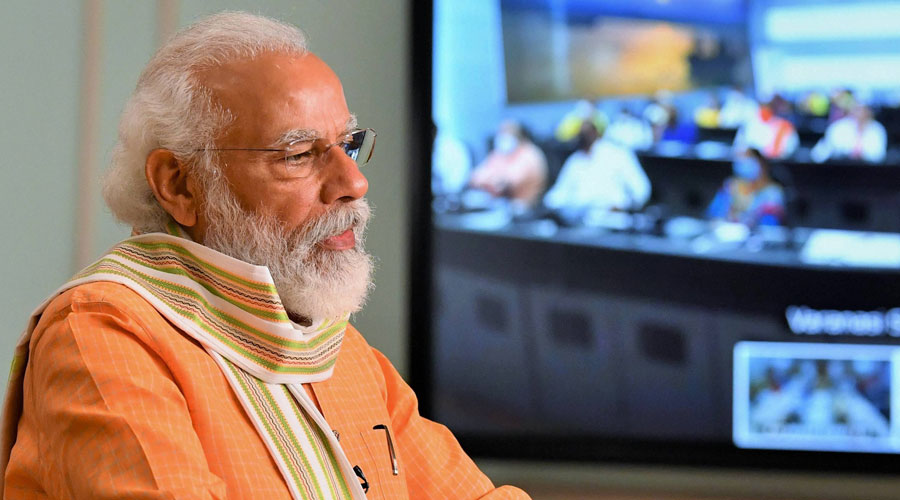 Over 140 milita­ry veterans have written to Prime Minister Narendra Modi and President Ram Na­th Kovind seeking answ­ers on the Chinese “incursion” and blaming the June 15 Galwan Valley clash th­at killed 20 Indian soldiers on “failure at one or more le­v­els in the political, civil and military establishments”.

The letter alludes obliquely to Modi’s June 19 statement that no one had entered Indian territory or was occupying any Indian post, which Beijing had cited gleefully to reaffirm its claim on the Galwan Valley.

While the PMO had a day la­ter issued a clarification saying Modi had referred to the post-clash situation, this too was repeatedly challenged by retired officers who cited sate­l­l­ite pictures and local reports to assert continued Chinese en­­croachment even after June 15.

It urges the political leadership and the President — the supreme commander of the ar­med forces — to constitute a fa­ct-finding committee on the Chinese “intrusions, incursio­ns and encroachments” in La­dakh and Arunachal Pradesh. It has asked that the report is tabled in Parliament within a “time-bound framework”.

Written by the former na­vy chief, Admiral L. Ramdas, and endorsed by 143 veterans, the letter is addressed also to defence minister Rajnath Sin­gh, Chief of Defence Staff Bipin Rawat and the tri-services chiefs.

The letter comes at a time India and China have taken baby steps towards disengagement, with sources in the ar­my and the security establishment expressing concern that the exercise is forcing India to “retreat” from its own territory.

While China is said to have pulled back 1.5km from the Galwan Valley flashpoint, so has India. The creation of this “buffer zone” inside India’s claimed line means that an area Indian soldiers had been patrolling since 1962 has become out of bounds for them.

The army too is looking at the disengagement process with caution since the situation is still tense on the Line of Actual Control where both countries have amassed troo­ps, weaponry and equipment.

The veterans’ letter says: “The incident at Galwan could only have happened because of failure at one or more levels in the political, civil and military establishments, especially in continuous intelligence acquisition and dissemination.

The letter said: “While we accept that failures can happen in any system, in the current instance, either our intelligence system was found wanting, or the intelligence which it obtained did not reach the field units in time. We, therefore, urge that our nation’s intelligence system be urgently revamped.”

The letter has demanded greater clarity from the authorities on the border situation.

“A formal statement issued by the army or by the government soon after the unfortunate Galwan incident of 15/16 June would have laid rumours and guesses to rest. It would have prevented China from taking advantage of contradictions between ambiguous or inaccurate verbal statements needing later clarifications,” it says.

“We, therefore, urge that in the event of such future situations, only formal statements be issued so that the Indian public is not confused and the aggressor nation does not gain political advantage.”

The veterans have underscored the “secular credentials” of India’s armed forces and advised the “political leadership” to adhere to the constitutional values and prefer “discussion” to “coercion and force” in tackling “domestic disputes”.

“We believe that only this secular basis will more firmly integrate our diverse nation, and strongly urge that divisions on the basis of religion, caste or creed should be discouraged as a matter of policy,” the letter says.

“We urge our political leadership to adhere unwaveringly to the vision and spirit of the Constitution of India, which spells out the framework for our nation and its people.

“We further urge that in the domestic context, proactive steps be taken to use non-electoral political tools of consultation, discussion and negotiation in all domestic disputes and situations instead of coercion and force, as it will strengthen our nation’s integrity and resolve to face any and all aggressive designs by inimical and aggressive neighbours.”

The letter asks the government to try and conclude boundary agreements with all India’s neighbours, especially China and Pakistan, using all diplomatic means.

The letter highlights that the signatories are all armed forces veterans who have served the country in war and peace.

“We do not represent any group or political party, and each of us only has the best interest of our country and our armed forces at heart in making this statement. We, therefore, request that our respectful comments, requests and urgings be taken in that spirit alone,” it says.

Earlier, in the middle of last year’s Lok Sabha elections, over 150 veterans led by Admiral Ramdas had written to the President protesting the invocation of the armed forces for political purposes.

They had rued the efforts by political leaders to take “credit for military operations like cross-border strikes, and even going so far as to claim the armed forces to be ‘Modi ji ki sena’”.