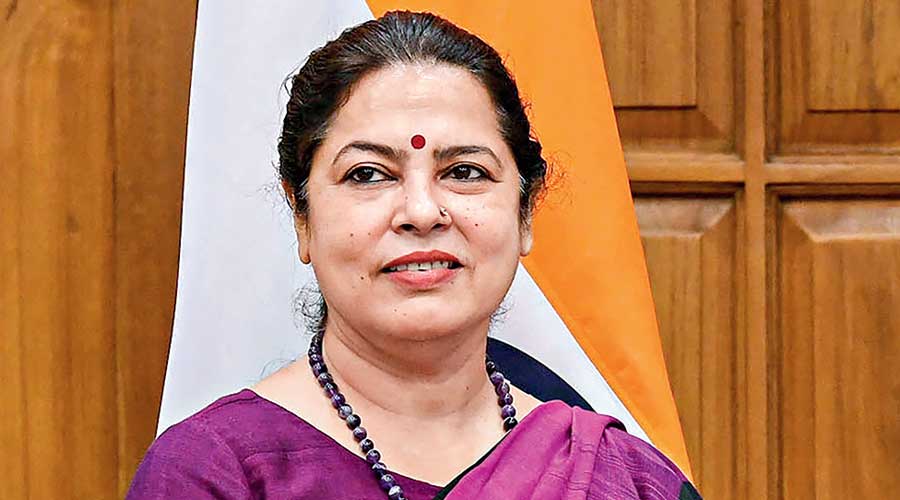 Union minister Meenakshi Lekhi has kicked up a storm by suggesting that Kashmiri Pandits were to blame for their failure to return to the Valley, comparing their situation to migrant labourers who have returned to their places of work after having gone home during the first wave of pandemic.

The return and rehabilitation of Kashmiri Pandits has always been high on the ruling BJP’s agenda and the party has often forcefully censured its rival Congress for failing to ensure their return. Most Kashmiri Pandits are said to be supporters of the BJP.

Lekhi, who recently took charge as minister of state for external affairs and culture, however, has ruffled feathers by comparing the issue of Pandits to that of migrant labourers and saying the community has to share the blame for their failure to return.

The minister, during an online interaction with Kashmiri Pandits, was asked by a speaker when they would be rehabilitated in Kashmir to “save their culture”.

“I am really surprised at the question because as a person who is part of this country, you are free to move wherever you want to move. Nobody is stopping people from going back to their homes, and whatever else is needed will be provided,” the minister replied.

Lekhi then compared their plight with migrant labourers who had to return to their home states after the coronavirus pandemic broke out in 2020 but were back at their workplaces when the situation improved.

“When corona happened in Delhi, a lot of migrant workers had come from Bihar, Jharkhand and wherever. They were here and whatever was the treatment meted out to them by Delhi government, they all went back and they have all come back. Where is the problem? I think people also take a call where they wish to be,” she said, suggesting Pandits were not taking the initiative.

Interrupting her, a Pandit participant asked whether it was possible for them to return to the Valley.

“That is why I am surprised at the question because so far as the government is concerned, it continues to be with the people of India whether in Kashmir, Bihar or Delhi or wherever. Some initiative needs to come from people themselves also,” the minister said.

Lekhi then said many Pandits were not interested at all in returning to the Valley.

“I know there are lots of people who are settled across (the country) and they are settled well. So on one side, their heart may be pining for their original place of habitation but they are very happy with wherever they are living also. They do not want to be disturbed… People need to take some private initiative as well,” she said.

The remarks left the Pandit participants fuming, with one asking her to clarify whether the migrant labourers’ issue was comparable to their migration.

BJP sources said Lekhi’s remarks betrays frustration within a section of its leadership that Pandits were not showing a “spine” to return while the situation was “conducive” for their return. It would appear as a blow to the BJP if it fails to facilitate the return of Pandits after two consecutive terms in power.

The remarks triggered outrage among a section of Pandits.

“This is a tight slap from the core member of @BJP4India @M_Lekhi on the face of Modi Bhakts from Kashmiri Pandit community. Hope now the KP’s who called this politician their God hang their heads in shame & apologise to everyone. Thanks a lot for being blunt about your policy,” tweeted Mohit Bhan, a Kashmiri Pandit and a spokesman of the People’s Democratic Party.

This is a tight slap from the core member of @BJP4India @M_Lekhi on the face of Modi Bhakts from Kashmiri Pandit community. Hope now the KP's who called this politician their God hang their heads in shame & apologise to everyone. Thanks a lot for being blunt about your policy. pic.twitter.com/z955jPjHSG

Senior BJP leader Ashwani Chrungoo, also a Pandit, hit out at Lekhi’s remarks and said he would call her and ask her to withdraw the comments.

“It is an unbecoming statement in the sense that Government of India is already conscious of its responsibilities and a lot of things are being done and are under process,” Chrungoo told The Telegraph.

“It is a statement that cannot be taken so seriously. It has come from a person of a junior rank. It cannot be called a statement from the government.”

The BJP leader said the situation in the Valley is not conducive for the return of Pandits as “there is neither peace nor normalcy in Kashmir”.

The BJP central leadership had claimed that Article 370 was a hurdle in restoring peace.