March in Valley against ‘mouthpiece’ tactics

The journalists worry that they are continuously monitored at the centre 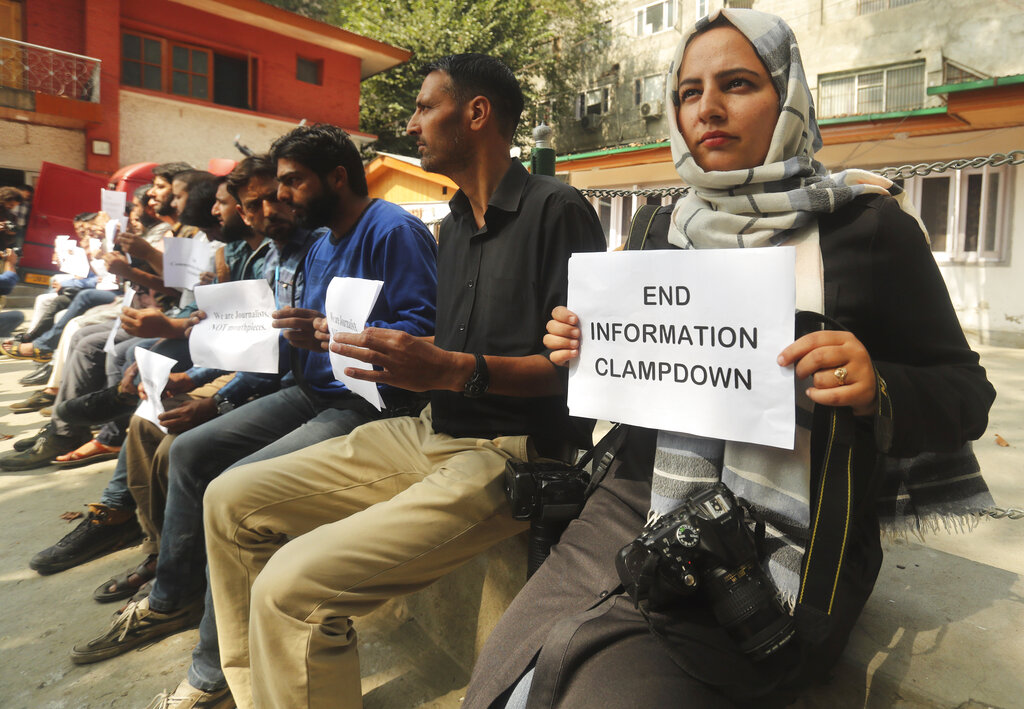 Journalists held a silent protest in Srinagar on Thursday, the 60th day of the lockdown in the Valley, staging a sit-in at the Kashmir Press Club and later marching towards the Press Enclave, a few hundred metres away in the city centre, where many newspapers have their offices.

In a joint statement, the journalists said the government aimed to reduce them to its “mouthpieces” by blocking their access to information and forcing them to rely on official releases and occasional press briefings that have been “one-way communication”.

Internet and mobile phone connections have been snapped in the Valley since August 5, and to file their reports journalists have to queue at a “media facilitation centre”, set up in Srinagar several days after the communication blockade was imposed.

“While limiting the access of media to a hall hired at a private hotel designated as media facilitation centre — where the government has set up nine computers and a cellphone connection for over 400 journalists — the government has attempted to prevent the information (going out of the Valley),” the statement said.

The journalists worry that they are continuously monitored at the centre.

“There’s no privacy…. We are under surveillance,” Reuters quoted Ishfaq Tantray, general secretary of the Kashmir Press Club, as saying.

The protest, the first that the government has not cracked down on since August 5, was backed by around a dozen organisations of journalists, including the press club.

The correspondent for the Chandigarh-based daily The Tribune, Majid Jahangir, said the past two months had been harrowing for journalists.

“In my 20 years in journalism, I have never seen such restrictions placed on journalists. There are restrictions on our movement. The officials at government departments and hospitals are reluctant to talk to us and our mobiles and Internet are not working,” Jahangir said.

The government has treated with disdain the pleas by journalists’ bodies to restore connectivity.

The president of the Kashmir Press Club, Shuja Thakur, told Reuters the organisation had several times approached the government for restoration of mobile and Internet services for journalists.

“They keep promising and say they are looking into it, but so far there has been no action,” Reuters quoted him as saying.

The joint statement said: “By limiting the access and continuing with the communication gag the government aims to reduce the journalists to its mouthpieces.”

When some journalists later marched from the press club, on Poloview Road, towards the Press Enclave, the policemen present did not stop them, appearing to have been taken by surprise as they had expected the protest to be confined to the club premises.

A member of the press club said a police officer had come in the morning to enquire what the protest was all about.

“We told him we were staging a sit-in within the club premises. Minutes ahead of the protest, a police team led by a sub-inspector entered the club but did not intervene,” he said.