Around 1,500 tractors from villages falling under Kandela khap have set out for the rally 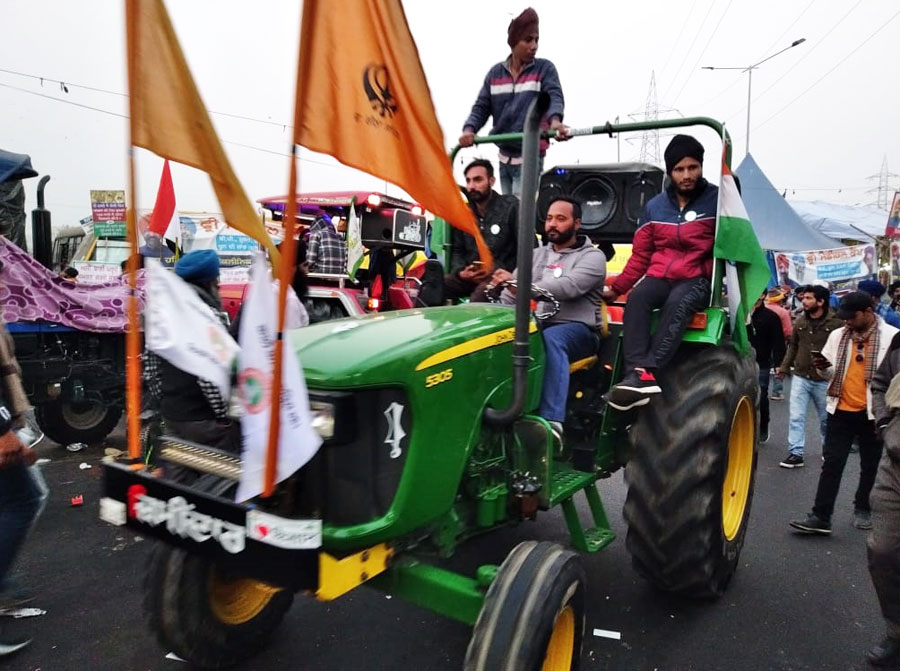 Farmer unions protesting the Centre’s farm laws will go ahead with the tractor parade in Delhi on Tuesday
File Picture
Our Bureau And Agencies   |   Chandigarh   |   Published 24.01.21, 08:56 PM

Several khap panchayats have decided to join the proposed farmers’ Republic Day tractor parade in Delhi. Over thousands of tractors have been spotted leaving various caste councils’ villages for the national capital on Sunday.

About 1,500 tractors from villages under the Kandela khap set out on Sunday for the ‘tractor parade’ in Delhi, Khap head Tekram Kandela informed.

“We have started from Jind. We will be proceeding in a peaceful and orderly manner and follow the route allotted by the authorities for the parade,” Kandela said.

The Kandela khap, which had spearheaded a farmers’ agitation in Haryana nearly two decades ago, has lent its support to farmers against the new farm laws.

It’s not just Kandela, several other khaps’ too have extended their support for the farmers’ agitation against the new farm laws.

Tekram Kandela maintained that his Kandela khap had recently adopted four resolutions at a khap panchayat for repealing the three farm laws, giving a legal guarantee of crop MSP, waiving the farm loans and implementing the Swaminathan Commission recommendations.

Independent MLA from Dadri in Haryana, Sombir Sangwan, who also heads the Sangwan khap said thousands of farmers in their tractors were starting for various border points of Delhi to take part in the ‘tractor parade’.

Sangwan said about 200 ‘khaps’ from Haryana and elsewhere have lent their support to make the ‘tractor parade’ a success.

“Several khaps are taking part in the tractor parade. They are actively involved and farmers have their full support,” he said.

Sangwan, who recently withdrew his support from the Khattar government over farmers’ issue, said, “The Centre should repeal the laws and agree to the farmers demands.”

Apart from Punjab, thousands of farmers from Haryana on Sunday set out in their tractor-trolleys and other vehicles to take part in the proposed tractor parade.

In addition to the flag of their farmers’ union, many tractors were sporting large-size national flags too.

A few villages in Jind, Kurukshetra and some other districts have said farmers of their villages would cover any loss caused by damage to tractors while they participate in the ‘tractor parade’.

Thousands of tractors were seen on Haryana’s highways on Sunday as a large number of farmers from Punjab are also on their way to Delhi's border points to take part in the tractor rally.

A 71-year-old Ludhiana resident, Mahender Singh, also known as ‘marathon man’, was seen on Saturday marching on the Patiala-Jind national highway on his way to Tikri border protest site.

“I am a common man, but I thought if we don’t raise our voice today, then coming generations will curse us. We have to put pressure on the government to repeal the farm laws,” Singh told reporters, while on the march with a ‘Kisan Ekta Zindabad’ poster.

I have told my family that I will return only after these laws are repealed, said Singh.

With various groups of farmers taking breaks at various places on way to Delhi, volunteers served tea and eatables to them.

Serving tea to farmers since Sunday morning, a volunteer in Bahadurgarh said thousands of farmers with tractors were reaching for the tractor parade.

Many farmers’ leaders said the proposed tractor parade would be massive.

There would be few lakh tractors in this parade, but I cannot give any estimate as still so many are starting from their villages, he said.

The farmer unions protesting the Centre’s farm laws had said they would go ahead with their tractor parade in Delhi on the Republic Day.

Earlier, at many places in Punjab and Haryana, tractor marches were taken out to mobilise more people for the tractor parade.

Thousands of farmers from Punjab and Haryana have been camping at Delhi's borders for several weeks, demanding the repeal of the farm laws and a legal guarantee on the minimum support price for crops.