Advertisement
Home / India / Leg lost to bomb 20 years ago, Asna back as healer

Leg lost to bomb 20 years ago, Asna back as healer 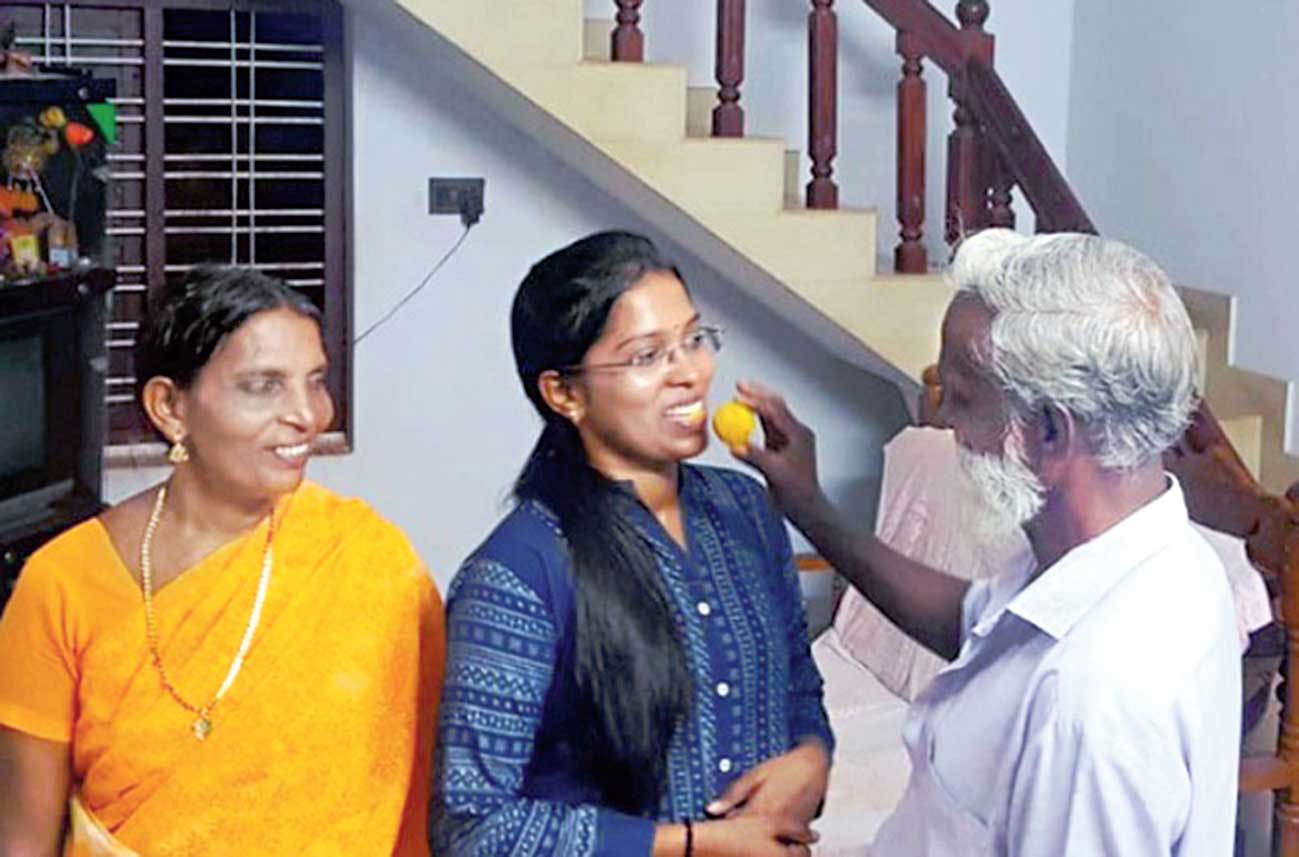 Dr K. Asna, 25, has only vague memories of that life-changing evening when she lost a leg in a bomb attack by a group of RSS-BJP workers targeting her uncle who was a Congress activist.

The five-year-old girl was playing with her brother Appu, then aged 3, in the courtyard of her uncle’s home at Cheruvanchery in the deep interiors of Kannur district on September 27, 2000, when the local body election was underway in Kerala and the BJP-RSS workers in the village decided to use the occasion to settle some old scores with Congress activists.

An altercation occurred between BJP-RSS activists and Congress workers at a polling booth nearby and the kids saw friends of their uncle running into their compound for safety.

Sensing trouble, Asna’s mother rushed out to protect her children. But it was a bit late. Asna still remembers the deafening blast that caused her excruciating pain. She lost her right leg in the crude bomb blast. Appu lost a huge chunk of flesh on his feet. Shards of glass pierced the stomach of their mother. That was the time when Asna had just got enrolled into Class I at the Government Lower Primary School in adjacent Poovathur.

Now almost two decades after the incident, Asna is back in Cheruvanchery as a medical officer at the local government health centre.

A living martyr to the political violence that continues to plague Kannur, she joined work on February 5 as the culmination of several years of extreme determination and courage in the face of adversities.

It was while undergoing treatment at a hospital in Kochi that Asna found inspiration from her doctor, Sundaram, who had lost a leg in a car accident.

Dr Sundaram narrated to her the way he won over obstacles with an artificial leg. That was the turning point. Asna decided to become a doctor.

After spending 86 days in the hospital, she returned home with a prosthetic leg. In all these years, she has used 17 artificial legs.

“In the beginning, I had to change the prosthesis every three or four months to catch up with my growth. Later, it turned into a yearly occurrence. The artificial leg I have now was fixed three months ago at an expense of Rs 1 lakh,” she said.

After every new prosthesis, the stump of the leg would bleed inside the cast. “It would take a minimum of two months for the amputated part to get familiar with the new prosthesis. But I never missed class on account of the pain. Becoming a doctor was always my dream,” Asna said.

The owner of a small grocery, Asna’s father shut his shop and carried her on his shoulders to school on a daily basis in the early days. The lower income group family had to struggle a lot to arrange for money for the leg and to meet her educational expenses.

After scoring A+ in the Secondary School Leaving Certificate exam, she completed her Plus Two with distinction. Then she took admission to an MBBS course at the Government Medical College in Kozhikode under the quota for differently abled persons.

At the medical college, her classroom was on the fourth floor and Asna had to struggle to climb the stairs. When some student activists took up the matter with then Kerala chief minister Oommen Chandy, a Congress veteran, the government installed a lift in the building at a cost of Rs 38 lakh. It was possibly the first time an institution had installed such a costly facility for one particular student.

Residents of Cheruvanchery collected Rs 15 lakh to meet the expenses of Asna’s studies and treatment. The district Congress committee built a house for her. The district leadership of the CPM too provided financial assistances whenever Asna wanted.

Although it is temporary, her posting now is at a medical centre located hardly five minutes from her home. Asna walks every morning to the medical centre, saying it is an occasion for her to give back to the village that has stood by her during trying times.

Now the face of an anti-violence campaign in Kannur, Asna says her dream to become a doctor stemmed from the extreme pain she suffered for years. She wanted always to work in the government sector to serve ordinary people.

A total of 14 RSS-BJP workers from the nearby villages had been arrested in connection with the bomb attack. A local court handed jail terms ranging from five to 10 years to 13 of them. The remaining accused, P.K. Pradeepan, was killed when the crude bomb he was allegedly making exploded, before the verdict came out.

“I don’t have an enmity even with those who attacked me. I treat people without looking into their political affiliations. But we all have to remain vigilant against the criminalisation of politics. Perpetuators of hate politics must be isolated. We have to ensure peace and co-existence,” Asna said.