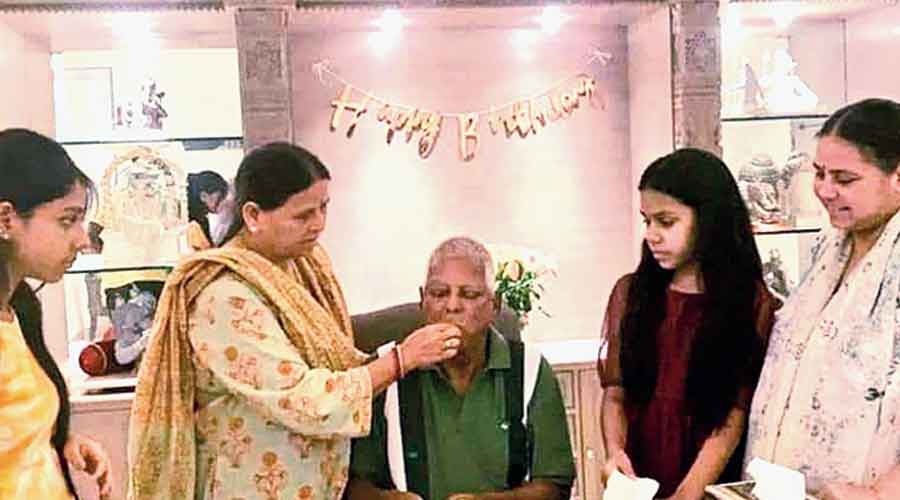 Lalu Prasad celebrates his 74th birthday on Friday with wife Rabri Devi at his side at the Delhi residence of their daughter Misa Bharti
Telegraph picture
Dev Raj   |   Patna   |   Published 12.06.21, 12:38 AM

Rashtriya Janata Dal president Lalu Prasad celebrated his 74th birthday on Friday by cutting a cake with wife Rabri Devi at his side at the Delhi residence of their daughter Misa Bharti, the first time in four years that the former Bihar chief minister has marked the occasion with his family.

Lalu has been serving time in connection with fodder scam cases and recently obtained bail.

RJD leaders celebrated the patriarch’s birthday as “Social Justice and Harmony Day” and fed the poor across Bihar.

After he got bail, Lalu was discharged from the All India Institute of Medical Sciences (AIIMS), New Delhi, where he had been undergoing treatment under incarceration for multiple ailments.

He has been staying at Misa’s Delhi residence since then as his family is unwilling to bring him back to Patna due to the pandemic.

Misa tweeted several pictures of the celebrations where Lalu is seen surrounded by his near and dear ones in front of a birthday cake.

“Papa se hi hai jahan, papa jahan hain wahin jahan hai (My world revolves around my father. My world is where my father is),” Misa tweeted.

In Patna, Lalu’s eldest son Tej Pratap Yadav inaugurated a blood donation camp at the RJD state headquarters. The target was to donate 200 units of blood, but the queue was a long one with several hundred party workers turning up. A cake was also cut there.

Posters depicting the important moments of Lalu’s life have been put up in the state capital. The posters call him a “warrior for social justice”. Some RJD supporters were seen riding horses in Patna city.

RJD leaders and supporters organised feasts for the poor across Bihar and also gifted clothes and other household items to them.

“Laluji has been a bold voice of the poor and downtrodden, hence they were fed by party leaders and supporters across panchayats and towns in the state. Many people also organised prayers for his well-being,” RJD spokesperson Chitranjan Gagan said.

Leaders cutting across party lines extended birthday wishes to Lalu. Hindustani Awam Morcha Secular leader and former chief minister Jitan Ram Manjhi, who is part of the ruling JDU-BJP alliance in Bihar, was among them.

Asked by journalists whether he had greeted Lalu on his birthday, chief minister Nitish Kumar said: “My congratulations. I congratulate everybody.”

Lalu served as chief minister of undivided Bihar twice from 1990 to 1997. He was also the Union railway minister from 2004 to 2009 in the UPA I government.