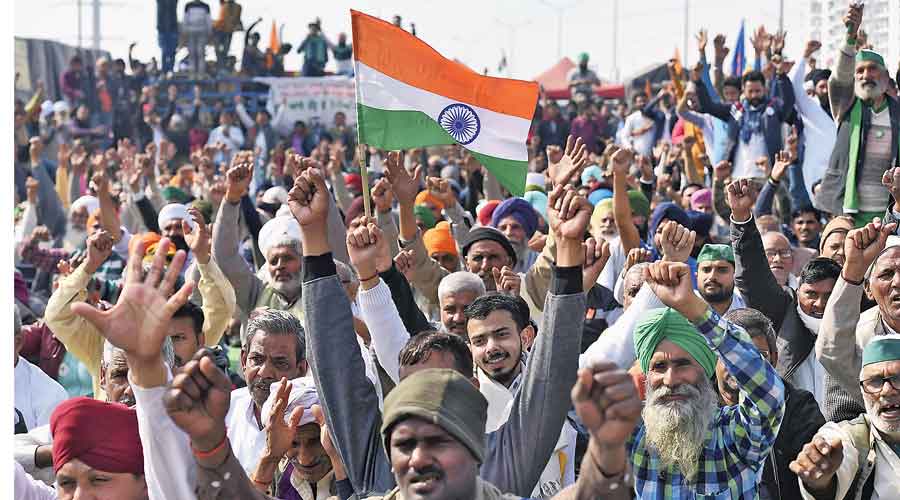 Farmers also claimed that the government has adopted a violent approach against protesters
File picture
Our Bureau, PTI   |   Published 09.10.21, 02:52 PM

Farmer leaders on Saturday demanded that Union Minister Ajay Mishra and his son be arrested in the Lakhimpur Kheri violence case, and said the incident was a pre-planned conspiracy .

Ajay Mishra should also be removed from the government as he started this conspiracy and is also protecting the culprits in the case, Sanyukt Kisan Morcha (SKM) leader Yogendra Yadav alleged during a press conference here.

He also said that the SKM on October 15, which is Dusshera, will burn the effigies of Prime Minister Narendra Modi and Home Minister Amit Shah to protest against the violence.

In the incident on Sunday in Uttar Pradesh's Lakhimpur Kheri, eight people were killed, including four farmers.

"The incident was part of a pre-planned conspiracy and the attackers tried to terrorise farmers," farmer leader Darshan Pal said at the press conference of the SKM, an umbrella body of farm unions, spearheading the stir against three agri laws.

He also claimed that the government has adopted a violent approach against protesting farmers. "But we won't take the path of violence," Ugrahan asserted.

Four of the eight people who died in the violence on Sunday were farmers, allegedly knocked down by a vehicle carrying BJP workers. Angry farmers then allegedly lynched some people in the vehicles.

The SKM also said that on October 18 it will call 'rail roko' to protest the Lakhimpur Kheri violence.

It said that on October 26, they will call for a mahapanchayat.

Meanwhile, Ashish Mishra appeared for questioning before the SIT on Saturday in the crime branch of the Police Lines earlier in the day.

Ashish Mishra appeared before the special investigation team (SIT) before 11 am, the time mentioned in the second summons served to him the previous day after he did not turn up for interrogation on Friday.

While Ashish Mishra is facing questioning by the SIT team headed by Deputy Inspector General of Police (Headquarters) Upendra Agarwal, his father Ajay Mishra is huddled with lawyers at his local party office in Lakhimpur.

Sources said the police team has prepared over two dozen questions for Ashish Mishra to answer in connection with the case.

After two men were arrested on Thursday in the case, police then had pasted a notice outside Ashish Mishra's house asking him to appear before it in connection with the violence that claimed eight lives.