Advertisement
Home / India / Calcutta and nearby hubs among hotspots

Calcutta and nearby hubs among hotspots 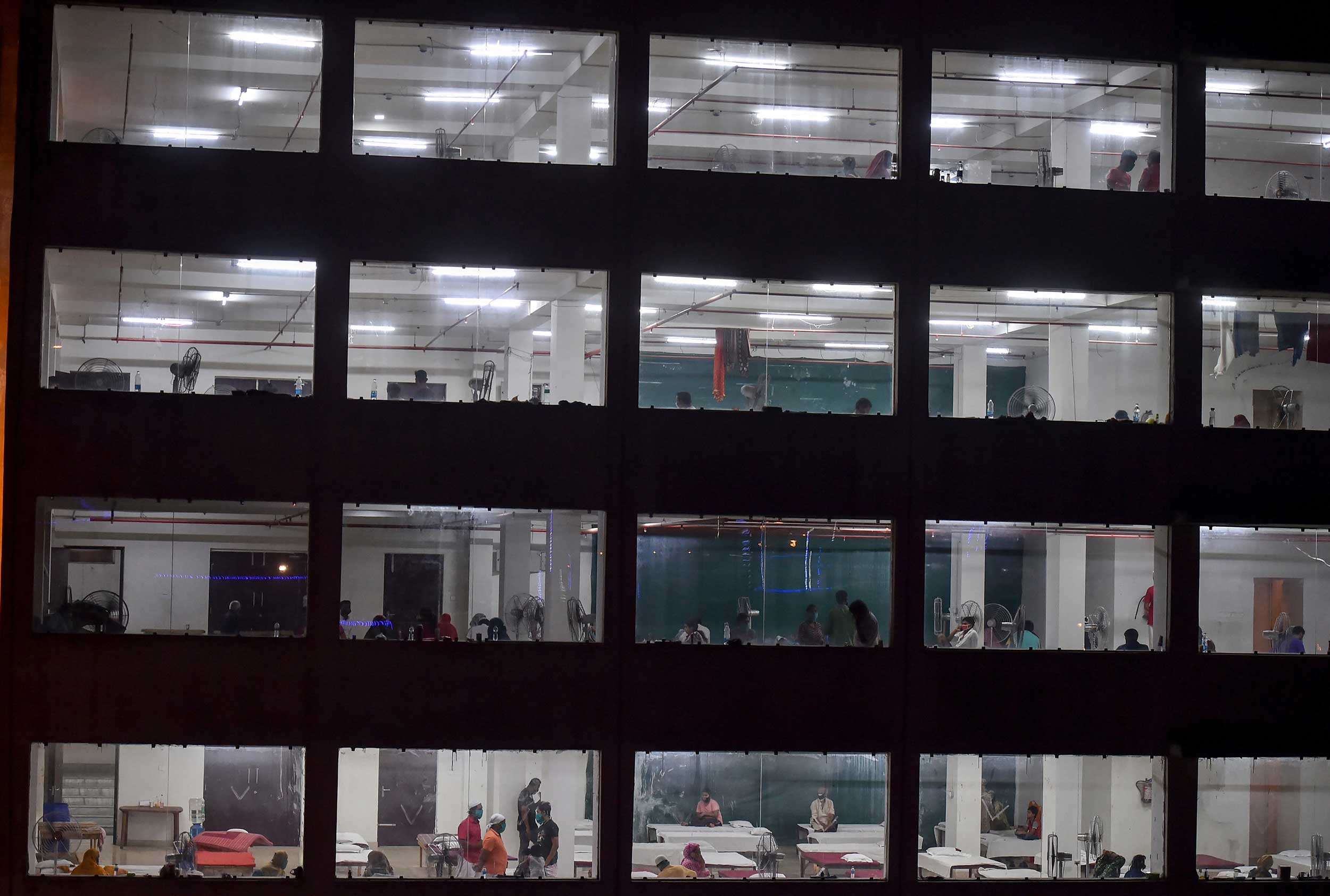 The Union health ministry on Wednesday listed 170 districts nationwide, including Calcutta, Howrah, East Midnapore and North 24-Parganas, as “hotspots” for Covid-19 that can earn the infection-free tag only if they report no new cases for 28 days.

Among the 170 districts, 123 have “large outbreaks” while 47 have reported “clusters” or multiple foci of Covid-19 infections.

But 207 other — non-hotspot — districts across the country, including Jalpaiguri, Hooghly, Nadia, West Burdwan, West Midnapore, South 24-Parganas and Darjeeling in Bengal, have also reported cases.

Union health officials said the hotspots would need to implement the strict containment measures outlined in the health ministry guidelines.

The other districts that have reported cases would also need to implement cluster containment strategies.

Union health secretary Preeti Sudan said in a note to all the states on Wednesday that the national lockdown period up to May 3 should be used to effectively implement containment and surveillance measures in the hotspots to detect and isolate any cases and break the chain of transmission.

The Union home ministry on Wednesday released revised guidelines that propose relaxations in certain activities under the lockdown measures from April 20 to mitigate the public’s hardship. However, the exemptions given from April 20 will not apply to Covid-19 hotspots or containment zones, PTI added. 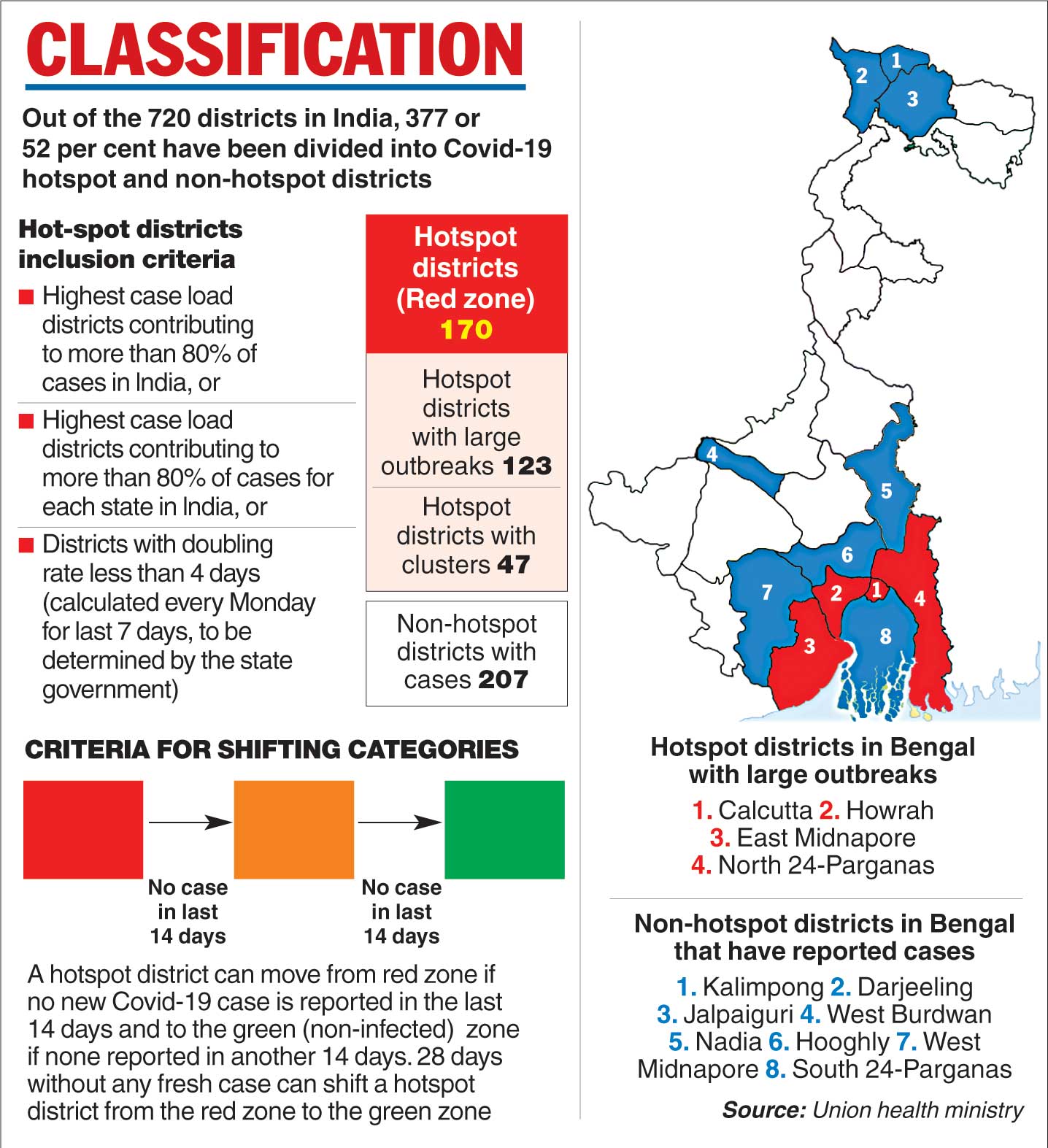 The health ministry had till 5pm on Wednesday recorded 11,933 confirmed cases of Covid-19, including 1,344 patients who had recovered and 392 dead. The patients are scattered across 377 districts, of which 170 are hotspots.

The health ministry said it would assess the districts every Monday and monitor the progress of their containment efforts.

A hotspot -– labelled a red zone -– would become an orange zone if no new cases are reported for 14 days. It would become an infection-free green zone if it has no cases for 28 days.

A public health expert not associated with the health ministry said a changing list of hotspots coming each week from the health ministry would allow the states to channel their resources where they are most needed and keep the public informed about the progress of the containment efforts.

The health ministry has set three criteria for the identification of hotspots.

Health officials did not immediately respond to a query asking under which criterion the four Bengal districts with large outbreaks had been labelled hotspots.

Health officials said they expected states with hotspots to implement a containment plan for large outbreaks released by the health ministry earlier this month.

The plan proposes, among other strategies, geographic quarantine for areas with large outbreaks.

A senior health official said the intensity of the containment operations increased with a larger number of cases or clusters.

According to the containment plan, state health authorities would need to conduct surveillance for influenza-like illness and severe acute respiratory illness throughout the areas under geographic quarantine and their adjoining districts.

Sources in Nabanna cited the list of hotspots as evidence that the Bengal government had shared all the relevant Covid-19 data with the Centre.

“It’s clear we did not hide anything as was alleged from various quarters,” an official said.

Nabanna sources said that with a certain level of economic activity expected to resume in the country after April 20, it was likely that the lockdown measures would be tightened in the hotspots.

Additional reporting by our Calcutta bureau