Around 40 people were also injured in the accident which occurred around 11.30 PM on Wednesday 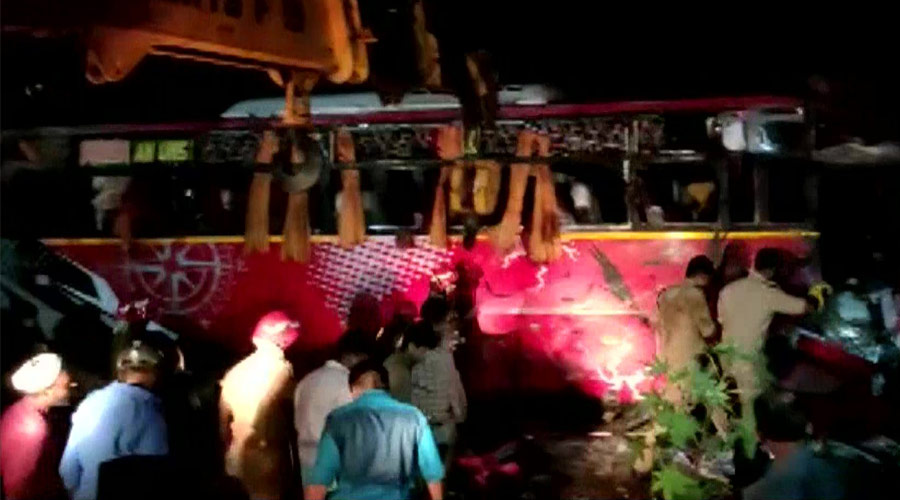 The private bus was carrying 42 students and 5 teachers of Baselios Vidyanikethan Senior Secondary School in Ernakulam, who were on a pleasure trip.
Twitter
PTI   |   Palakkad   |   Published 06.10.22, 09:53 AM

Nine people, including five students, were killed after a private tourist bus hit a state-run KSRTC bus from behind at Vadakkenchery in Palakkad district, Kerala Road Transport Minister Antony Raju said on Thursday.

The minister said the accident occurred around 11.30 PM on Wednesday when the private bus, which was travelling at a high speed, while attempting to overtake a car, hit the rear end of a Kerala State Road Transport Corporation (KSRTC) bus.

"Both the buses went off the road as a result. Nine people, including five students and a teacher, were killed in the accident," he told the media.

The driver of the KSRTC bus told reporters that he was driving at a speed of around 40 km per hour when the private bus suddenly hit them from behind and he barely managed to control the vehicle and prevent it from falling into a ditch.

"The private bus hit us from behind, ripped off a piece of our bus from one side and then went past us at high speed and toppled over," the KSRTC bus driver said. Visuals of the private bus showed a large piece of the state-transport vehicle inside the tourist bus.

The tourist bus had started from the Baselios Vidyanikethan Senior Secondary School in Ernakulam at around 7 PM on Wednesday with 42 students and five teachers for a pleasure trip to Ooty in Tamil Nadu.

Some relatives and parents of the students who went on the trip told media that the bus had arrived two hours late as the driver got delayed while returning from a trip to Velankanni in Tamil Nadu.

The same was also confirmed by Raju when he spoke to scribes in Thiruvananthapuram.

The minister also said that the preliminary view was that the accident occurred due to the high speed of the private bus and the negligence of its driver.

He said that according to information received by him, the bus was travelling at a speed of over 97 km per hour.

The minister also said that the school had to mandatorily inform the Motor Vehicles Department (MVD) about the trip before proceeding with it and this had already been conveyed in writing to all schools in the state.

However, preliminary reports indicate that the MVD was not informed by the school.

MVD officials also turned up at the school to inquire whether they had informed the department of the trip and if yes, which of its offices.

The MVD inquiry assumes significance as the private bus was blacklisted by Kottayam RTO, where it was registered, for violating various motor vehicle rules.

The Kerala High Court also intervened in the matter seeking a report from the police and the MVD regarding the accident and how such a bus, having flashing or laser lights and pressure horns, was issued a fitness certificate.

The division bench also ordered that flashing or laser lights and banned horns should not be used in vehicles and those having the same should be impounded.

A single judge bench of Justice Devan Ramachandran also called for a report regarding the accident, advocate Deepu Thankan, who appears for KSRTC, said.

Meanwhile, Kerala Chief Minister Pinarayi Vijayan and Leader of Opposition in the state assembly condoled the deaths of the nine people in the accident.

They both termed the incident as "shocking" and "painful", in their respective Facebook posts.

Vijayan, in his post, said the cause of the accident would be probed and strict action would be taken against violations of traffic rules.

Satheesan said the excessive speed of the private bus was responsible for the accident and the MVD should strictly implement the law instead of intensifying inspections when major accidents take place.

He said there should be strict checks on the fitness of the tourist buses as this is the season for excursions from educational institutions.

He also said that even schools should inform the MVD about details of excursions and should use vehicles which have cleared all inspections by the department.

State Revenue Minister K Rajan told the media a cabinet meeting will be held to consider providing compensation to the families who lost loved ones in the accident and that counselling may have to be provided to the students who lost close friends and a teacher in the tragic incident.

The students in the bus recall that their bus was travelling at a high speed before it hit the KSRTC bus from the rear and then toppled over.

"There was blood everywhere. We do not know what has happened to some of our friends and teachers who were in bad shape," he said, breaking into tears.

Another student said that she was watching a film when the accident occurred and someone landed on top of her as the bus toppled over.

"Someone pulled me and another girl out from the bus. But the girl sitting close to me could not be pulled out until much later," she told media.

According to police, of the five students who died, three were girls.

All of the deceased students were aged between 15 and 17 years.

More than 40 people were injured in the accident.

The KSRTC bus was going from Kottarakkara in Kerala to Coimbatore in Tamil Nadu and had 81 passengers, of whom three died in the accident.