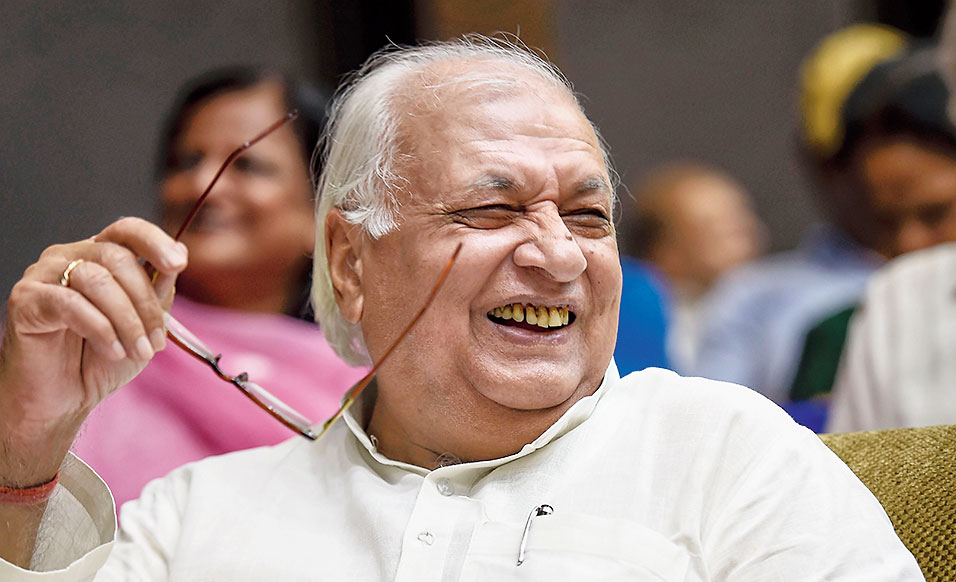 Kerala governor Arif Mohammed Khan has rejected the state cabinet’s decision to convene a special session of the Assembly to pass a resolution against the contentious farm laws.

The veto on the eve of the proposed one-hour session on Wednesday injects an extraordinary constitutional confrontation into the ongoing controversy over the farm laws that has so far been playing itself out on the streets and in the court.

The rejection also shows how prickly the farm laws have become for the Narendra Modi government that otherwise preaches federalism.

The CPM-helmed ruling Left Democratic Front and the Congress-led Opposition United Democratic Front found the governor’s decision a violation of his constitutional obligation to honour a decision taken by the state cabinet and sought his immediate recall.

Chief minister Pinarayi Vijayan wrote to the governor to say it was wrong to assume there was no urgency to call the session when there are serious concerns about Kerala’s farm sector, and added that the governor’s refusal to do so was a violation of the Constitution.

“The President and governors should function as per the advice of the council of ministers. Shamsher Singh Versus the state of Punjab (1975) had made this clear,” Vijayan said, referring to a landmark Supreme Court verdict.

The Sarkaria Commission on Centre-state relations had also said a governor is duty-bound to abide by the decision of a government on convening or adjourning the Assembly, Vijayan wrote. “The governor does not have any powers to refuse if the cabinet recommends to convene the Assembly,” he said.

Khan, who had left the Congress to join the BJP before he became governor, has a history of crossing swords with the Vijayan government in Kerala, especially over the Citizenship Amendment Act early this year.

Opposition leader and Congress veteran Ramesh Chennithala urged the government to convene the session in the members’ lounge in the state Assembly building.

“The members should assemble at the members’ lounge and pass the resolution against the farm laws,” Chennithala said.

On the farm law issue, the government had twice clarified the governor’s queries on the need to call a special session when the budget session is scheduled for January 8.

Assembly Speaker P. Sreeramakrishnan described the governor’s rejection as an “unbelievable decision” and said there were no restrictions in calling a special session of the Assembly. “It is the cabinet that should take such decisions,” the Speaker added.

Kerala agriculture minister V.S. Sunil Kumar said the governor’s decision had given rise to an “extraordinary” situation in the state.

“It is a fact that this has created an extraordinary situation. Our people should realise this. The governor cannot reject a cabinet’s decision to call an Assembly session,” said Sunil Kumar.

Senior lawyer Kaleeswaram Raj said governors had to go by the cabinet decisions on such matters.

“Article 163 of the Constitution clearly states that the council of ministers ‘aids and advises’ the governor, and not otherwise. Article 174 says the governor shall ‘from time to time summon the House’. That’s where Article 163 comes into play,” Raj said.

“The advice is to convene the Assembly, which he has to do. Or else, what will happen is even when 140 MLAs (of Kerala) want to have the session for whatever reason, the governor who is a nominee of the Centre, will be able to stall it,” Raj told The Telegraph on Tuesday.

“The governor is now stalling, despite the willingness and desire of the elected representatives. That goes against federal principles enshrined in the Constitution because he is acting like a king and challenging the will of the people,” said Raj.

“Former governor of Karnataka and Himachal Pradesh V.S. Ramadevi had once quoted R. Venkata Rao, professor of Andhra University, as saying that the governor’s post is ‘useless when inert and dangerous when active’. This is illustrated in today’s development in Kerala,” the senior lawyer said.

“The governor’s decision citing lack of urgency is undemocratic. Nationwide protests are on against the farm laws. These laws will adversely impact even Kerala’s farmers,” Chennithala, the Congress leader, said, explaining why the Opposition backed the government’s move to convene a special session.

Congress MP T.N. Prathapan said: “Other Opposition-ruled states have passed such resolutions. Our demand is that the President should recall the governor who has taken an unconstitutional decision.”

It was the second time that political parties in Kerala have called for the recall of Khan who started his term by taking a confrontationist posture against the Left government.

The governor had engaged in an open battle with the state government over its decision to approach the Supreme Court against the Citizenship Amendment Act in January.

While the government had then maintained there was no need to seek the governor’s prior approval before going to court, Khan had insisted he could stop any move to question a legislation that had received the President’s assent.

The governor again intervened when the Assembly passed a resolution seeking the withdrawal of the CAA. Khan had then remarked the resolution had no legal binding.

He soon read out the policy speech that had a paragraph against the CAA, clarifying that he was doing it in line with the chief minister’s “wish”.