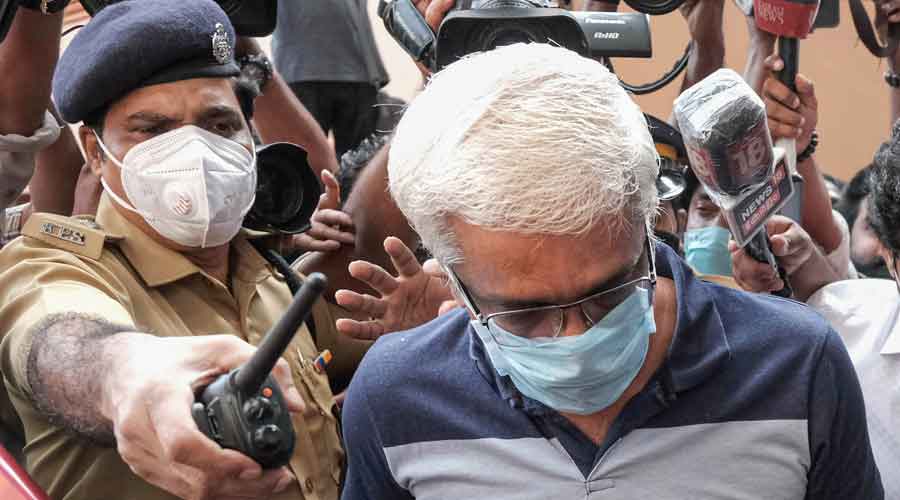 Suspended IAS officer M. Sivasankar being taken into custody by Enforcement Directorate (ED) for questioning in connection to the Kerala gold smuggling case
PTI
Our Correspondent   |   Bangalore   |   Published 29.10.20, 01:04 AM

ED officials reached an ayurvedic hospital in Thiruvananthapuram where Sivasankar was undergoing treatment for disc prolapse within five minutes of the high court pronouncing its verdict.

The court had earlier stopped the ED and customs department from arresting Sivasankar until October 27 pending the hearing of his bail pleas.

A bench of Justice Ashok Menon on Wednesday dismissed the bail pleas and removed all obstacles to any further action, including arrest, by the ED and customs department.

The court considered the ED’s contention that Sivasankar was in constant touch with Swapna Suresh, a key accused in the gold smuggling case, and it was possible that he knew about her activities.

Sivasankar was driven to the ED office in Kochi, around 200km away, where he would be questioned by the central agency that is probing a money-laundering angle in the gold smuggling case.

Customs officials met their ED counterparts, suggesting that they too might want to interrogate Sivasankar.

On July 5, the Thiruvananthapuram airport customs had busted the attempt to smuggle 30kg of gold worth Rs 14.82 crore inside a diplomatic bag addressed to the attaché of consulate-general of the United Arab Emirates in the Kerala capital.

The state government had quickly removed Sivasankar from his duties and later suspended him from service as more details emerged about his links with Swapna, P.S. Sarith and Sandeep Nair — the three accused in the case.

Sivasankar had in his bail pleas argued that he was neither an accused nor a witness in any of the cases filed in connection with the smuggling.

Senior lawyer P. Vijayabhanu, who appeared for Sivasankar, highlighted how the ED, National Investigation Agency and the customs department had questioned him for over 90 hours but could not find anything to incriminate him.

The ED had opposed the anticipatory bail plea and cited Sivasankar’s closeness with Swapna whom he introduced to chartered accountant P. Venugopal and helped open a bank locker, allegedly to launder the unaccounted money.

The ED had contended that Sivasankar knew Swapna was trying to launder her share from gold smuggling when he sent her to his chartered accountant.