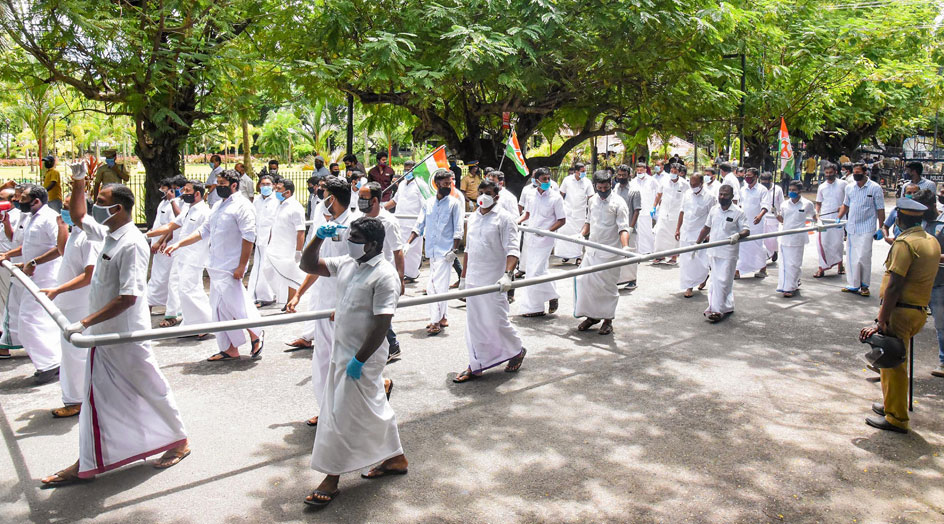 The Opposition in Left-ruled Kerala has come under criticism for clinging onto the salacious elements of an airport gold smuggling case rather than focus on the racket that may have misused access to a friendly country’s diplomatic baggage.

Six days after the diplomatic baggage was found laden with 30kg of 24-carat gold, the Opposition United Democratic Front led by the Congress, and the BJP are yet to take their eyes off the alleged links between an accused woman and an IAS officer.

The Opposition has been ceaselessly referring to a possible association between Swapna Suresh, who was sacked from her contract job with a private entity at the Space Park of the IT department soon after the case was reported on Monday, and M. Sivasankar, the IAS officer who has been removed from the helm of the chief minister’s office and the IT department.

Swapna is absconding, as are co-accused Fazil Fareed and Sandeep Nair. The other person named in the FIR lodged by the NIA, P.S. Sarith, is in custody.

“The Centre’s decision to assign the NIA underlines the state government’s stand that welcomed an investigation by any agency. The conspirators, beneficiaries and their protectors should be brought to justice,” Balakrishnan added.

However, the Congress and the BJP have continued to target the chief minister. Balakrishnan urged the Opposition parties who had claimed to have evidence against the CMO to hand over the proof to the NIA.

“Many had claimed they have evidence. Now they have to hand over the evidence to the NIA since Section 43F of the UAPA Act provides an opportunity to do so,” he said.

The narrative of the Congress and the BJP has been focused on what Sivasankar may have been doing at the apartment of Swapna., who is said to have got the Space Park job by using a fake BCom degree.

CPM politburo member M.A. Baby told a news channel: “The central issue is who sent the gold, who was the beneficiary and who all are part of this racket. But the Opposition is still focusing on the periphery and not who the accused were working for and where the gold was being sent.”Congress veteran Ramesh Chennithala, the leader of the Opposition in the Assembly, on Saturday wrote to director-general of police Loknath Behera demanding a separate investigation although the NIA has been on the job for the past two days.

“If the police fail to discharge their duties properly, I will have to go forward with legal action,” Chennithala told a media conference on Saturday.

In a letter to the state police chief, Kerala BJP state committee member R. Sandeep has also sought a police investigation. He too wanted the police to probe how Sivasankar helped Swapna and whether Swapna had used fake identity and business cards with the government insignia on them.

Chief minister Vijayan had clarified that it was beyond the police’s jurisdiction since the incident happened at Thiruvananthapuram airport, which is under the customs department.

Leaders of the ruling Left Democratic Front said the Opposition’s demand for a police investigation was a ploy to pin down the government. “The Opposition just wants to accuse the government of scuttling the probe,” said senior CPM leader M.B. Rajesh.Chennithala defended the protests amid the pandemic, during which safety protocols are said to have been flouted. “Is the chief minister saying that the Opposition should just sit and watch when such a case has rocked the state?” he asked.

“We did not organise the kind of protests (Bengal CPM secretary) Surjya Kanta Mishra has been leading against the Bengal chief minister,” Chennithala added, taking a dig at the CPM.

“They call it protest. But in reality it is not a protest. It is a wicked act to drown this state in the pandemic,” he said, citing how some clusters in Kerala were threatening to turn into a community spread.

“Even wealthy nations could not cope up with community spread, with doctors facing the severe trauma of deciding who should get a ventilator due to a shortage,” Vijayan said.

“They could not even give a decent burial to the deceased who had to be buried in mass graves. What could be our situation…? This is what we should see. We don’t have any special safety shields to stop a community spread,” the chief minister added.