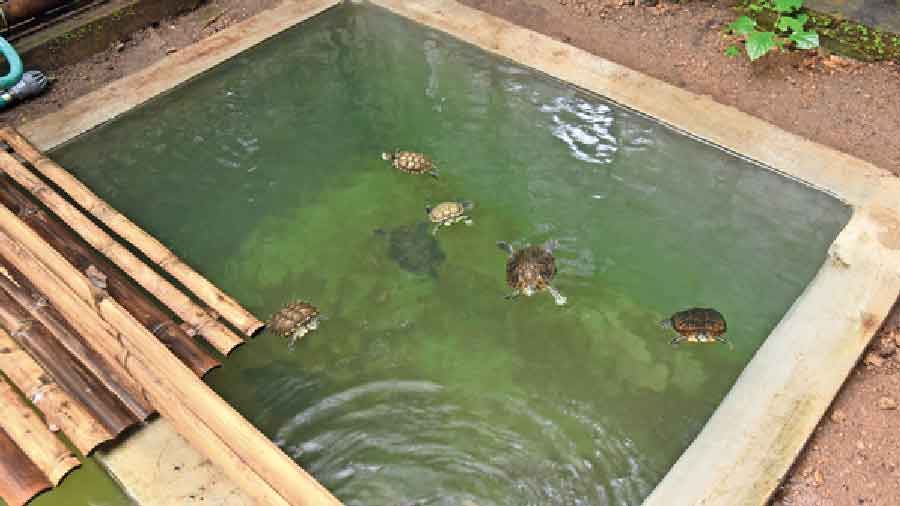 When Pachu found a turtle struggling on his baited fishline, he was curious. He took a picture of his catch and posted it on his grandfather’s Facebook page.

His grandfather, Dr Sankar, had been a scientist at the Kerala Forest Research Institute (KFRI), and his friends on Facebook responded fast. They identified the animal as a red-eared slider turtle — Trachemys scripta elegans — an alien invasive species in India.

It is native to western US but has spread across the world through the pet trade, fuelled by the Ninja Turtles series that was a hit among children. Parents of kids addicted to the series bought the turtles from pet shops. The youngest turtles are small enough to be packed in a matchbox. Children could carry the turtles in their pockets and surprise friends.

The grandfather-grandson duo, having identified the turtle as a native species, contacted the Nodal Centre for Biological Invasions (NCBI) at the Kerala Forest Research Institute.

The NCBI tracks invasive alien species and is tasked with detecting invasions early to mount a rapid response.

In their new locations and in the absence of natural predators, alien species — whether brought knowingly or unknowingly — have the potential to breed unchecked and displace native species and cause environmental or economic harm.

The NCBI knew about the turtle pet trade but did not know the species had slipped into the wild. The NCBI took the turtle from Pachu and rehabilitated it in a greenhouse at the KFRI. The NCBI also realised that the threat of releasing the pet turtles into the wild was looming and decided to sensitise the general public on this.

The message, which was spread across print, visual and social media, was simple and clear: Don’t release your pet turtles into the wild, and if ever you need to dispose of them, call 0487-2690222. This is the KFRI helpline that functions as the single window to receive queries from the general public on all issues regarding trees or invasive species.

Over three weeks, the NCBI received 119 calls from people wishing to give away their pet turtles. An NCBI vehicle crisscrossed Kerala and collected 210 turtles while 30 turtles were brought to the NCBI by their owners.

Bloggers and vloggers explained their experiences of handing over their pet turtles. Every turtle brought to the NCBI came with an emotional baggage. When collected from homes, kids hid behind their mothers with teary eyes and in a few cases, while the parents decided to let go of the turtle, the children put up an emotional fight to retain it.

The NCBI has created new facilities at three places — Nilambur, Peechi and Palappilly — to house the turtles in large pools.

The slider turtle harbours salmonella and shigella — bacteria that can cause infections in humans.  The NCBI has detected salmonella and shigella from buccal and cloacal swabs collected from these turtles. With recent reports of the death of children in Kerala due to shigellosis, the turtles are a sure suspect, although the cause-effect relation remains unproven.

The slider turtle is an omnivore that feeds on algae, plants, fish, amphibians and the like and has considerable killing power in aquatic ecosystems. It could wipe out native species.

The three NCBI restoration sites now host 240 turtles from across Kerala and other states. It is the first attempt of its kind in India to contain the spread of an invasive alien species by rehabilitating them.

The NCBI is developing genetic techniques to detect the presence of the slider turtle in the wild. It is encouraging the government to effect legislation to stop the trade of this invasive alien species. The general public is being alerted on the probable impact the turtle can cause in open, wild environments and are being advised to keep them safe. If ever they want to give away the turtles, they need to approach any of the NCBI repositories.

For NCBI scientists, the slider turtle is an exquisite research material. They placed a surveillance camera at the Peechi rehabilitation site and monitored their behaviour day and night, watching the turtles feed, bask, display aggression, mate and lay eggs. Scientists are also trying to explain the changes in the turtle’s body shape with its feed intake.

The NCBI has established a new way to contain an invasive alien species, generating awareness among the public and building rehabilitation facilities to house them.

The NCBI staff expects children who deposited their turtles to visit the rehabilitation centres. Science has never been so sensitive to emotions.