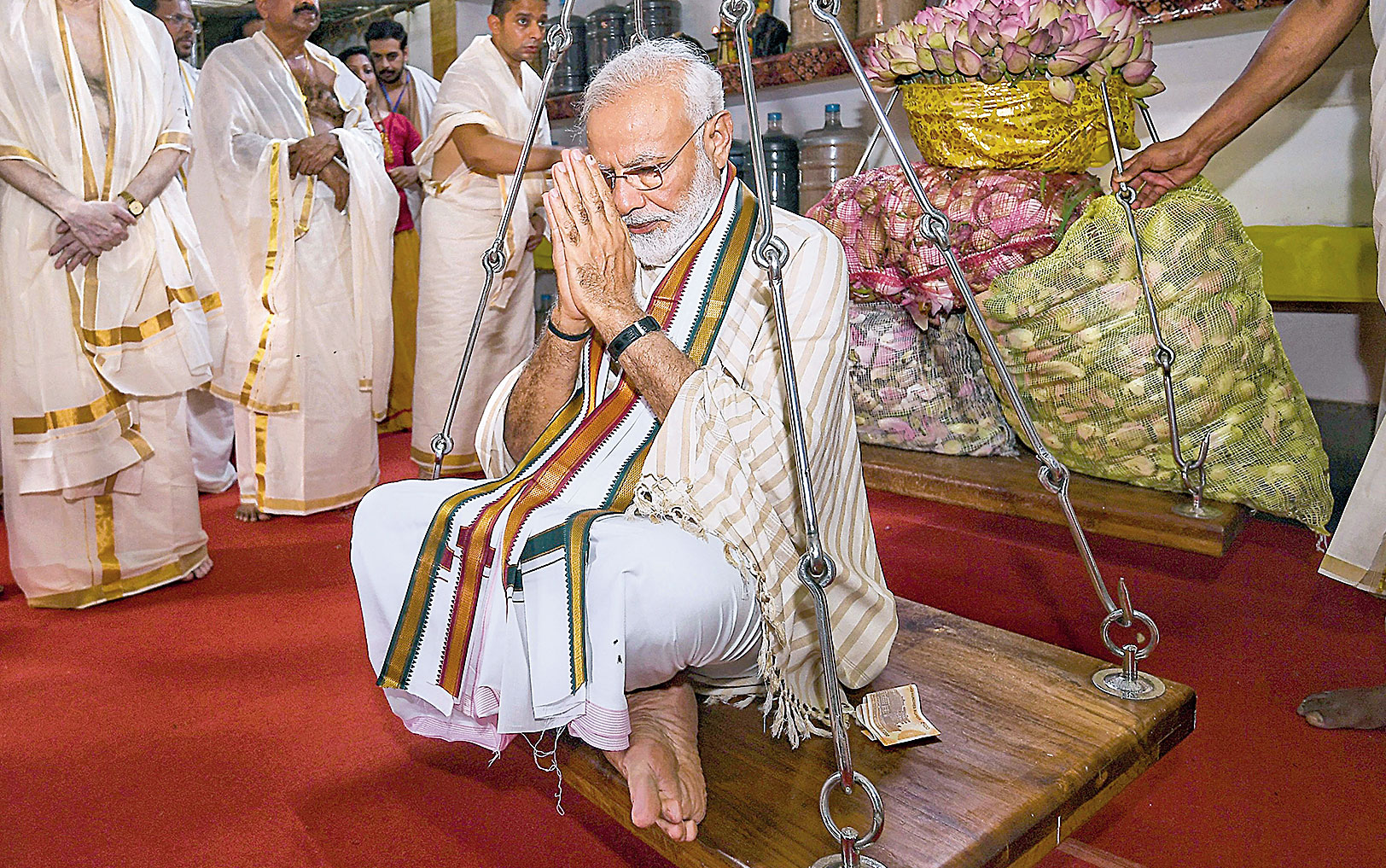 Prime Minister Narendra Modi takes part in Tulabharam, a ritual in which a devotee is weighed against an offering (in this case, lotus flowers), at the Lord Krishna temple in Guruvayur in Kerala on Saturday.
(PTI)
PTI   |   Guruvayur   |   Published 09.06.19, 01:16 AM

Prime Minister Narendra Modi on Saturday said political parties and pundits had failed to gauge the public mood ahead of the Lok Sabha elections and thanked voters for their support, his assertion coming in a state where the BJP drew a blank again.

Modi said he had chosen to visit Kerala, although his party didn’t have a single MP from the southern state, since it was “as dear” to him as Varanasi, his constituency in Uttar Pradesh.

The country has seen that “people are God” in elections, he told the “Abhinandan Sabha” the BJP’s Kerala unit had organised.

“Political parties and political pundits could not gauge people’s mood. So did those involved in conducting (poll) surveys. But people gave a strong mandate to the BJP,” he said, thanked voters for choosing his party.

“The 2019 Lok Sabha elections marked a victory for positivity and a resounding rejection of negativity. With this spirit, let us all work together to build a new India.”

Modi’s statement came a day after Congress chief Rahul Gandhi had accused him and the BJP of spreading “hatred and intolerance”.

“Modi might have money. He might have media by his side.… He might have rich friends with him but the Congress party will continue to fight against the intolerance created by the BJP,” Rahul had said on Friday on a roadshow in Wayanad to thank voters in the constituency for electing him.

Modi changed into a customary white mundu (dhoti) and shawl before stepping inside the temple.
(PTI)

On Saturday, Modi said some people would have wondered why he chose to visit Kerala despite the BJP “not opening its account” from the state in Parliament. “I come to Kerala with a deep sense of gratitude to the people,” the Prime Minister said. “Yes, our party did not win a seat here but I will serve the state with great vigour and deepen the bond with its wonderful citizens.”

Modi wore a traditional Malayali attire on his first visit to the state since assuming charge as Prime Minister for a second successive term. “Those who made us win or those who did not, both are our (people). Kerala is as dear to me as Varanasi,” he said.

“We are not in politics to only form a government. We are here to serve the people of the country. People choose their ‘jan pratinidhi’ for five years, but we are ‘jan sevak’, committed to serving the people life-long,” Modi said.

Modi also dwelt on the Nipah, the deadly virus that has resurfaced in Kerala. “I assure the Centre’s full support to the state government and the people of Kerala regarding all facilities required to tackle the situation. The state and the Centre will work shoulder-to-shoulder to fight the spread of the Nipah virus,” he said.

The Prime Minister sought to bring up the emotional link the people of his home state Gujarat have with places of significance associated with Lord Krishna, such as Dwarka, Guruvayur and Udupi.

“I have got a chance to come to this land of Guruvayur once again. This is a source of inspiration,” he said in his speech soon after offering prayers at the Krishna temple.

The Prime Minister said his government had created a separate ministry for fishermen and animal husbandry to strengthen the economy of the country’s coastal and rural areas.

His government, he added, has decided to run a vaccination drive across the country for animals to eliminate ailments like the foot and mouth disease.