Statement silent on new media policy the govt had framed in June, empowering the State to decide what is fake news and act on it, or on the crackdown on journalists 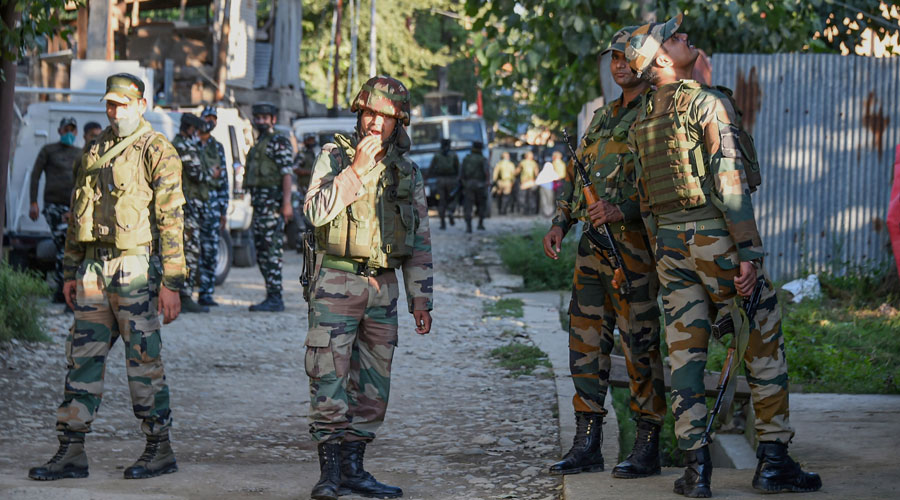 Security forces during an encounter with militants at Kawoosa area of the Central Kashmir on Monday.
PTI
Muzaffar Raina   |   Srinagar   |   Published 11.09.20, 06:11 AM

Kashmir’s top editors’ body has crawled out of its self-created shell, not to break its silence on the government’s crackdown on journalists or the sufferings of the Valley’s people but to chastise criticism of this silence as “vilification”.

The Kashmir Editors Guild on Wednesday held its first meeting since the removal of Jammu and Kashmir’s special status on August 5 last year and the accompanying government clampdown on the then state’s entire population.

Yet the only unambiguous words of censure in its statement, issued on Thursday, were reserved for the “vilification” by “vested interests” looking to “undermine the institution of media in Kashmir”.

Guild sources suggested the targets included some leading Jammu and Kashmir journalists who have questioned their peers’ reportage, for instance, the way most of them have sidestepped the pellet injuries caused to Muharram mourners in security force firing this month.

“KEG members regretted that the vilification campaigns launched by the vested interests from within the systems of governance, within and outside the wider social media and offshore are aimed at undoing the Himalaya of reportage on which Kashmir’s history rests,” the statement said.

Guild sources said the editors had been particularly incensed by the writings of Anuradha Bhasin — executive editor of the Jammu-based The Kashmir Times, the region’s oldest English-language newspaper — in the news and opinion website, The Wire.

“The Valley’s leading newspapers have chosen to keep their publications alive by killing news stories and burying all morals of journalism,” Bhasin has written.

“For over a year, I have grappled with the question of ethics — whether as an editor of the newspaper Kashmir Times, I might be crossing the principled stand of commenting on the content and conduct of ‘rival’ newspapers, and thus held my peace.”

Kashmir’s newspapers had in the past been sympathetic to the azadi cause and prioritised the coverage of rights violations by the forces.

But after remaining shut in the initial days of the post-August 5 clampdown, most local newspapers had turned into voices of the government as they resumed publication. They provided wide publicity to official versions of events while reports of the people’s sufferings and outrage found little space.

Their journalists, however, continued to face all kinds of hurdles, particularly because of a communication bl-ockade during which Internet and phone services were suspended for months. Many jo-urnalists were hounded, summoned, arrested or booked under the anti-terror law.

But the guild’s statement mentioned none of this as the editors stuck to their year-old policy of not annoying the government lest there be a backlash or an advertisement squeeze.

Bhasin had written that a race “driven by purely material considerations is not my line of work”.

“More importantly, when the actions of some affect a trend impacting journalism as a whole — and perilously so — it is important to speak out.”

Bhasin had filed a public interest plea in the Supreme Court last year to fight the government ban on the Internet, mobile and landline services.

Her newspaper, which is part of the guild, has since borne the brunt of alleged government reprisal. Since November, guild sources said, the newspaper had received no government advertisements — a major source of revenue for the region’s dailies.

“They have also received notices to vacate government-allotted space for their office in Srinagar and (residential) accommodation in Jammu,” a source said. Many other newspapers too enjoy such facilities.

Financial problems have forced Bhasin’s newspaper to shut down its Valley edition.

Thursday’s guild statement spoke vaguely about some of the issues confronting the media in the Valley.

“The members said that the forum must meet frequently to respond to the evolving situations and to revisit the interventions that have taken place in the last more than a year,” it said.

The statement was silent on the new media policy the government had framed in June, empowering the State to decide what is fake news and act on it, or on the crackdown on journalists.

“The purpose of the meeting was also to revive the KEG. A three-member committee has been set up to decide about new elections to the body,” a source said.