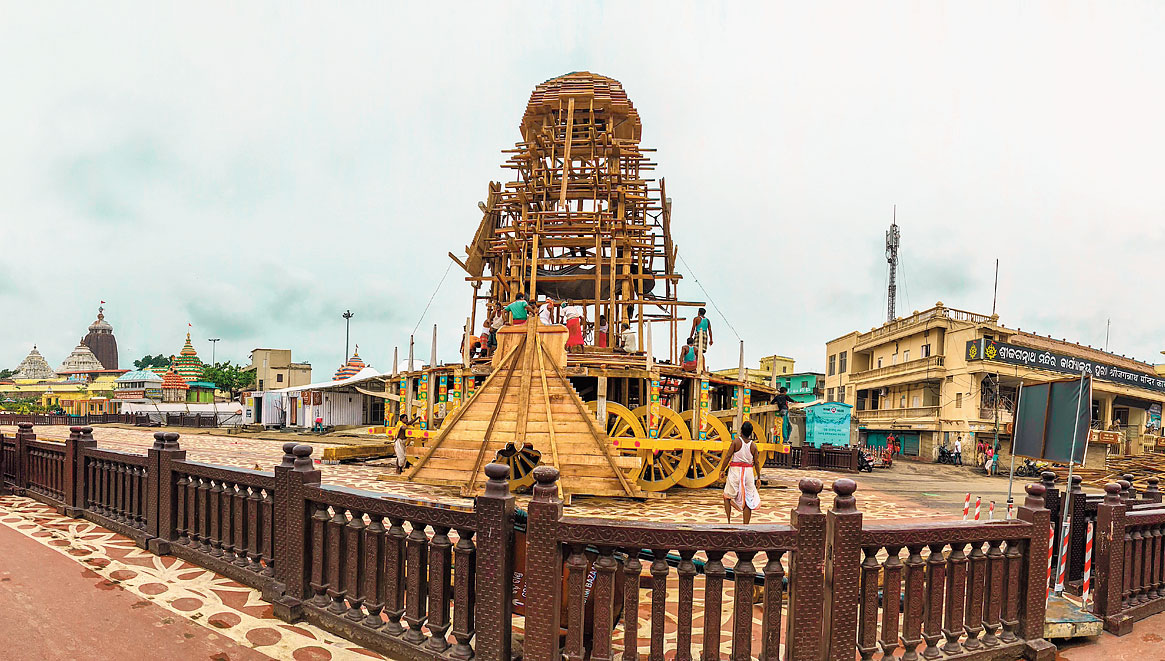 Two questions are on everyone’s mind in Odisha.

One, will the Rath Yatra be held this year at all?

Two, if the Odisha government allows the event, should elephants be harnessed to pull the three chariots on June 23, or should heavy machinery be deployed as Orissa High Court has suggested as an alternative option?

Normally, tens of thousands of people pull the three massive chariots, carved from a total of 10,800 cubic feet of wood, during their 2.5km journey from Bada Danda (Grand Road) from the Jagannath temple to the Gundicha temple.

But this year the coronavirus has made it certain that no devotees would be allowed to participate --- the premise on which the high court suggested the elephant and machine options on June 9.

A Supreme Court hearing of a public interest plea on Monday could be key to whether the nine-day Rath Yatra might be allowed this year.

Although no decision has been taken, some senior temple servitors have said they would oppose the use of machines.

“In the history of Jagannath culture, elephants have been used to pull the chariots,” a servitor, Premananda Das Mohapatra, told The Telegraph.

However, the tradition stopped nearly half a century ago and a brief attempt to revive it in 2002 had ended in tragedy.

Till 1972, hati seva (elephant service) was part of the festival. Three elephants belonging to the Puri king would escort the chariots during the chhera panhara --- the king’s ceremonial sweeping of the chariots.

“The elephants would sometimes help pull the chariots if they got stuck on the muddy Grand Road those days,” said Jagdisha Das Mohapatra, another servitor.

“Besides adding a royal touch to the event, the elephants also symbolised prosperity and were considered a good omen.”

But lack of patronage from the Puri royal family, which no longer keeps elephants, ended the practice after 1972.

The state government reintroduced the elephant service in 2002, hiring a single animal from a private owner. But Laxmi, the female elephant, died while returning to its owner, and the experiment was not repeated.

If the Rath Yatra is held this year and the temple administration decides in favour of elephants over machines, the animals may have to be brought from the Nandankanan Zoo, about 75km from Puri.

How many jumbos will it take to pull a chariot, since --- unlike their pre-1972 predecessors --- they will not have help from devotees, servitors and police?

“I reckon that three to four elephants will be needed per chariot,” a servitor said.

On Sunday, the state BJP accused the Biju Janata Dal government of trying to avoid organising the Rath Yatra this year, citing the “lack of preparations” with just over a week left.

State BJP general secretary Prithiviraj Harichandan alleged that to get the high court to scrap this years’ Rath Yatra, the government had got an individual to move a public interest plea seeking a directive whether the festival should be held.

“But the high court threw the ball back in the government’s court, asking it to take the decision. Now the same person has moved a PIL in the Supreme Court (to be heard on Monday),” he said.

The Biju Janata Dal has appealed to people not to politicise the Rath Yatra.

“The government is in touch with the Puri Shankaracharya, Puri Gajapati (scion of the erstwhile royal family) and the servitors, and will decide after consulting all, keeping in mind the Covid-19 guidelines,” senior MLA Amar Prasad Satpathy said.

Each chariot is pulled with the help of four ropes, each eight inches thick and 250 feet long.

The high court had said: “We are inclined to observe that deploying heavy-duty machinery or any other means like elephants... for pulling the chariots would obviate the necessity of involving large number of persons (devotees and servitors).”