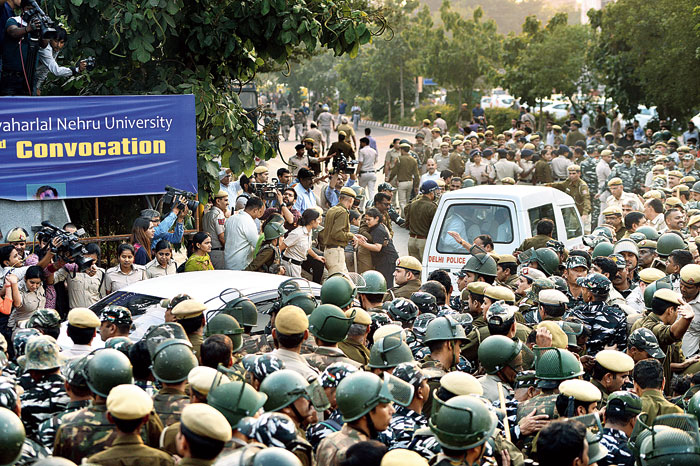 Hundreds of students of Jawaharlal Nehru University marched through several barricades put up by the security forces on Monday to protest outside the venue of the varsity’s convocation, where the police caned them and used water cannons.

Union human resource development minister Ramesh Pokhriyal tried to pacify the students but the vice-chancellor refused to meet them.

The campus has been on strike for a fortnight since the approval of a new hostel manual that raises the total fees by an estimated 73 to 84 per cent, which is unaffordable for more than 40 per cent of the students, according to 2017-18 data on family incomes.

The new manual reiterates entry and exit timings and a dress code that have never before been enforced.

Students have locked a dean’s office and gheraoed officials to demand they reject the manual or resign. The Central Reserve Police Force was deployed on the campus last Monday.

Vice-chancellor M. Jagadesh Kumar has not met the students or representatives of the students’ union — which his administration has not recognised so far — during this crisis.

On Monday, Delhi Police and the CRPF secured the gates and roads around the 1,000-acre campus after the students’ union called for a march against the convocation, to which Vice-President M. Venkaiah Naidu and Pokhriyal had been invited.

Since the convocation ceremony was reintroduced in 2017, it has been held at the All India Council of Technical Education (AICTE) near JNU’s western gate, which was heavily barricaded by the CRPF on Monday. Only select journalists were allowed at the convocation, which began at 9.30am. 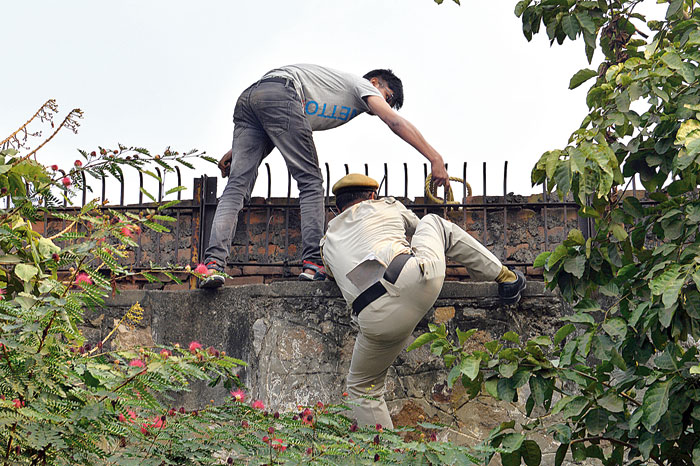 A student tries to scale the wall and enter the AICTE premises and a policeman strives to thwart him. The policeman eventually succeeded.
Picture by Prem Singh

Students pushed aside barricades and policemen at the north gate, Baba Gangnath Marg and Nelson Mandela Marg, marching 2.5km before they were stopped by a huge police contingent near the west gate at 11.30am, by when Naidu had apparently left.

In less than an hour, the students had pushed the police back and lain siege to the AICTE’s only gate on Nelson Mandela Marg, demanding the vice-chancellor meet them.

Inside, although no one disrupted the ceremony, several graduates requested they be allowed to meet the vice-chancellor.

“After the event (around 1pm) the vice-chancellor and other officials entered a guesthouse on the premises and many of us repeatedly requested a meeting with him,” Janani Kandhadai, who received her PhD in linguistics, told The Telegraph.

“An official rudely refused to let us in. We then walked to the gate, outside which other students were sloganeering, and we too started protesting. The vice-chancellor sent a few deans to talk us out of the protest but he still wasn’t willing to meet us.”

Around 12.45pm, the police allowed the students’ union leaders to go inside. They met Pokhriyal, whom they handed a memorandum demanding a meeting to discuss a new hostel manual and revocation of the hostel curfew timings, dress code and the ban on protests.

The students argued the fee hike would raise their mess bills to double or triple the amount of a monthly merit-cum-means fellowship. They also protested the hike in the room rent, saying no satisfactory reason had been provided to them.

Pokhriyal’s ministry later tweeted that a solution would be found soon, and the students’ union leaders said the minister had assured them that the vice-chancellor would meet them in a week. Kumar and other JNU officials had not responded to calls and messages from this newspaper till late at night.

Outside the AICTE gates, the agitators refused to budge without meeting the vice-chancellor although the police and the students’ union asked them to return to campus. The police used a water cannon and caned the students but were still unable to disperse the crowd, which blocked half the Nelson Mandela Marg, which connects parts of south Delhi to the airport.

Around 4.15pm, the police — led by several senior IPS officers — were finally able to create an exit for Pokhriyal’s car, six hours after the minister had arrived. Before the minister left, the police pushed the protesting graduates back into the building.

The students dispersed after 6pm. At least one student fractured his leg in the police action and one constable was seen with an arm bleeding from scratches.

The JNU Teachers’ Association passed a resolution condemning the police action and demanding the vice-chancellor resign.

“The police action was clearly only to defend the obstinate refusal of the vice-chancellor to engage in any dialogue with students on their concerns,” the teachers said.

The students’ union said: “JNU remains a university still accessible to the poorest and most marginalised sections and this present move is a brutal attack on not just current students but on all those students from such backgrounds who fight and aspire for higher education. This is why the protest will only intensity if the demands are not dealt with soon.”

The JNU administration criticised the students for causing disruptions.

“It is unfortunate that instead of participating in a constructive dialogue for which the administration is always open and has made several attempts for conducting discussions, the protesting students are persistently staging strikes, gheraos, and demonstrations in the university and causing administrative shutdown and academic loss,” it said.