Jobless in lockdown, 54-year-old who speaks only Santhali started journey from Delhi in August 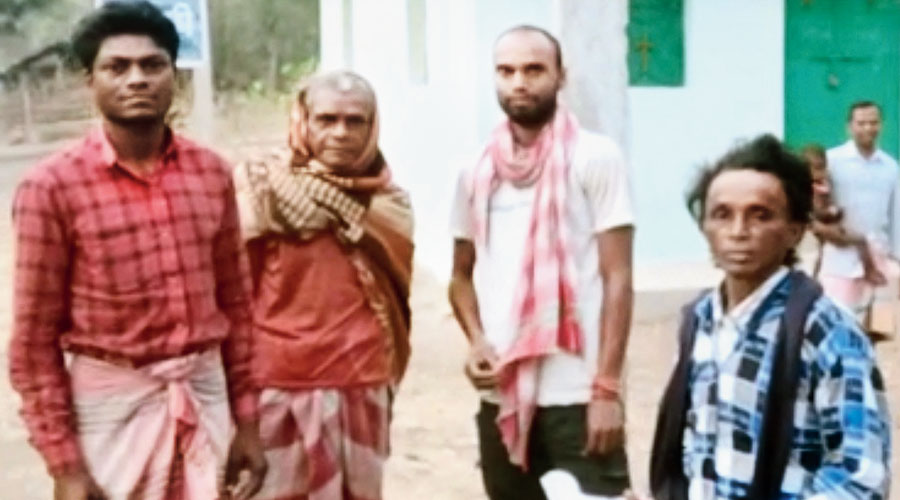 Of the tens of thousands of hapless migrant workers who had set out to walk hundreds of miles home after the lockdown was announced, one reached his village on Saturday.

Berjom Bamda Pahadiya arrived home at Amarbitha in Sahebganj district of Jharkhand on March 13 after a seven-month trudge from Delhi, 1,200km away, showing remarkable resilience for a 54-year-old in surviving odds that had felled many a younger man.

He had not a paisa on him — his labour contractor in Delhi had not only withheld his entire pay, he had snatched all his money, Pahadiya says.

He walked along the railway tracks in his torn rubber slippers, asking his way home — not too successfully perhaps, for he speaks no Hindi and only Santhali, which may partly explain why it took him so long.

He had to beg for food and water at villages on the way, again the language barrier coming in the way. He had not eaten for a fortnight, he says, when an NGO worker spotted him at a railway crossing in Dhanbad district on March 11, about 240km from his home.

Pahadiya had started his journey late, in August — far later than his peers who had left Delhi on foot in April or on Shramik Special trains in May-June.

With the help of an interpreter, he explained to this newspaper that after being robbed and kicked out by his labour contractor, he had spent months on Delhi’s pavements, surviving on food supplied at NGOs’ camps and oblivious that the government was running trains for migrants. He hadn’t the money to pay for a ticket, anyway.

Pahadiya had started off for Delhi late, too, for 54 is no age to begin a career as migrant labourer.

It was the tall promises made by the “middlemen” —local agents of metro-based labour contractors — that had persuaded this part-time farm labourer to try his luck in Delhi.

It was in February last year that Pahadiya left for Delhi on a train with about 10 others from his village. He had been offered “a good salary” —he couldn’t recall exactly how much but a neighbour said it was between Rs 10,000 and Rs 15,000 a month.

“I worked for 20-25 days before the lockdown but the middleman paid me nothing. He just arranged two meals a day and a place for me to stay,” Pahadiya said.

“After the lockdown in March, he snatched all the money I had brought from home, about Rs 7,000, as well as my belongings and Aadhaar card.”

Thus began his life of a pavement dweller till, one day in August, he decided to set off for home.

“I knew no one. I approached some people for help but was refused. So I started walking in August, begging for food and water on the way. I don’t know how many days passed,” Pahadiya said.

On March 11, a member of the NGO Roti Bank spotted him at the Mucharaidih railway crossing in Mahuda, Dhanbad district.

“One of our members informed us about a poor, hungry man who had walked all the way from Delhi. A few of our members rushed to the spot and gave him food and water,” said Suraj Kumar of Roti Bank, which provides food to the poor by raising money from donors in Dhanbad.

“We phoned the local (Mahuda) police station, but the officer-in-charge refused help.”

The NGO members decided to pool the money themselves to buy a train or bus ticket for Pahadiya to Sahebganj. They arranged a room for him to spend the rest of the day and the night.

“Some of our members uploaded his pictures on social media with an account of his ordeal. A contractor who was about to leave for Sahebganj contacted us and offered to take him to his village,” Kumar said.

“We used the money we had raised to give Pahadiya a new pair of trousers and shirt and food.”

A member of the NGO accompanied Pahadiya in the contractor’s SUV, which left Mahuda on Friday night and reached Amarbitha on Saturday morning.

Sahebganj deputy commissioner Ram Niwas Yadav promised help for Pahadiya and action against the middlemen who dupe villagers. “I shall send a probe team and, if possible, arrest the middlemen,” he said.

“I shall also provide government assistance for the duped tribal workers and strengthen the mechanism to ensure middlemen don’t lure villagers to big cities with false promises.”