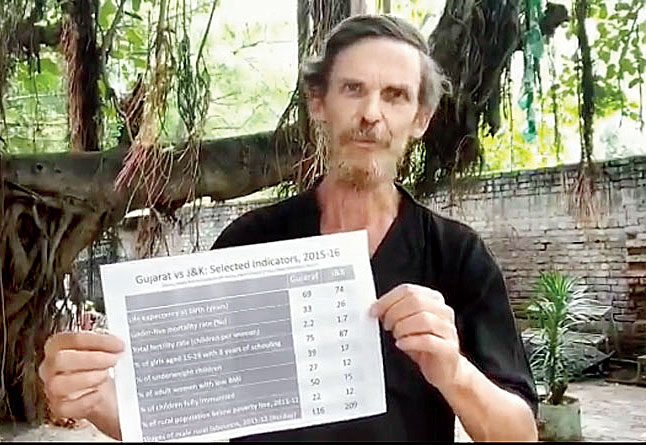 Economist Jean Dreze held up a placard at a protest rally here on Wednesday, displaying stats to contest home minister Amit Shah’s claim that Jammu and Kashmir was less developed than the rest of India.

Dreze showed how Jammu and Kashmir outscored Gujarat on the basis of a raft of development indices.

“I want to tell the people of Jammu and Kashmir what damage Articles 370 and 35A has done to the state,” Shah had told the Rajya Sabha on Monday.

“It’s because of these sections that democracy was never fully implemented and corruption increased in the state; no development could take place…. The Ayushman Bharat scheme is there but where are the hospitals? Where are the doctors and nurses? Those supporting 35A, please tell me which famous doctor will go and live there and practise? He can’t own land or a house, nor can his children vote.”

Ambedkar University student Sweta Dash tweeted a video of Dreze explaining how, “in almost any economic or social indicator, Jammu and Kashmir is way ahead of Gujarat”.

Dreze attributed this to “extensive land reforms in the 1950s” and asserted: “It is Article 370 that made these land reforms possible.”

He also cited 2011-12 figures for rural poverty and the wages of rural labourers. Kashmir scored better than Gujarat in all the indices.

Dreze told The Telegraph: “The basic point is that Jammu and Kashmir had its own Constitution, making it possible to expropriate the big landowners and redistribute their land without compensation. Under the Indian Constitution, that would not have been permitted.”

In the footnote to his essay, “Dr Ambedkar and the future of Indian democracy”, Dreze had written: “The Constitution of India could have provided for radical land reform. In the initial scheme of things, however, property was a fundamental right, making land reform very difficult.

“In contrast, extensive land reforms took place in the early 1950s in Jammu and Kashmir (J&K), where it was possible to expropriate the landlords without compensation.

“Radical land reforms in J&K were immensely popular and laid a lasting basis for a relatively prosperous and egalitarian rural economy, with very low poverty rates by Indian standards.

“Beyond land reform, government policy in J&K before 1956 (when the Constitution of J&K was ratified) was strongly influenced by Naya Kashmir, the socialist manifesto adopted by the National Conference in 1944.”

The essay is part of The Radical in Ambedkar, edited by Suraj Yengde and Anand Teltumbde, who is out on bail in the 2018 Bhima Koregaon case of an alleged conspiracy with Maoists to incite violence and target Prime Minister Narendra Modi. The book was published last year.