Poor grow poorer, and don’t even see it

Engrossed in dance of religion, caste and false nationalism put up for them by the govt, people lose sight of inequality and policies that can fight it 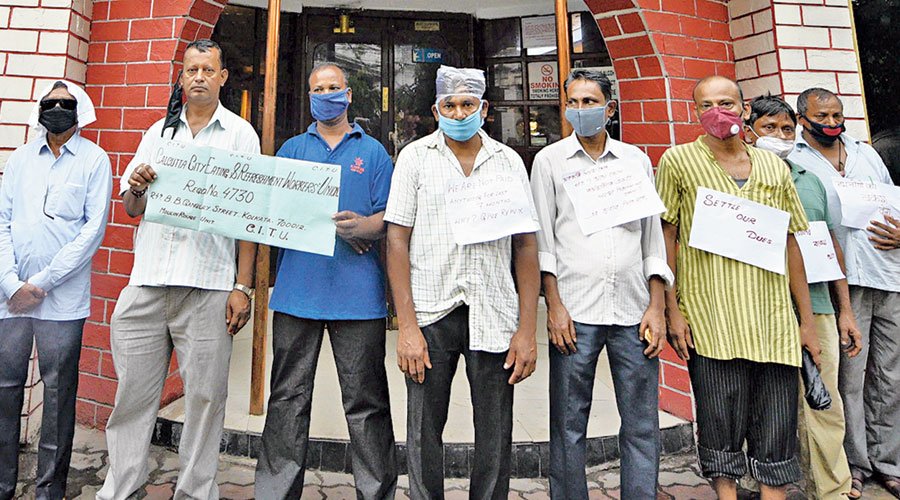 Employees of a restaurant in Calcutta protest after losing their jobs during the lockdown.
File picture
Amit Bhaduri   |   Published 01.12.20, 03:17 AM

The story goes that a Latin American dictator beholden to the CIA and the US President for his position met the President on one of his regular trips to America to request more military aid. He reported to the US President: “Sir, the economy is doing well, not the people.” This is a common enough situation, only seldom admitted by the heads of state.

It goes without saying the state of a country’s economy depends not merely on production of output but also on the well-being of the people. The link between the two is established by the distribution of output through wealth and income. The link tends to be complex when growth or stagnation is accompanied by rapid changes in the inequality of income.

Suppose a country has one dictator or emperor at the top and the rest are his subjects. The country is experiencing rapid growth in output, say 10 per cent. If all the increased output goes to the emperor, the people are no better off, the economy is richer but inequality between the top and the bottom has widened.

There can be many variations of this story. Even with negative growth the emperor can be richer and the people poorer, or the other way round depending on how output gets distributed. This is mere description with numbers although more elaborate statistics with summary formulas is a much-researched area to make this point.

However, we can see already that usual platitudes like, “growth automatically trickles down” or, “you must create wealth before you distribute it” are misleadingly unhelpful. Because, an understanding requires identifying the mechanism by which the process of growth is linked to distribution.

Information put together from diverse sources like UBS (formerly the Union Bank of Switzerland), PwC (PricewaterhouseCoopers), Forbes’ and Harun India Rich list, Bloomberg billionaire index as well as recent reports from Oxfam and the World Inequality Lab present an unambiguous picture of economic inequality rising at an unprecedented rate in India.

Rising inequality at the very top and growth were not positively correlated. Even when growth finally turned negative at minus 23.9 per cent between August 2019 and June 2020, the income of the billionaires increased by 35 per cent say, compared to 27 per cent in the US under pro-rich Trump.

The richest Indian, Mukesh Ambani, the only Asian among the richest 5 in the world, increased his net worth by 73 per cent, with Gautam Adani rising fast but a distant second. Indeed, the entire group of richest 828 Indians with individual net wealth exceeding Rs 1,000 crore increased their total wealth by 21 per cent at a time when the Indian economy had been sent into a coma due to a series of negative policy shocks like demonetisation, badly implemented GST, severest lockdown at 4-hour notice, new anti-labour laws and attempts at corporatisation of small scale agriculture. What’s going on?

Lack of jobs is the most visible link between growth and inequality. Unemployment is massive in India, but remains mostly invisible because the very poor cannot afford to be unemployed. This is why, for instance, statistics show a higher unemployment rate among the more educated who come from relatively richer backgrounds.

The very poor in the meantime have to eke out a miserable living. They are under-employed income-wise, not time-wise, often working long hours with low hourly earning.

This is the low end of India’s informal economy, gives livelihood to 93 per cent of India’s workforce and produces 45 per cent of total output. And yet, this is a black box, because employment and enterprise surveys carried out by the government at intervals of five years rely on interpolation for interim years based on indices of industrial production in the organised sector, income tax data, etc.

Negative shocks like demonetisation and pandemic lockdown hit hardest this sector’s income, but how hard can only be guessed.

The big organised industries contributed to the unemployment problem through higher mechanisation and automation under globalisation to cope with international competitiveness, requiring quality control and on-time delivery. And yet, unlike China, India continues to be a country that imports more than it exports. However, a ‘feel good’ foreign exchange position especially for the upper middle class is maintained mostly with short-term inflow of foreign portfolio investment. This has the associated fear of capital flight.

Successive governments irrespective of their political colour have managed so far not to rattle the financial sentiments of the capital market by restraining severely public spending on health, education and housing. Naturally, the poor are the hardest hit.

Adivasis and Dalits are not only among the poorest, but state violence has been unleashed especially on them in the name of development. Cheap land-based natural resources like minerals, forests, water bodies, mountains and sea shores have been acquired from them by the government, and handed over to the large private corporations mostly to incentivise them to invest.

Only a tiny fraction of that dispossessed population can be absorbed in modern industry because of the relative small size of the total market. We buy more than we sell in the foreign market, while vastly increased labour productivity through mechanisation in a sluggish domestic market has killed rather than creating more jobs. Technology has been working against the poor people. Big industry requires more natural resource per unit of output and puts pressure for the next round of dispossession along with further deterioration of environment.

Joblessness, environmental degradation of city and countryside, and a swelling informal sector are intertwined with growth. However, even when growth falters, the show can still be kept going!

The corporate sector quickly learns it can accumulate wealth more speedily because the government will hand them over land and other natural resources very cheap if they manage to be politically on the right side of the government. Corporate donations flow uninterrupted, say, through electoral bonds, as production becomes less important than acquisition of natural resources plus the usual tax breaks and anti-labour laws.

Corporate wealth increases leap forward, leading to an artificial stock market boom as the rich invest a big part of their income in stocks. Higher stock values also have more collateral value, justifying bank loans whether paid back or not, which leads to further rise in stock price.

Inequality grows along with the wealth of the already wealthy. The lure of quick capital gains can even turn into a bullish mania despite even negative growth in the real economy. Apart from occasional relief, democratic government with its cosiness to selected corporates hopes to ride the storms of election with the money power, a pliable media, academia and other institutions falling in line.

Growing inequality blends seamlessly into this tale of democratic development.

The British empiricist philosopher David Hume had argued long ago, you cannot get from an “ought” to an “is” proposition.

The government has its own reasons. When money power, biased institutions and a highly pliable media combine to create a thick fog, public visibility diminishes, and ghosts appear in the name of religion, caste, an imagined history of tradition and false nationalism.

In the ghostly dance that follows, people easily lose their sanity. They lose sight of democratic, economic and social policies that might help them. Instead they become engrossed in the phantom dance that has been put on for them.

Digression from the real is the only game in town played by the dictator for his people.

Amit Bhaduri is an economist. In January this year, Bhaduri gave up his status as professor emeritus at JNU in protest against the throttling of dissent on the campus