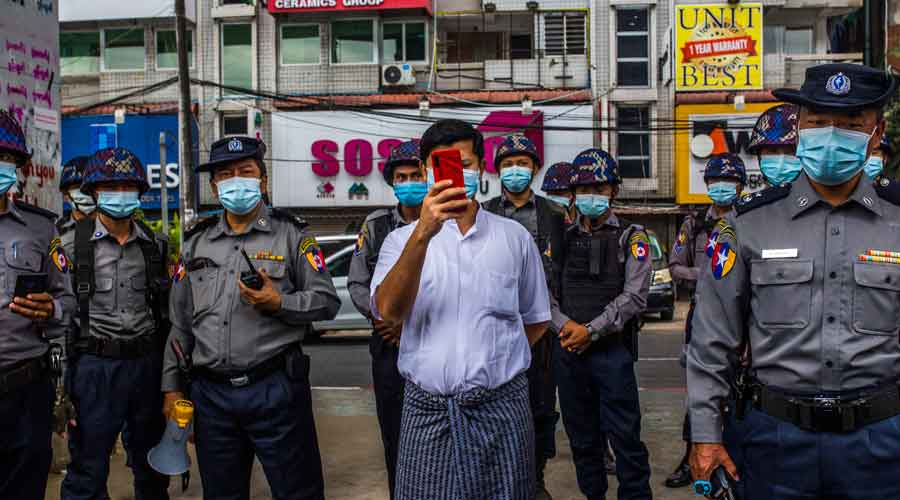 In the first official comment on the Indian defence attaché attending the Myanmar Armed Forces Day parade in Naypyitaw on March 27 — a day that saw the Myanmarese army shoot down 114 pro-democracy protesters — the external affairs ministry on Friday described India’s presence at the event as a “regular diplomatic exercise’’.

Asked how India’s participation at the event is consistent with New Delhi’s stated position that democracy must be restored in Myanmar, external affairs ministry spokesman Arindam Bagchi said at the weekly news conference: “We have a functioning embassy in Myanmar. Our ambassador, defence attaché and other diplomatic officials continue to discharge their regular diplomatic responsibilities. Nothing more should be read into the defence attaché attending this event.’’

India, according to Nikkei Asia, was among the eight countries which sent representatives to the annual parade; the others being Russia, China, Pakistan, Bangladesh, Vietnam, Laos and Thailand. India’s presence was particularly conspicuous because the country prides itself for being the world’s largest democracy.

India’s decision to participate in the parade had drawn criticism from the pro-democracy movement in Myanmar which tweeted a condemnation from a verified handle: “Indian embassy in Myanmar sent their military attaché to the military junta’s ‘armed forces day’ ceremony. India is one of the greatest democracies in the world. Why do you shake hands with the generals whose hands are soaked with our blood? @DrSJaishankar @MEAIndia @PMOIndia’’

Indian embassy in Myanmar sent their military attaché to the military junta’s ‘armed forces day’ ceremony. India is one of the greatest democracies in the world. Why do you shake hands with the generals whose hands are soaked with our blood? @DrSJaishankar @MEAIndia @PMOIndia

At the start of the military coup in Myanmar on February 1, India had expressed deep concern and called for the rule of law and the democratic process to be restored. On Friday again, the spokesman while responding to questions on the crackdown on pro-democracy protests, said: “We condemn any use of violence. We believe the rule of law should prevail. We stand for the restoration of democracy in Myanmar. We have urged the release of political prisoners and supported any attempts at resolving the current situation including through the efforts of Asean (Association of Southeast Asian Nations). We remain engaged on this issue with our international interlocutors and at the UNSC (United Nations Security Council) in an effort to play a balanced and constructive role.’’

Asean, of which Myanmar is a part, is divided on the issue but there is a move within to host a special summit to facilitate dialogue with the junta. China, too, is backing this initiative. India, which currently has a seat in the UNSC as a non-permanent member, has been advocating restraint in the face of a push for UN sanctions on Myanmar that was blocked by China.

India, which had been deepening its relationship with the Myanmar government in recent years, is taking a more calibrated position on the coup than the West’s black-and-white stance; factoring in the China angle. On the refugee situation too, the Narendra Modi government has asked bordering states in the Northeast to block the inflow of refugees from Myanmar, drawing widespread criticism.

While some have still managed to come through from the porous borders and are being pushed out, the central and state governments claim that those injured are being given medical assistance. However, when asked if India has an estimate on how many Myanmar nationals have entered India and what New Delhi’s stance is, Bagchi only said: “We are dealing with it as per our laws and humanitarian considerations.’’