More than 1,500 people have died in India in the past three years, and 300 of the animals have been killed in retaliation 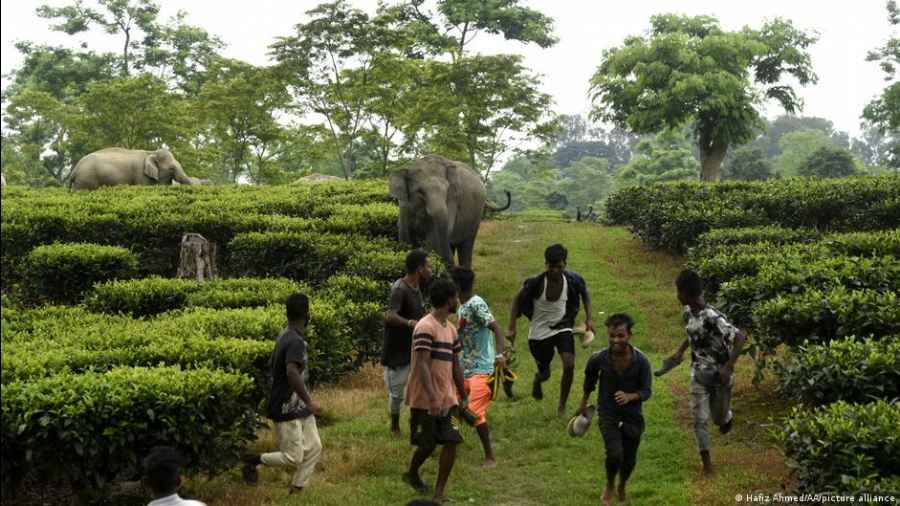 Elephant-human conflicts have been on the rise in India as a result of habitat loss, and experts say such conflicts could get worse unless forested areas are protected and migration corridors restored.

More than 1,500 people have died in elephant attacks in the country in the past three years, with 300 of the animals killed in retaliation, according to government figures, as authorities seek long-term solutions to minimize such incidents.

By various estimates, including those provide by the Wildlife Trust of India and the IUCN SSC Asian Elephant Specialist Group, India accounts for 70-80% of all recorded human deaths caused by elephants across Asia.

"With competition for resources, human-animal conflicts are increasing, and it is very unfortunate that around 500 people are killed in elephant attacks and 100 jumbos are killed in retaliation annually," Environment Minister Bhupender Yadav said last week at a press conference held to mark World Elephant Day.

In most cases, compensation was provided to local communities for loss of their property and life caused by wild elephants.

India is home to the world's largest population of Asian elephants and about 29,000 elephants remain in the wild, environmentalists say.

Elephant forest habitats are being eroded by agriculture and infrastructure.

Nearly 40% of elephant reserves are vulnerable, as they are not within protected parks and sanctuaries. Also, as elephants migrate, they are offered no specific legal protection.

In the eastern state of Odisha alone, more than 700 elephants have died since 2012 even as the state government has adopted a raft of measures to reduce such deaths.

Elephants are expected to live for up to 50 years but their survival depends upon regular migration over large distances to search for food, water, and social and reproductive partners.

Conservationists says elephants can benefit ecosystems in many ways, including by dispersing seeds, spreading their manure and creating waterholes for the benefit of other species.

"Problems arise when these giants can no longer migrate due to man-made disturbances; when their corridors are destroyed by open-cast mining, canals and other constructions, highways and railway tracks," conservationist and wildlife campaigner Belinda Wright told DW.

Wright, who is the founder and executive director of the Wildlife Protection Society of India,pointed out that elephants often have to turn to other food sources such as crops to survive, which in turn pits them against local farmers and villagers.

"Left alone, elephants do not usually attack people. When elephants enter agricultural fields, or go near human habitation, they are inevitably surrounded by mobs of people. They are intelligent, powerful animals and eventually they will retaliate, again and again," Wright said.

Habitat fragmentation fuels the potential for human-elephant conflicts, as roads and farms surrounding fragmented feeding grounds are more prone to such confrontations.

The northeastern state of Assam, for instance, which is home to more than 5,700 Asian elephants, has seen a steady depletion of forest cover over the years.

Kushal Konwar Sarma is referred to as the "elephant doctor." He has worked with pachyderms — very large mammals with thick skin, such as elephants, rhinos and hippos — for over three decades.

Sarma told DW that preventive measures like chili fences, planting lemon trees instead of electric fences, using smoke, as well as growing long-rice varieties, have all been adopted with varying degrees of success.

"It is important to involve the community when it comes to finding solutions towards man-elephant conflict and raising awareness regarding the importance of preservation and protection of elephants," Sarma said.

"The human population has increased, and elephants are not getting enough space," Sarma added.

What's more, it was discovered that many rural communities living in protected areas of forests move closer to permanent water sources during dry periods to ensure stable water access for their household needs, crops and livestock.

Competition for increasingly scarce water sources and other resources during or after droughts increases the risk of conflict between elephants and humans.

A recent study by the Wildlife Institute of India (WII) also showed that the presence of natural barriers such as rivers, or human-made barriers such as highways, concrete walls and electric fences, "can also result in genetic differentiation among populations."

Conservationists and wildlife campaigners have listed more than 100 corridors throughout the country that are critical to the long-term survival of elephants, but many have some form of human-caused disturbance.

"Elephant herds are known to migrate across 350-500 kilometers (200-300 miles) annually but increasingly fragmented landscapes are driving the giant mammals more frequently into human-dominated areas," she said.

The largest number of corridors are located in northern West Bengal, which has one corridor for every 150 kilometers of available elephant habitat, resulting in heightened human-animal conflict and an average of about 50 human deaths every year.

Among states, West Bengal has the largest number of corridors, with 14, followed by Tamil Nadu, with 13, and Uttarakhand (11).

Given the increase in human-elephant conflicts, the government has embarked on finding a long-term solution by revisiting the elephant corridors and have finished more than 50% of the task involving key stakeholders.

"It is going to take knowledge, political support and perhaps some compromise to find a way to allow for the space that these incomparable animals need to survive, and, better still, flourish, in this ever-changing world," Wright said.