Advertisement
Home / India / China yet to relent on Pangong: Sources
'Changes cosmetic, only some boats pulled back'

China yet to relent on Pangong: Sources

Military veterans and security officials apprehensive about the disengagement process 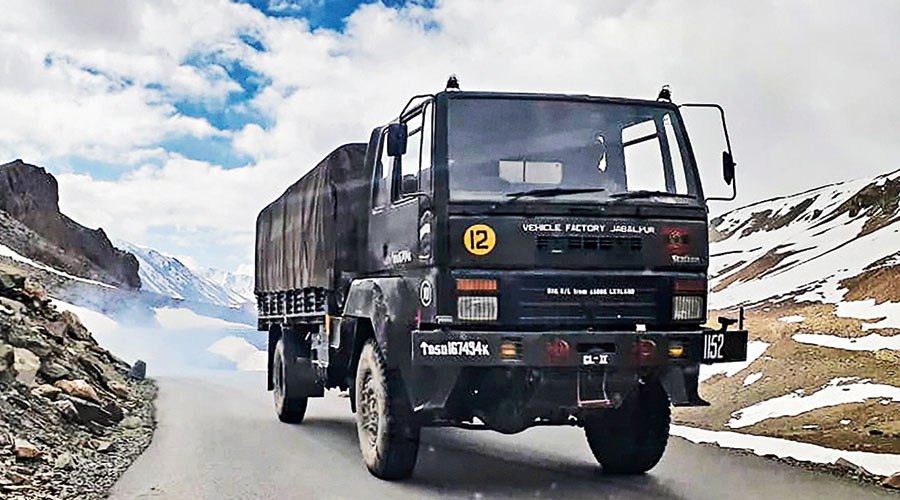 The ground situation at the Pangong Lake continues to simmer with the Chinese army showing no “intent” to retreat from its position 8km inside the India-claimed line, sources in the security establishment said.

“The ground situation at the Pangong Lake in eastern Ladakh remains the same despite the latest round of disengagement in the Galwan Valley and Hot Springs,” an intelligence official told The Telegraph.

“The Chinese continue to occupy the area inside Indian territory at Finger 4 where they had dug in since May. The only visible change is that they have pulled back some boats from the lake.”

He added: “But that is only cosmetic. They continue to remain at the Finger 4 ridgeline and control the heights where they have deployed both men and machine. They have fortified bunkers on the shore of the lake and built several posts and observation towers.”

Defence ministry sources said the Depsang plains near Daulat Beg Oldi in northern Ladakh were another standoff site where there was no sign of any visible disengagement.

In the Pangong Lake area, India claims the territory till Finger 8 but the Chinese have advanced 8km up to Finger 4 from their erstwhile position at Finger 8.

The current standoff had started at the Pangong Lake, with a fists-and-stones clash between the two armies on May 5, before snowballing into a violent face-off on June 15 at Patrolling Point 14 in the Galwan Valley that killed 20 Indian soldiers.

From Monday, the two sides began to disengage from several friction points by creating “buffer zones” between the two armies.

Defence ministry sources said some progress had been made at PP14 and Hot Springs where both sides are said to have moved back by 1.5km.

He added: “The Pangong Tso (Lake) and Depsang are the two points where the Chinese have so far shown no intent to back off. These two friction points are likely to figure prominently in the next round of corps commander-level talks.”

Military veterans and security officials are apprehensive about the disengagement process, which appears to require the Indian troops to match China’s pullback by moving back from India-claimed territory and create buffer zones. This, they say, amounts to further territory loss for India and a huge disadvantage tactically for its army.

Former national security adviser Shivshankar Menon too questioned this “dangerous pattern” of the disengagement process in an interview to The Hindu.

“Well, I think it’s actually dangerous to speak of disengagement, pullback, withdrawal, buffer zones. These suggest that we are withdrawing from territory which we have controlled consistently, and that we were part of the problem to start with. China stopped us from doing our normal patrol in these areas, which we have done for years. The Chinese have stopped us from doing so at several points since April,” he said.

“So, frankly, if we are withdrawing from territory that we have controlled, I don’t understand what is happening here. As I said, we talk about the fog of war; this is the fog of peace.”