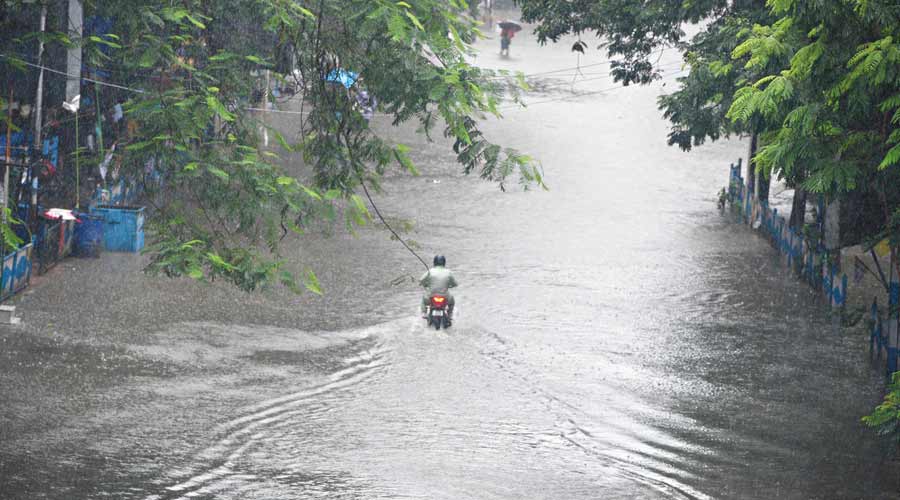 Heavy rains lashed Kerala, especially the south and central regions on Saturday, causing water-logging in several areas and leaving many rivers in spate, as the weathermen sounded 'red alert' predicting extremely heavy rainfall in five districts of the state.

According to the latest update of the Indian Meteorological Department, the 'Red Alert' was sounded for Pathanamthitta, Kottayam, Ernakulam, Idukki, and Thrissur districts.

Chief Minister Pinarayi Vijayan said the India Meteorological Department has warned of widespread heavy rains in the state due to the Low Pressure area formed over the Arabian Sea.

Appealing to the people of the state to keep extra vigil in the next 24 hour, he said in a Facebook post that the rains already hit the south and central districts and it would intensify in the northern districts also by the evening as per the weather forecast.

The water level in some rivers is expected to rise and shutters of certain dams are likely to be opened, he said adding that those living in its catchment areas should be ready to follow the instructions of authorities.

Meanwhile, two children had a miraculous escape after a portion of the wall of their house collapsed in incessant rains on Friday night at Chempakamangalam in the capital district where rains has been battering the city and rural areas alike since last night.

The wall collapsed on the bed, where the children were asleep, but they escaped with minor injuries, family sources said.

District Collector Navjot Khosa advised people to avoid visiting tourist places and going near rivers and other water bodies in view of heavy rains in Thiruvananthapuram.

Four shutters of Neyyar Dam here were raised by a total of 240 cm in view of the rising water level, the authorities said adding that the shutters of Aruvikkara Dam would be raised to 350 cm from the present 310 cm in the afternoon.

The Thrissur district administration urged people living in low-lying and other disaster-prone areas and on the banks of rivers to move to safer places as per the instructions received from the authorities.

Fishing boats are prohibited from venturing into the sea, they added.

Revenue Minister K Rajan called a meeting of district collectors via online this afternoon to coordinate with the disaster management programmes and take stock of the damage caused by the rains across the state.

Health Minister Veena George convened a virtual meeting of MLAs at the collectorate in Pathanamthitta, the district which had witnessed widespread destruction during the massive floods in 2018.

The water level is rising steadily in many rivers including Meenachal and Manimala.