The newly created Union Territory recorded 42 Covid-19 cases, the highest in a day yet 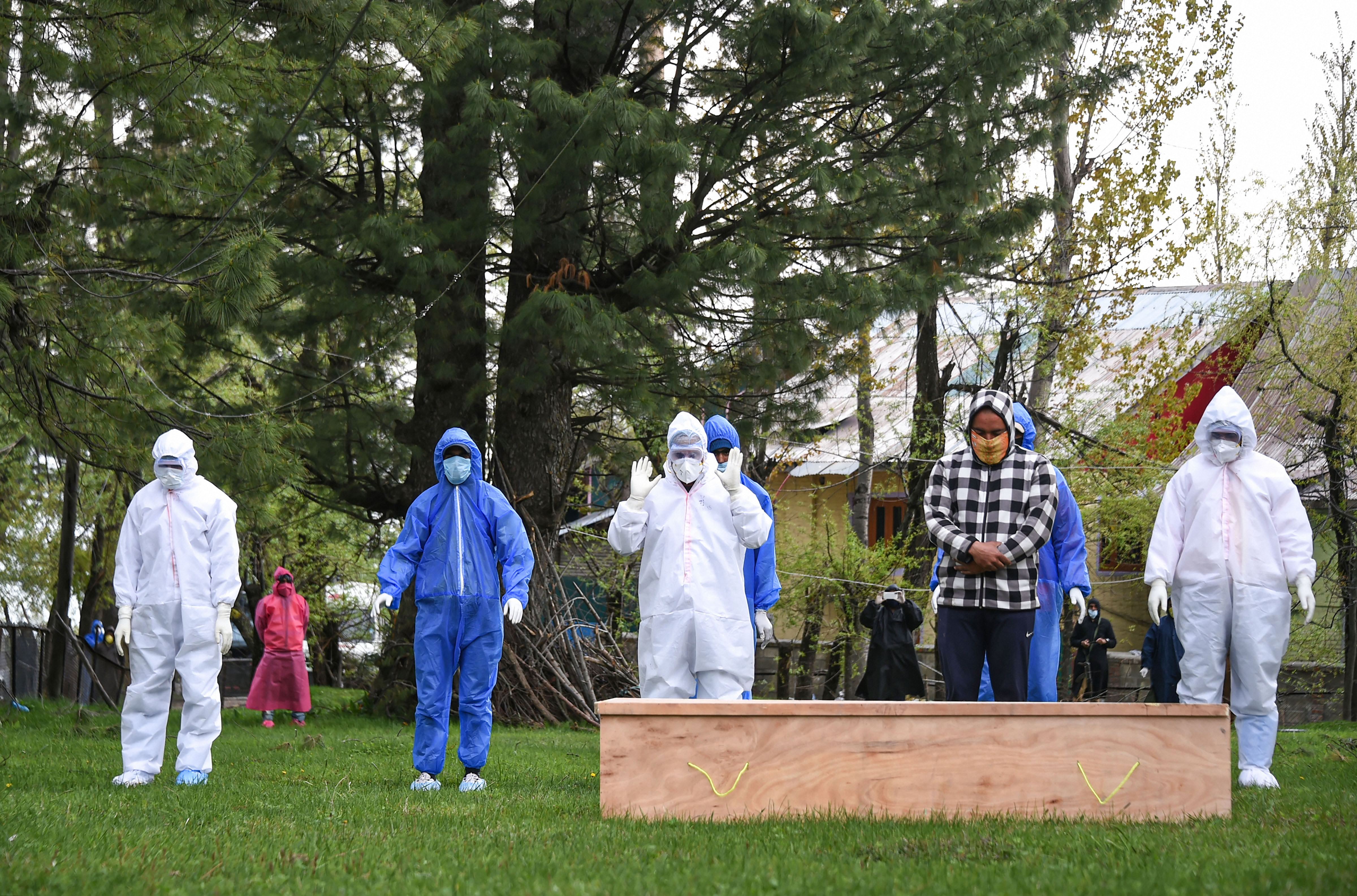 Villagers offer funeral prayers in front of the mortal remains of a 72-year-old man who died due to coronavirus at his ancestral graveyard during a nationwide lockdown, at Tangmarg in Baramulla District of North Kashmir on Saturday.
(PTI)
Muzaffar Raina   |   Srinagar   |   Published 26.04.20, 11:05 PM

The Jammu and Kashmir administration has renamed its public health engineering and irrigation and flood control (PHE I-FC) department as “Jal Shakti Department”, pressing ahead with the Union Territory’s full integration with the rest of the country, pandemic or no pandemic.

The move, by the administration led by lieutenant-governor G.C. Murmu, is in line with the formation of the Jal Shakti ministry at the Centre last year that saw the ministries of water resources and drinking water and sanitation being merged.

The order— the latest in a series of decisions since the outbreak of the pandemic — was made public on Saturday when the newly created Union Territory recorded 42 Covid-19 cases, the highest in a day yet.

The total number of cases rose by another 27 on Sunday, taking the count of infected people to 523. Six people have died so far, five in the Valley and one in Jammu.

Radio jockey Sardar Nasir Ali Khan quipped whether the head of the new department would be called “Shaktiman”.

The order came months after the state lost its special status and was split into two Union Territories, the other being Ladakh.

Following an uproar, the Centre amended the order a few days later, reserving all jobs for domicile residents.

Earlier, in October, the Centre had renamed the Chenaani-Nasheri tunnel after Syama Prasad Mookerjee, founder of the ruling BJP’s forerunner Jana Sangh. The 9.2km-long tunnel in Jammu and Kashmir is the longest in the country.

The government also appears to have used the pandemic to intensify its crackdown on dissent. Police this week booked two journalists under the stringent Unlawful Activities Prevention Act for alleged anti-national social media posts,while another was booked for an alleged fake news.

Zeeshan had said the two localities had not recorded even a single Covid-19 case. “Will the govt reveal the reason for declaring Bhatindi and Gujjar Nagar as Red Zones? Were the guidelines issued by @MoHFW_INDIA properly followed, or is it because of a Muslim majority population,” he had tweeted.

The response from the official handle of the deputy commissioner said the “kind of words that U have used in this tweet r inflammatory in nature & liable for penal action”.

It claimed there were 10 positive cases from the “said red zones” but sources said they were from adjoining Sunjwan.

Following an outcry, the government on Saturday eased restrictions in several pockets in these areas.