Chief Justice of India Dipak Misra is the sixth Indian judge to face an impeachment motion but technically, none has so far been removed through such a procedure. 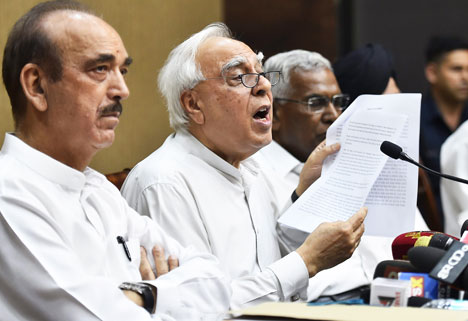 New Delhi: Chief Justice of India Dipak Misra is the sixth Indian judge to face an impeachment motion but technically, none has so far been removed through such a procedure.

The five judges who had faced impeachment motions earlier had either resigned before the process was completed, or their removal failed to receive Parliament's sanction.

Justice Misra, who retires on October 2, also appears likely to escape the ignominy since the Opposition is far short of the numbers in the Lok Sabha.

Justice Soumitra Sen of Calcutta High Court had come the closest to be impeached. He had been accused of misappropriating a sum of Rs 32 lakh in 1993 as a Calcutta High Court-appointed receiver in a lawsuit between Steel Authority of India Limited and Shipping Corporation of India.

A legal opinion obtained by the law ministry endorsed the move. In 2009, some 58 Rajya Sabha members moved an impeachment motion.

The expert committee set up by then Rajya Sabha Chairperson Hamid Ansari - made up of Justice B. Sudershan Reddy of the apex court, Justice Mukul Mudgal (chief justice of Punjab and Haryana High Court) and jurist Fali S. Nariman - found the charges true.

After the impeachment debate in the Rajya Sabha, Justice Sen was given an opportunity to defend himself through his counsel Subash Bhattacharya, who claimed his client was innocent.

The Rajya Sabha passed the impeachment motion by 189-17 on August 18, 2011, but Justice Sen pre-empted his impeachment by resigning on September 1 that year, before the Lok Sabha could take up the motion on September 5 and 6.

"Since the Rajya Sabha has decided in its wisdom that I should not continue as a judge, I have decided not to go to the Lok Sabha, and put in my papers instead," the resignation letter said. The Lok Sabha dropped the impeachment proceedings.

Justice V. Ramaswami was the only Supreme Court judge to face an impeachment motion before Justice Misra. In 1990, several media outlets had reported about his allegedly ostentatious expenditures on his official residence during his tenure as Punjab and Haryana chief justice.

The BJP and the Left moved a notice in the Lok Sabha seeking his removal from office. A committee formed by Speaker Rabi Ray found him guilty on 11 of 14 counts.

The impeachment motion was placed in the House on May 10, 1993. Lawyer and Congress politician Kapil Sibal appeared for Justice Ramaswami. The Congress abstained from voting and only 196 votes were cast, which was less than two-thirds of the members present, causing the motion to be dropped on technical grounds.

A challenge to the outcome in the Supreme Court was defeated.

Justice P.D. Dinakaran, the Sikkim chief justice against whom the then Rajya Sabha Chairperson had set up a corruption probe in 2011, resigned before impeachment proceedings started.

In December 2015, a group of 58 Rajya Sabha members moved an impeachment notice against Justice J.B. Pardiwala of Gujarat High Court for certain remarks he had made on Dalit and tribal reservations. But the judge promptly withdrew his remarks.

Attempts were made twice in December 2016 and May 2017 to initiate impeachment proceedings against Justice C.V. Nagarjuna Reddy of Andhra Pradesh and Telangana High Court. Both attempts failed for want of the required number of signatures.

Excerpts from a statement issued by seven Opposition parties on the motion to impeach Chief Justice of India. Italicised sentences are annotations by this newspaper

• The first charge relates to the conspiracy to pay illegal gratification by persons in relation to the Prasad Education Trust case and the manner in which the case was dealt with by the Chief Justice. (The Lucknow-based education trust, which was denied permission to run a medical college, had moved court and won an order in its favour. The CBI had launched a probe after allegations of collusion between the trust and a section of the judiciary.)
• It is on record that the CBI has registered an FIR. There are several recorded conversations between middlemen, including a retired judge of Orissa High Court, excerpts of transcripts of which are set out in the articles of charge. References to the Chief  Justice by innuendo in these conversations are evident. The denial of permission to the CBI to register an FIR against Justice Narayan Shukla of Allahabad High Court, when the CBI shared incriminating information with the Chief Justice, was itself an act of misbehaviour. All this requires a thorough investigation.
• The second charge relates to the Chief Justice having dealt on the administrative as well as on the judicial side with a writ petition which sought an investigation into the matter of Prasad Education Trust, in which he too was likely to fall within the scope of investigation. The practice in the Supreme Court is that when the Chief Justice is in a Constitution Bench, and matters are to be listed, requests for listing are made before the first puisne judge (a judge in a superior court but ranked below the Chief Justice). This is an age-old practice.
• On November 9, 2017, when a writ petition was mentioned before Justice Chelameswar at 10.30am since the Chief Justice was sitting in a Constitution Bench, the same was directed to be listed later the same day. When the matter was taken up, a note dated November 6, 2017, was placed before the judges hearing the matter by an official of the Registry.
• This is the basis of the third charge alleging that the note of 6th November, brought to the attention of Justice Chelameswar on 9th November as the matter was taken up, was antedated. The charge of antedating is by all accounts a very serious charge.
• The fourth charge relates to the Chief Justice having acquired land when he was an advocate by giving an affidavit which was found to be false. Further, despite the orders of the ADM cancelling the allotment in 1985, the Chief Justice surrendered the land only in 2012 after he was elevated to the Supreme Court.
• The fifth charge relates to the abuse of exercise of power by the Chief Justice in choosing to send sensitive matters to particular benches by misusing his authority as Master of the Roster with the likely intent to influence the outcome.