Hanging solar fences to save jumbos in Odisha 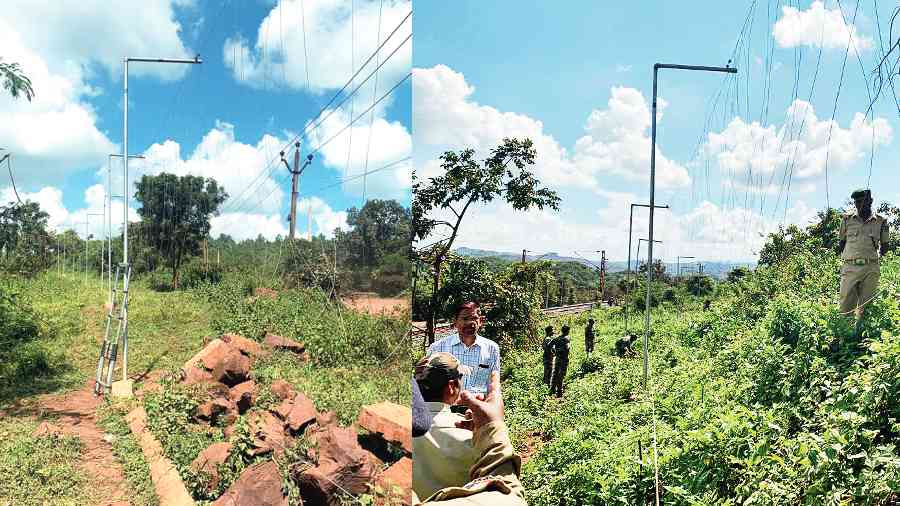 The forest department of Odisha has installed hanging solar fences along railway tracks as an experiment in a bid to prevent elephants from being mowed down by trains.

The solar fence will not harm animals but stop them from moving further ahead and force them to retreat.

The forest department has used this technique in the Keonjhar district. It has installed hanging solar fences for 800 metres along the railway tracks at Joda, the mineral hub of the district. It was inaugurated on Saturday.

Divisional forest officer (DFO), Keonjhar, D.D. Hanumant told The Telegraph: “This hanging solar fencing is the first of its kind being introduced by the forest department under the Management of Elephant Corridor scheme. It has come up at a cost of Rs 10 lakh at Jalahari in Joda. The solar fencing put up on electric poles is around 15 feet high and remains above 3.5 feet to 4 feet high from the ground level covering the railway track from both sides, depending on the ground level.”

He said: “When an elephant comes in contact with the fence, it will receive an electric shock of 11 volts for three microseconds. Getting the electricity, the elephant will be perturbed and stop from crossing the railway track at that point. We are hopeful this will help in reducing the number of accidents of elephants on the railway track. Besides the elephants, other animals will also not come near the track. But our prime focus is to save the elephants.”

Officials at the inauguration of the solar fencing

The DFO said: “Our officers will constantly monitor the movements of the elephants using various modern techniques. At any point of emergency, we will coordinate with railways and save the elephants.”

The forest department has come up with the idea of installing a solar fence following the mowing down of a female elephant and two calves in May last year by a goods train in the Joda area of Keonjhar. Nearly a herd of 22 elephants were crossing the track when the accident took place.

During the last 10 years, nearly 30 elephants died on railway tracks. Keonjhar district reports the highest number of elephant deaths on the railway track, prompting the forest officials to experiment with the idea of installing a solar fence in Joda on a priority basis.

According to the state government reports, at least 80 elephants die every year in the state which has lost as many as 935 of these pachyderms between 2011-12 and 2021-22. The highest number of elephant deaths (86) was reported in 2021.

Poachers killed as many as 48 elephants while 119 died of natural causes. The reasons for the death of another 131 elephants are yet to be ascertained.

Most of the electrocutions have been taking place in forested areas, near roadsides and on railway tracks. “We are aware of the issue and in touch with the railway on how to tackle this,” said an official.

In many areas, where elephant raids have been taking place and people are losing their crops and houses, vengeful villagers have been killing elephants by pulling down high voltage overhead wires and putting them in their way, said officials.