The matter will be taken up by the court again Wednesday\ 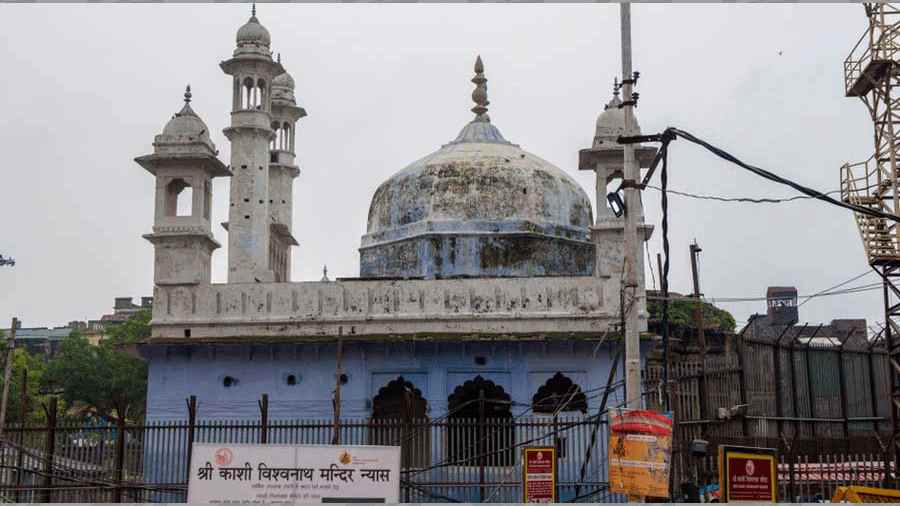 The mosque management committee has approached the court for the appointment of another advocate as the court commissioner, accusing Mishra of favouring Hindu petitioners in his court-mandated task.
File Picture
Our Bureau, PTI   |   Varanasi   |   Published 10.05.22, 10:00 PM

The hearing on changing the court commissioner appointed to conduct a video survey of the Shringar Gauri temple-Gyanvapi mosque complex here remained inconclusive on Tuesday and would continue at Varanasi district court the next day.

Madan Mohan Yadav, the lawyer of Hindu petitioners who have requested they be allowed to perform daily worship of idols of some deities located on the mosque's western wall, said both sides presented their arguments before Civil Judge (Senior Division) Ravi Kumar Diwakar.

Abhay Nath Yadav, who is representing the Gyanvapi mosque management committee (Anjuman Intezamiya Masajid Committee), said the arguments over his plea for removing advocate Ajay Kumar Mishra as the court commissioner for the survey went on for two hours, but remained inconclusive.

The matter will be taken up by the court again Wednesday, he said.

The Hindu side prayed to the court for a videography and survey inside the mosque area on which the mosque committee sought time till Wednesday to present its objection, Madan Mohan Yadav said.

Mishra, who was appointed by the court as its commissioner, has previously pleaded for more time to complete the task.

Judge Diwakar had ordered the survey earlier on a plea by five women seeking the court's permission to perform daily worship of idols of some deities located on the western wall of the mosque.

The mosque management committee has approached the court for the appointment of another advocate as the court commissioner, accusing Mishra of favouring Hindu petitioners in his court-mandated task.

Mishra and lawyers representing both the Hindu and Muslim sides had on Saturday gone inside the Gyanvapi-Shringar Gauri temple complex.

Despite waiting for nearly two hours inside the complex, they had not been able to accomplish the work and had to come out of the complex.

Counsel Vishnu Jain, representing the five women petitioners, too had gone inside the complex with Mishra on Saturday.

After emerging from there, he had told reporters that men present inside the mosque did not allow the survey team to enter the mosque area to conduct the survey. He had also accused the district administration of not helping the court commissioner's team in entering the mosque.

Jain had said they would apprise the court of the opposition to the court-mandated task of the mosque complex and seek a specific order to carry out the videography and survey of the Gyanvapi mosque.

The videography survey of the mosque was ordered earlier by Judge Diwakar on a plea by women petitioners Rakhi Singh, Laxmi Devi, Sita Sahu and others seeking permission to perform daily worship of deities Shringar Gauri, Lord Ganesha, Lord Hanuman and Nandi whose idols are located on the outer wall of the Gyanvapi mosque.

They had moved the court with their plea on April 18, 2021, and had also sought the court's order to stop the opponents from causing any damage to the idols.

The counsel for the mosque management committee had contended that the court had not given any order to conduct the videography inside the mosque but to do it only till the 'chabutra' (courtyard) outside the barricades enclosing the mosque area.

The court commissioner had on Friday conducted an inconclusive survey of some areas outside Gyanvapi Masjid in the Gyanvapi-Shringar Gauri complex amid brief sloganeering by two sides.