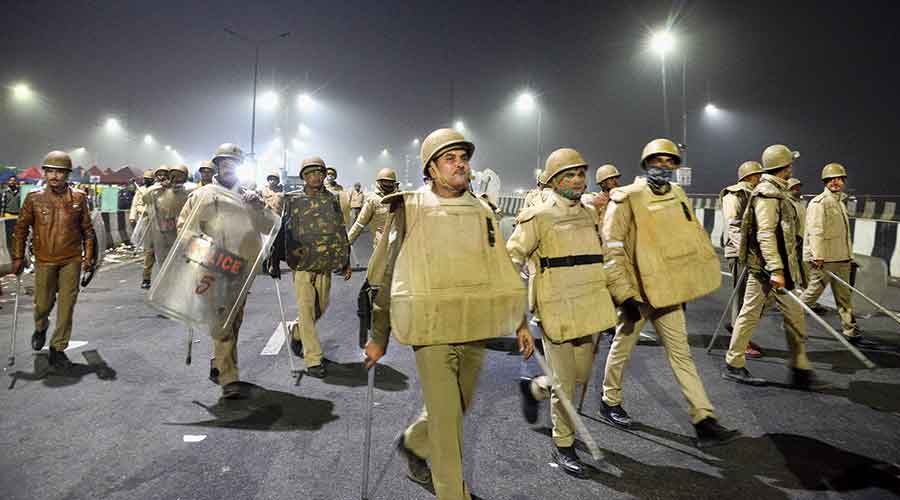 The government’s apparent attempt to evict farmers protesting on Delhi’s borders and crack down on their leaders seemed on Thursday night to have injected fresh energy into the movement, which had appeared demoralised after the turn of events on Republic Day.

Overnight, thousands of farmers from Uttar Pradesh, Haryana and Punjab set out for the Ghazipur, Singhu and Tikri borders after emergency village meetings.

Earlier in the day, huge police contingents had been deployed at all three sites as the government tried to strike at a time public support to the farmers seemed to have eroded because of the chaos in the tractor rally.

At Singhu, the approach road from Delhi was barricaded and earthmovers deployed on the road from Haryana amid speculation that the roads would be dug up. This would cut the supply lines of food and other essentials, and also make it difficult for the protesters to take turns at the site before returning home when a new batch arrives.

But it was at Ghazipur that the administration moved first, snapping water and power lines, removing the makeshift toilets and ordering the farmers to vacate the site by Thursday night.

Rakesh Tikait of the Bharatiya Kisan Union, who has become the face of the protest at Ghazipur, said he would rather commit suicide than end the dharna without the repeal of the three new farm laws.

“No violence has taken place at the Ghazipur border but still the Uttar Pradesh government is resorting to a policy of suppression,” he said, breaking down on camera as he accused the BJP regime of being bent on destroying farmers.

The farmers had for two months been protesting peacefully on the highway, braving dangerously cold weather, seeking repeal of the farm laws that they believe will leave them at the mercy of big corporates and reduce them to labourers on their own lands. At least 150 farmers had died in the protests. But on Republic Day, during the tractor rally some participants breached the agreed route and schedule and clashed with the police. They also breached the Red Fort, where a Sikh pennant and a peasant union flag were hoisted from an empty flagpole.

The turn of events left the farmers and their leaders upset and on the backfoot.

But as the government appeared to be rolling up its sleeves to force out the protesters, the Samyukta Kisan Morcha declared it would not be cowed down and appealed to farmers from Punjab, Haryana and Uttar Pradesh to join in larger numbers.

By night, visuals from Tikait’s village of Sisauli in Muzaffarnagar showed a crowd of farmers converging and shouting slogans against the BJP. Late-night emergency khaps were held in Haryana’s villages. And overnight, farmers began leaving for Delhi. Even before this late mobilisation, union leaders at Tikri, which was relatively free of tension on Thursday, had expected 20,000 more tractors to join them.

Lookout circulars had been issued against the farmers and their leaders, and the leaders were served with notices asking why there should not be action against them over the chaos at the tractor rally. The Morcha leaders in turn questioned the police delay in acting against those actually responsible for the violence. They had earlier blamed actor Deep Sidhu, who did a Facebook Live from the Red Fort, of acting as an agent of the government and instigating the trouble.

Since the use of force against farmers who have decided not to retaliate to any provocation could once again turn opinion in their favour, the administrations in Uttar Pradesh and Haryana had through Thursday tried to make it difficult for them to continue the protest.

At most sites, from the largest at Singhu on G.T. Karnal Road to a comparatively tiny one at Palwal, people claiming to be residents turned up shouting slogans against the farmers and demanding action against them for the chaos on Republic Day.

The Morcha said: “RSS-BJP-sponsored people came to Ghazipur site, and (the farmer) leaders explained to the public to remain peaceful against the government (plans) to sabotage the farmers’ struggle.”

Police in Haryana and Uttar Pradesh, both BJP-ruled, were busy through the past 24 hours evicting the local-level protests that have mushroomed across the two states in support of the demand for the repeal of the three laws.

Jai Kisan Andolan leader Yogendra Yadav’s apartment block in East Delhi was targeted by a group of protesters on Thursday evening. Yadav also alleged that his phone number had been made public and he was receiving threat calls.