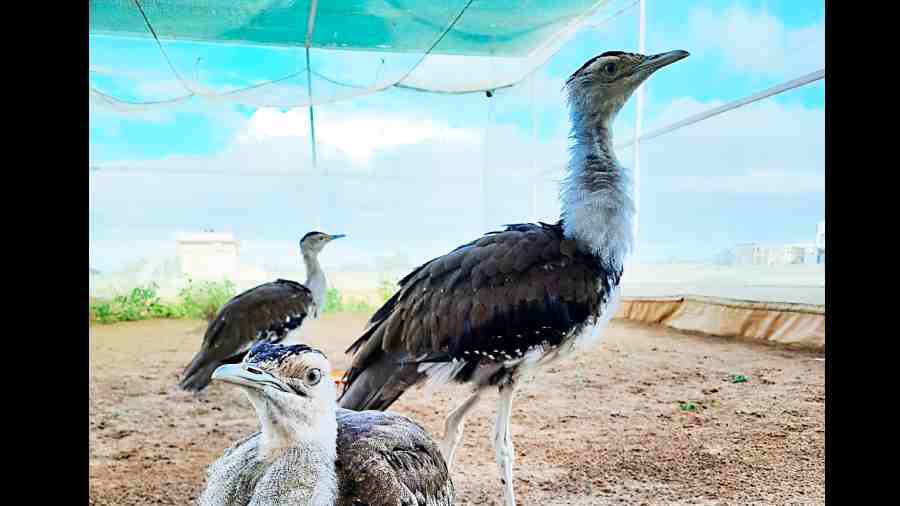 Wildlife scientists have discovered unique versions of genes in the last surviving great Indian bustards outside Rajasthan and recommended their introduction into the bustard breeding programme aimed at pulling back the iconic bird from imminent extinction.

The unique gene sequences would enrich the gene pool available for India’s conservation breeding efforts underway in Jaisalmer, Rajasthan, and enhance the chances that captive-bred birds would do well after release in the wild, the scientists said after a genetic study of bustards.

The study has revealed higher genetic diversity in the estimated 100 to 140 bustards in Rajasthan than in the non-viable bustard populations in other states. Gujarat has less than six bustards, while Maharashtra, Andhra Pradesh and Karnataka together have fewer than 10 bustards. “The populations outside Rajasthan are doomed to extinction,” Yadvendradev Jhala, a scientist at the Wildlife Institute of India (WII) in Dehradun who led the study told The Telegraph.

“But they have unique versions of certain genes that could be preserved by introducing them into the breeding programme.” The conservation breeding programme — launched about five years ago by the Union environment ministry, the WII and the Rajasthan forest department with technical support from the International Fund for Houbara Conservation — involves collecting unhatched bustard eggs from the wild and rearing the hatched birds in captivity for future breeding and rewilding of captive-bred birds.

Telemetry observations on the birds have shown that female bustards re-nest after the egg collection and raise chicks in the wild within the same breeding season. Scientists have estimated India has lost over 90 per cent of its bustard population over the past 50 years, mainly due to the loss of natural habitat to agriculture and industry and from bustard collisions with power lines.

The bustard is among the heaviest of flying birds and is at risk of such collisions. “The bustards in Rajasthan do not represent the complete genetic diversity of the bustard populations in the country,” said Sutirtha Dutta, a bustard specialist and WII team member. The populations in the other states have additional genetic signatures.

Scientists believe the fragmentation of the bustard populations are unlikely to allow natural intermingling. Any possible natural gene flow between the two largest adjacent populations in Rajasthan and Gujarat is unlikely because the Rann of Kutch separates the two populations. In Gujarat, there is no breeding male among the estimated fewer than six birds.

One option the scientists have mooted is to transfer a few female bustards from other states into the breeding programme in Rajasthan in the hope that they will breed in captivity. “Any such transfer will be quite challenging — its execution would require discussions with technical experts and managers. We’re not at a point where we’re discussing how exactly to bring the birds here,” Dutta said.