On June 15 last year, 20 Indian soldiers, including him, had died in hand-to-hand combat with the Chinese during a 'de-escalation process' in eastern Ladakh 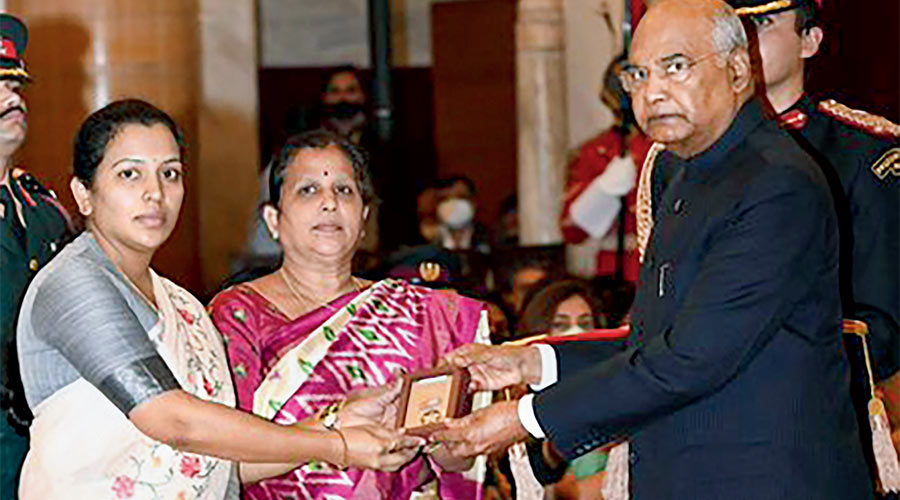 Col Babu was awarded for displaying extraordinary courage and leadership by President Ram Nath Kovind in an investiture ceremony at the Rashtrapati Bhavan. Babu’s wife B. Santoshi and mother B. Manjula received the award.

On June 15 last year, 20 Indian soldiers including CO Babu had died in hand-to-hand combat with the Chinese during a “de-escalation process” at the Galwan Valley in eastern Ladakh.

Four days later, Prime Minister Narendra Modi had declared that none had forcibly entered Indian territory or occupied Indian posts — a remark never retracted. This allowed Beijing to claim ownership of territory taken over by China and instead call India the aggressor.

Col Babu was the CO of the 16 Bihar infantry battalion of the Indian Army. He had been tasked to ensure that the Chinese move back beyond Patrolling Point 14 in the Galwan Valley.

The President on Tuesday also awarded the Vir Chakra to five other Galwan soldiers who had fought off the numerically stronger Chinese troops. Four of them were awarded posthumously.

Following the Galwan clash, several Indian soldiers had been captured as prisoners of war by the Chinese army. All of them were later released.

Shortly after the clash, India had announced that 20 of its soldiers had been killed. Beijing, however, had acknowledged that the clash had resulted in casualties but did not confirm if any Chinese soldiers had died.

In February this year, the Chinese military said that four People’s Liberation Army soldiers were killed at Galwan.

The scuffle between the two sides on June 15 last year was triggered by an argument over the position of Chinese soldiers who were pitching a tent on the southern bank of the Galwan river near Patrolling Point-14 on the Indian side along the LAC.

The situation turned violent after the PLA troops, all of them armed with clubs, rocks and barbed wire, attacked the Indian soldiers led by Col Babu.

The wartime honours given on Tuesday had been announced by the government on Republic Day this year.