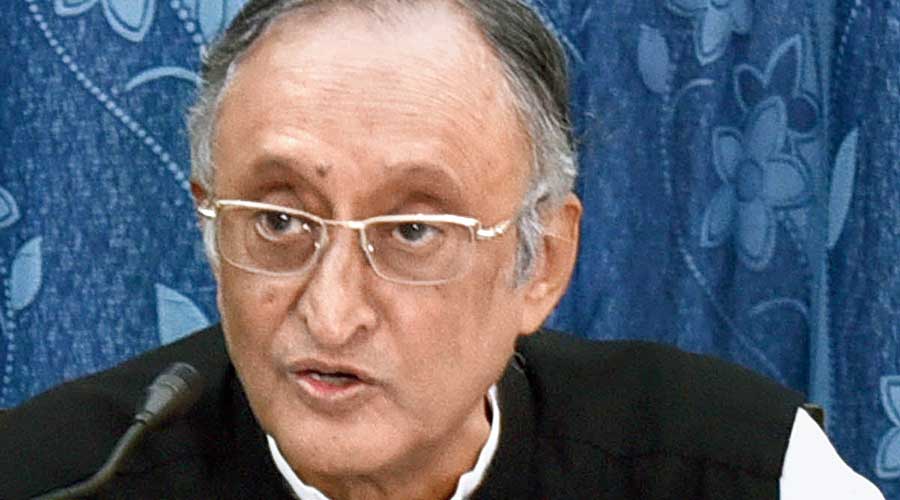 The fraught relationship between the Centre and the Bengal government has spilled over into the GST Council — and ended up raising disturbing questions about Prime Minister Narendra Modi’s pet project Digital India.

At the end of a stormy meeting, the council slashed the tax on the Covid-19 drug remdesivir, black fungus medicine amphotericin B and the anti-coagulant heparin to 5 per cent from the earlier 12 per cent. But it refused to accept Bengal’s suggestion to bring down the rate on the Covid vaccines to zero from the existing 5 per cent.

In a letter to Sitharaman after the meeting, a seething Mitra said the Centre had delivered a “major blow to the spirit of cooperative federalism” by refusing to let him voice his views.

“You gave the floor to the minister from Uttar Pradesh who sought deletion of some of my comments by name and shockingly you agreed,” Mitra said in his letter. “This and other instances in today’s GST Council meeting have dealt a major blow to the spirit of cooperative federalism undermining the very ethos of the GST Council.”

Mitra told The Telegraph later in the evening: “What happened today is most shocking. I raised my hand; I screamed to register an official dissent to the decisions taken at the end of the deliberation. But I was not allowed to speak. Maybe they had muted me.”

Late in the evening, minister of state for finance Anurag Thakur claimed that Mitra’s video connection was not stable and he could not be heard.

Thakur’s comment on the state of Mitra’s connectivity cast a shadow on the Modi government’s Digital India campaign and underscored its failure to create high-speed Internet and data networks that can seamlessly patch people who have become increasingly dependent on video-based communications.

Trouble apparently erupted when Mitra tried to say that the Modi government had completely mismanaged the pandemic.

“I pointed out that the majority of the deaths took place January 16 onwards and at least 40 per cent of those could have been averted if we had an effective vaccine policy and we would not have to see bodies floating in the river,” Mitra said.

That comment proved a red rag for Uttar Pradesh which has been facing a lot of flak after bodies were buried on the banks of the Ganga and corpses were found floating down the river.

Uttar Pradesh finance minister Suresh Khanna leapt to his state’s defence and demanded that Mitra’s comments be struck off. Sitharaman agreed and closed the meeting in a hurry.

Mitra was livid at the manner he had been cut short. “I should have been allowed to respond since the UP minister referred to my comments. But she (Sitharaman) did not do so and the meeting was closed. This has never happened before.… This is a blow to the principle of cooperative federalism,” Mitra told this newspaper.

Later, Thakur, the junior minister in Sitharaman’s ministry, tweeted: “It seemed as if the Finance Minister from West Bengal did not have a stable VC connection. The revenue secretary repeatedly informed him his line was breaking — that he was not properly audible and that he should turn off his video for better connectivity.”

“During the speech made by the Uttar Pradesh Finance Minister, nobody heard Dr Mitra speak. Nor did he ask to have his opinion heard. Other members can attest to this,” Thakur added, without explaining how Khanna, the Uttar Pradesh minister, could hear Mitra so clearly that Khanna felt compelled to respond.

Thakur said: “At the end of the discussion, when FM Sitharaman asked the Council whether anyone would like to speak & add their comments, Dr Mitra again remained silent and did not speak up. The Finance Minister has never stifled dissent in the GST Council. It is unbecoming of a senior member of the Council to suggest that this has happened. The GST Council embodies the collective spirit of all states towards debate in a healthy manner; it has been & shall continue.”

At the end of the discussion, when FM @nsitharaman ji asked the Council whether anyone would like to speak & add their comments, Dr Mitra ji again remained silent and did not speak up.

In response to a question from this newspaper on Thakur’s tweets, Mitra said on Saturday night: “They heard me all right when I spoke during my turn. But they now say they could not hear when I protested. If that’s the case, they should find out who muted me.”

Mitra’s letter put a different interpretation on the nature of the deliberations at an extremely fractious meeting that Sitharaman tried to suggest had been able to achieve broad consensus.

The Bengal finance minister described the decisions taken at the GST Council meeting as “anti-people” and ones that had “left him with no option but to record my dissent”.

He accused Sitharaman of deciding “not to agree with the suggestions of so many ministers and your final remarks contained some cosmetic modifications of the recommendations of the Group of Ministers (GoM)”.

Mitra rubbished the Centre’s claim that a consensus had been hammered out at the meeting. He said that at least seven states, including Tamil Nadu, Punjab, Jharkhand and Chhattisgarh, had demanded a zero tax on vaccines and, alternatively, had proposed a nominal 0.1 per cent tax on Covid-related items.

The finance ministers from Punjab, Chhattisgarh and Kerala backed Mitra’s insinuation that the decision of the GST Council was far from consensual.

“The GST’s Group of Ministers should stop acting like a shahenshah of yesteryear and instead let compassion speak through its decisions,” Punjab finance minister Manpreet Singh Badal said.

Badal said he and several other finance ministers had vehemently opposed the imposition of GST on Covid-related items during a national crisis and claimed they had all recorded their dissent.

“The alternative was to charge a token 0.1 per cent, which is well within the powers of the GST Council. This measure should have been adopted till the pandemic is over,” he said.

Sitharaman had contended in the past that a zero tax presented a devilishly complicated problem since it would have to cover a barrel-load of items across the value chain to be really effective.

The GST system works on the basis that firms are able to claim credit for the taxes they pay on the inputs they source. The government argues that a zero tax regime on some items will seriously wreck the tax credit claims.

The Opposition had suggested that a token 0.1 per cent tax would solve the problem — a suggestion the Centre has ignored.

Chhattisgarh finance minister T.S. Singh Deo said the Council had adopted a “majoritarian approach” which went against the principle on which the GST regime was founded: no decision can be taken unless everyone agrees.

“The approach now seems to be that the fitment committee (a caucus of bureaucrats) decides on the rates and the Council is expected to act like a rubber stamp. This is disappointing,” Singh Deo added.

Kerala finance minister K.N. Balagopal too had lobbied for a zero tax rate on vaccines and suggested that if this was not possible, the Council could set the tax rate at 0.1 per cent.

“That way the government could have managed to circumvent the requirement of amending the law and yet provided a much-needed tax relief for these products,” said an official privy to the developments at the two meetings.